DIY Follies
July 2015
WRITER:
Stratton Lawrence
A home-improvement newbie on the trials and errors of his first fixer-upper 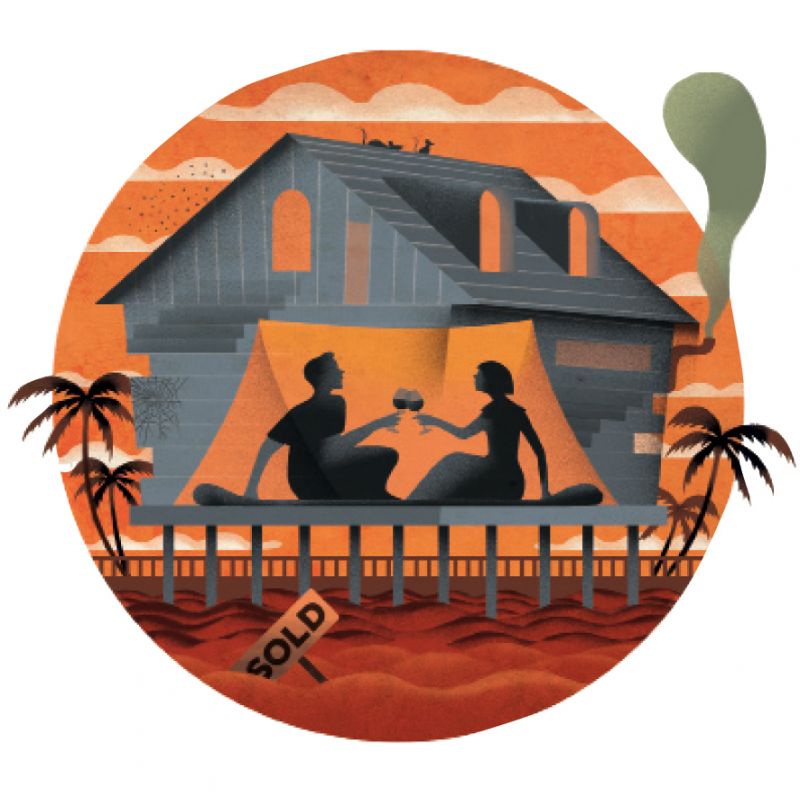 When my wife, Hunter, and I began shopping for our first house, Folly Beach was not an option. Granted, we lived there, renting a breezy two-bedroom with views across the Atlantic, but a winter lease on the Edge of America is just a temporary taste of the good life. The leap to home ownership would require stepping back into the burbs—freelance writer pay does not a beach homeowner make.

But then I got a real job, doing the same editing I’d kept busy with for years, for the same pay, just with the added benefit of a W-2. The bank suddenly became much more generous. With our search for the perfect “forever or at least for the next few years” home not turning up any winners on James or John’s islands—and the countdown on our lease quickly dwindling—we took a look at the options (all three of them), now (barely) within our budget on Folly.

One had a semipermanent lake beneath it. Another had a caved-in ceiling and structural issues. And then there was the Goldilocks house: a cozy little cottage built in 1940, with a freestanding garage and an additional downstairs suite. Perhaps other house hunters couldn’t see “just right” through the detritus of five human tenants, three dogs, moldering walls, and a colony of active termites—all we saw was the marsh view.

On our first night after closing, we popped open a bottle of champagne and watched the sunset from the back deck, reveling in our good fortune. Then, we went inside to spend the evening ripping up the rank old carpet and hauling it to the curb.

Perhaps other house hunters couldn’t see “just right” through the detritus of five human tenants, three dogs, moldering walls, and a colony of active termites—all we saw was the marsh view.

Thus began the great camp-out of summer 2014—and beyond! Our bedroom was a mattress on the floor of the front porch, our living room furniture consisted of two beach chairs, and meals were taken on the deck. Our friends and family stopped by to congratulate us, and everyone shared a common reactionary word: “Potential.”

“I love it, but this is a lot of work,” they’d say. “Are you going to hire someone?” Not having yet learned that not all do-it-yourself jobs are  worth doing yourself, I would counter, “Isn’t that what YouTube is for?”

A bit naïve? Sure. But being smart enough to recognize potential rental income in the suite, we threw a couple of area rugs over the newly exposed, ’80s-era linoleum floors and focused our energy downstairs.

With vigor, I tore out moldy walls that disintegrated in my hands, noting the stain from Hugo’s high-water mark about two feet off the ground. Within weeks, I had slapped up new walls, replaced rotting trim, and given every inch a fresh coat of paint, as we were anticipating our first out-of-town guests by midsummer.

And that’s when the DIY epiphany hit me: As the big problems are solved, a million tiny, previously unnoticed details become glaring and unbearable. Just as the last coat of paint went on the new moulding—at around 11 p.m. on a Friday night—we realized the floors had to go. I yanked up one corner to discover the world’s most unforgiving sticky glue. Below it were vinyl tiles, permanently anchored to the concrete floor. After Hugo, the former owners had simply laid new carpet over the mess, kicking the can to a future generation.

This was not the quick-and-easy removal job we’d enjoyed upstairs on our first night. After 10 minutes prying with a crowbar, I’d lifted about five square inches. The next month became a blister-ridden fury of frustrated scraping. The stubborn vinyl snapped off Sawzall blades like twigs, requiring a heat gun to loosen the glue and a second body to vigorously attack it with a roof scraper. I finally broke down and hired some help in front of Bert’s Market, paying them $15 an hour and unlimited Tecate.

As the vinyl came up, a bigger problem surfaced: the concrete floor was cracked, a deep furrow in the middle of the room. If we wanted even floors, I’d have to sand down the concrete and refill it to level. After my tenth-or-so $300 trip to Lowe’s, I tore into the floor with my new angle grinder and diamond blade. The concrete cut like butter. Through the haze of dust-covered goggles and a face mask, I blasted away into the night.

With the job complete, I stepped back to admire my work and realized that hanging plastic sheeting would have been a smart move. From the kitchen shelves to the windowsills, every single exposed surface in the entire downstairs was covered in a thick film of dust.

It was well into October before I’d wiped away the mess, reinstalled the trim, repainted the walls, and taken my first barefoot stroll across our pretty new “wood” laminate floors. A friend moved in and was promptly joined by a water leak pouring through the ceiling (cue new trim and walls, again), followed by a massive septic backup, and a relentless, extended family of carpenter bees.

We’re chipping away at the daily challenges and taking a break before diving into the upstairs this fall. We can live a few more months with area rugs and linoleum and sleeping on a mattress on the floor. For now, we’re content to sit in our beach chairs on the back deck (freshly pressure washed!), sip cold ones, and gaze out to the river in our backyard. We’ve got a house by the water and know we’re lucky enough.