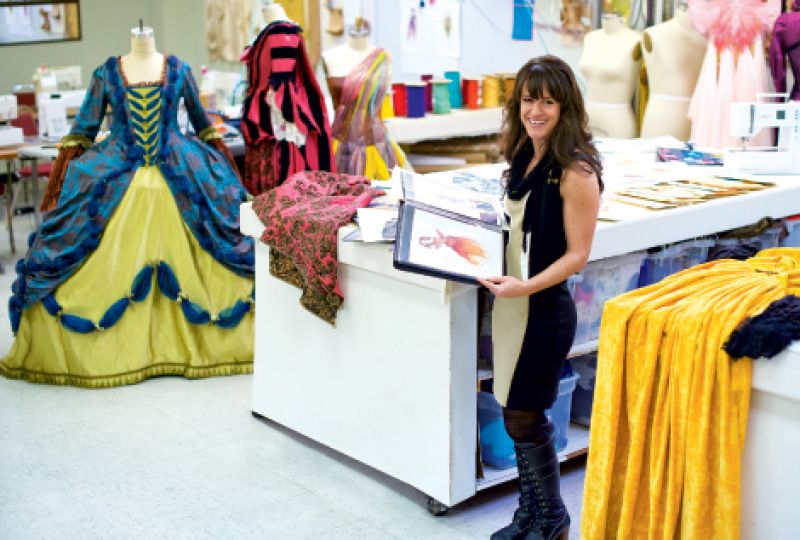 College of Charleston costume design professor Janine McCabe started her undergrad career as an engineering major. But when she transferred to CofC sophomore year, she took a job as a stitcher in the theater department to make extra cash—and realized she loved the work. She switched to studying costume design, ultimately earning an MFA in the subject from University of Virginia, and then moved to New York City, where she worked with Tony Award-winning Broadway costume designer Martin Pakledinaz. Since returning to the Holy City in 2006, she’s designed costumes for local and national groups—from PURE Theatre and Charleston Stage to New York’s Connelly Theater.

Design process: I start with reading and analyzing the play and move into discussions with the design team and director. There’s a lot of research involved, ranging from emotional response to characters and themes to the specifics of the people, clothing, and movement of the time period. I draw each character to communicate my costume ideas, and I locate fabrics to use. Then I work closely with the costume shop on planning and fitting each piece on the actors.

Favorite project: Last year, I designed Zelda at Flat Rock Playhouse in North Carolina. It’s a musical I have been involved with since its first full production in 2005 as part of the Philadelphia Theatre Alliance. Being the first one to envision the characters adds extra appeal in designing. You also don’t have to hear phrases like, “well on Broadway they wore….”

Current work: I am designing for a dance piece being choreographed by Eliza Ingle that’s part of the College’s Spring Dance Concert from March 15-17. I’m also in the research and drawing stages on a production of My Fair Lady at Flat Rock Playhouse.

On fashion design: I don’t get wrapped up in what individual fashion designers are doing but am intrigued by the way people express themselves through fashion. Clothes can empower us, and they help tell our stories.

Personal style:  I do a lot of thrift store and vintage shopping, and I try to look good because if I’m dressed well—in a way that makes me feel good—I can better handle the challenges that come my way.

Best part of teaching:  The students! Those moments when they make a connection, they solve a problem, and even when they fail but don’t quit—what could be better than being part of making all that discovery happen?

In her off-hours: I love the beach, so my partner and I try to spend time there as often as possible. I also love to eat, so we enjoy trying out the many awesome restaurants here.

Secret to scoring a spot among Oblique Magazine's top six finalists for best abs in Charleston: Since juggling all these projects and teaching can be stressful, I use exercise to help keep me balanced. Typically I workout with weights and cardio six mornings a week plus some yoga to clear my mind. And this job keeps me running all day, so that’s probably part of the secret!