Appetite for Design
August 2011
WRITER:
Kinsey Gidick
It’s dinner and a show at the Avondale Mellow Mushroom, where the kitchen is the stage 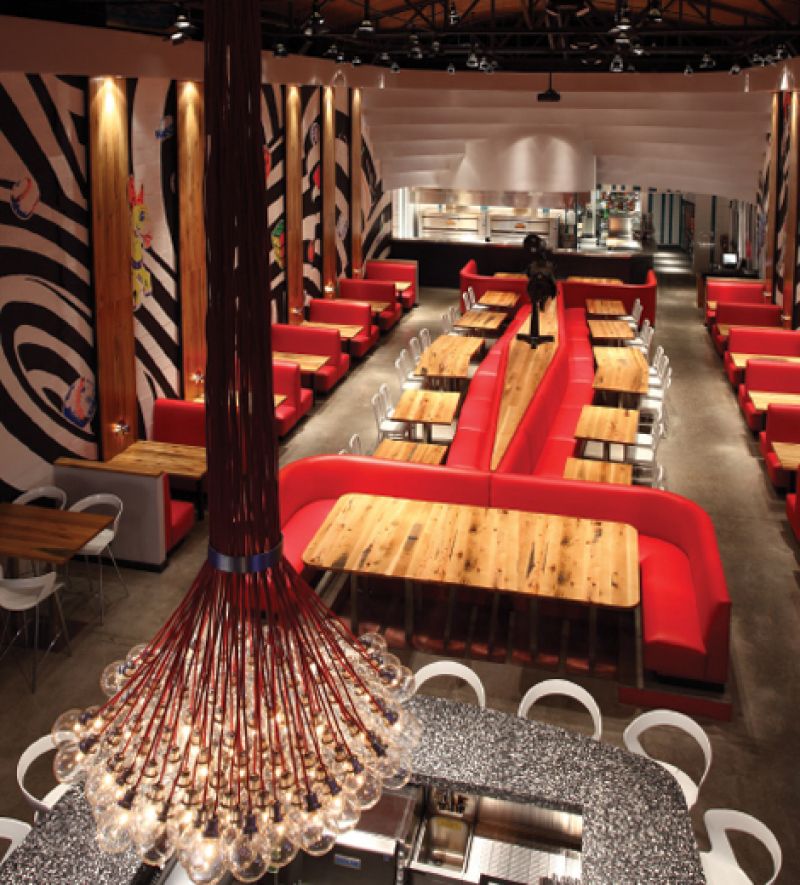 Dining out isn’t just about having a meal, it should be an experience; a performance even. That was the M.O. of local Mellow Mushroom owners Michael Shemtov, Joshua Broome, and Johnny Hudgins when they decided to give their King Street restaurant a sister eatery in West Ashley. What better place to put on a culinary show, they thought, than in a circa-1950 movie house—the former Ashley Theater.

After five months of extensive rehab by Atlanta’s Seiber Design, Inc., the open kitchen takes center stage, outlined in a tiered proscenium. The balcony, updated with tables as opera boxes, overlooks the busy dining room below. Guests are greeted by artist Sully Sullivan’s life-size photos of locals draped in historical garb—the pièce de résistance being chef Sean Brock as King Charles. Beyond, creative director Carl Janes’ hyper-color murals of popcorn, dice, and a Buddha reach from floor to ceiling. But the reason the fanciful motif works is in more than what meets the eye. The team credits the balance of fun and functional with meticulous planning and Seiber’s rapid blueprinting, which allowed them to vet dozens of floor plans at once.

“It’s easy to draw something beautiful, but then you have to say, ‘What happens when 700 people a day are in that drawing? Does that still hold up?’” Hudgins says. The proof is in the pie. Avondale offers the same great Mellow Mushroom taste, but in a new dining as performance art experience.