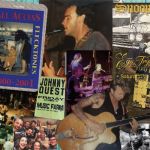 Music Farm Fresh: The storied concert venue is slated to reopen under new management after being closed for two years

Revisit the Farm’s beginnings as a renegade club, the countless bands who struck a chord there, and many rocking good memories