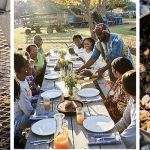 What BJ has on his plate, including pop-up dinners at Joseph Fields Farm, as well as a cookbook and brick-and-mortar in the works