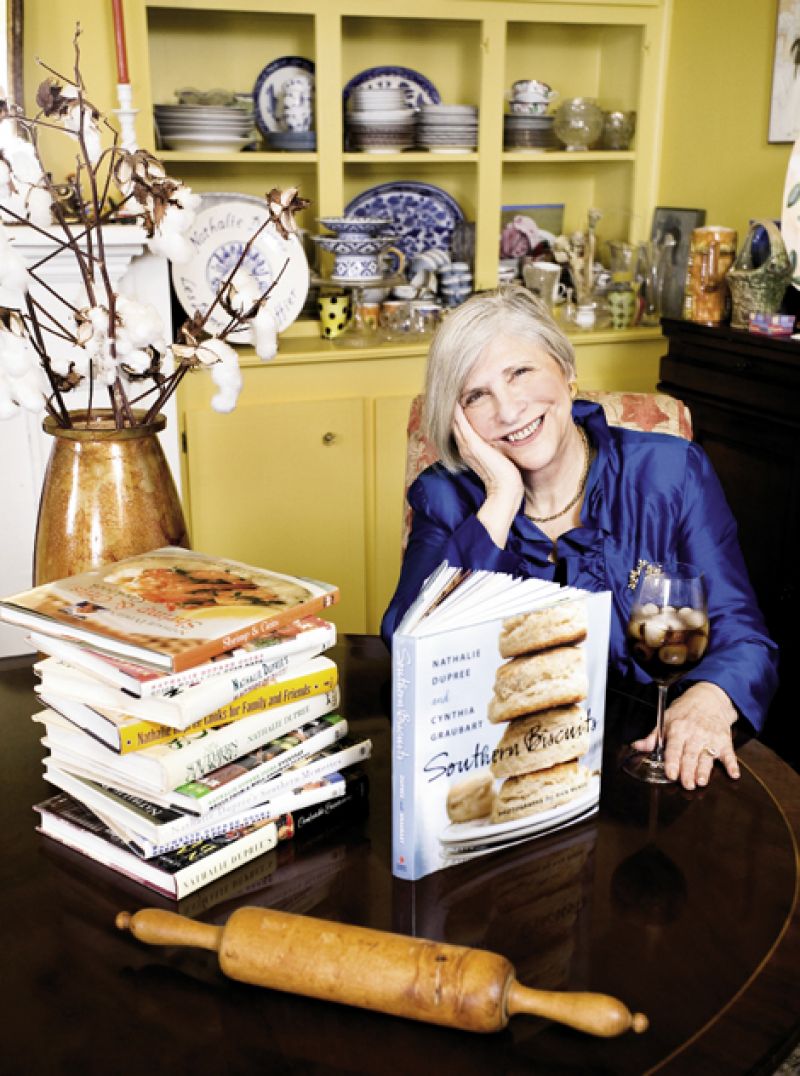 My first job in a professional kitchen was in 1992 on Nathalie Dupree’s Atlanta-based PBS cooking show, Nathalie Dupree Cooks. Stepping into her world as a scared, unpaid apprentice, I may have washed a lot of dishes, but I instantly knew I had found my calling. In her mother-hen fashion, Nathalie calls her protégés her “little chickens,” and she infused this little chick with her knowledge, passion, and skills. A demanding and diligent instructor, she would make me whip egg whites by hand with a big balloon whisk in her copper bowl. Egg whites, when properly whipped, will cling to the bowl even when turned upside-down. Nathalie would tease me by perching the bowl above my head and asking if I was certain the job was done correctly. (Not once, by the way, did they plop onto my concerned crown.)

During her career—which has spanned two generations—Nathalie has helped legions of cooks find their way, and that includes professionals such as myself, cookbook author Rebecca Lang, and award-winning food scientist Shirley Corriher. But first and foremost, Nathalie is the champion of home cooks. Through her 11 books on American Southern cooking, entertaining, and technique; more than 300 cooking shows on Food Network, The Learning Channel, and PBS; and a decade of classes at Rich’s Cooking School in Atlanta, which she founded and directed, she’s taught countless people how to feed themselves and their families. Her books belong in the soul of the house—the kitchen—not the coffee table. Many a cook made her first biscuit with Nathalie by her side in the sauce-splattered pages of her well-written recipes. Without a doubt, she is the preeminent authority on Southern food and cooking alive today.

In recognition of her extensive influence and achievement, Nathalie was recently awarded the prestigious title of “Grande Dame” by Les Dames d’Escoffier International, a worldwide philanthropic society of professional women leaders in the fields of food, beverage, and hospitality. The invitation-only membership, composed of 28 chapters across the United States, Canada, and the United Kingdom, is highly diversified and reflects the multifaceted fields of contemporary gastronomy and hospitality. The Grande Dame, only awarded every two years to the absolute crème de la crème in the industry, is a tremendous honor. Past recipients include culinary legends such as Julia Child, Marion Cunningham, Marcella Hazan, Edna Lewis, and Alice Waters.

For the past decade, Nathalie has lived with her husband, Jack Bass, in a downtown Charleston single house. There—surrounded by a battalion of teacups, mountains of cookbooks and culinary magazines, and an enviable collection of asparagus tongs—she continues her work: testing biscuit recipes or whipping egg whites with her most recent apprentice, on her laptop writing and researching, playing host to visiting authors and dignitaries, and even running for U.S. Senate. Her universe seems like utter chaos, but there she is at the center, calm as the eye in the storm.

Her friend Pat Conroy once wrote that Nathalie was “more like a fictional character than a flesh and blood person.” That still makes me howl with laughter. But, it’s not just because she’s a culinary icon or that she comically putters about, uttering adages such as, “If I were the woman I wish I was” or “Do as I say, not as I do.” It’s because it’s impossible to imagine that anyone could actually be as generous with her time, passion, and expertise as she is and be a real live person.

Nathalie is a true Southern treasure and a Grande Dame indeed.