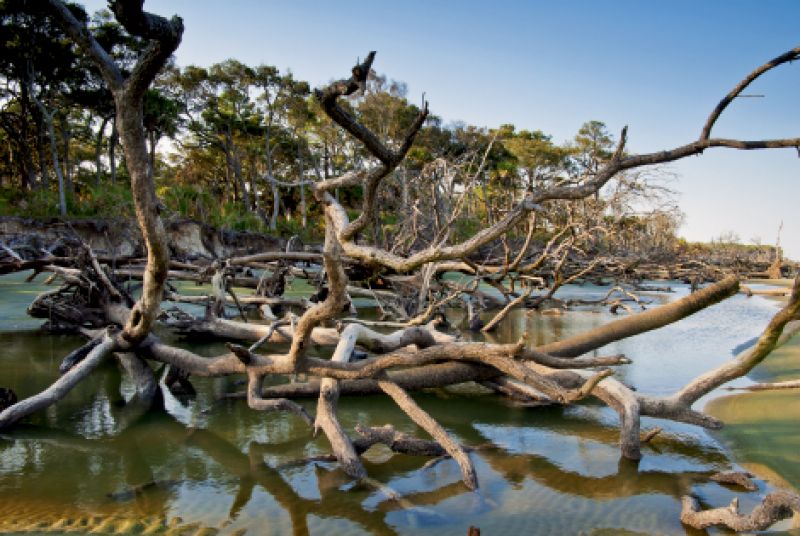 Years ago, a friend told me about heading down to Hunting Island (16 miles seaside of Beaufort, between Saint Helena and Fripp islands) to camp on the beach with her beau. It sounded ridiculously romantic, even more so when I found out there were waterfront cabins to rent. The wait was so nuts for those that I gave up trying to book them, and since then, erosion has claimed all but one.

Cabins or none, her descriptions of the place pulled on me—it has a wild boneyard beach, marshy lagoons that doubled for Vietnam in Forrest Gump, and an 1875 lighthouse, the only oldie we can climb in South Carolina—so I drove down a few Sundays ago.

I paid my entry fee to the state park and aimed for the lighthouse so I could scoot up its 167 steps to get my bearings. Exploring that structure alone was worth the hour-and-45-minute drive. The island has had a lighthouse since antebellum days, as the waters go from deep to a shallow minefield of sandbars relatively quickly. The first lighthouse was finished in 1859 but blown up by Confederates in 1861 so the Union couldn’t benefit from it. In 1875, another was built from interlocking cast-iron rings weighing 1,200 pounds each. The inside was lined with brick walls, and the light was visible some 20 miles out to sea. In 1886, a 7.3 magnitude earthquake hit, strong enough, they say, to empty the water out of a pail that sat inside. The lighthouse survived, but three years later, the shifting shoreline necessitated it be moved a mile and a quarter inland to its current location.

Now all that was fascinating, and the view was amazing, but the exhibitions in the support building really caught my fancy. Black-and-white photos of past keepers and their families spoke to a desolate island life. There was tell of how the keepers—who earned $500 to $700 a year till it was decommissioned in 1933—had to haul 50 pounds of oil up the stairs each day to keep the light lit. And how an unlucky gent saw an enormous snake on the steps one night; he dropped his lantern and shrieked in the dark until the other two lighthouse families came to his rescue. Before we cast him as a Grade-A wimp, know that a snake bite was no trifling thing; Beaufort (and a doctor) was three days away. I saw images of the children who played in the dirt yard; a family in old-timey modest swimsuits; and on-duty keepers in full, suited-up regalia. That these folks donned all the layers of turn-of-the-century city clothes out here in the hot wilderness astounds. Especially, I thought, when I took to the beach.

I hit the spit right behind the gift shop, tucked my day pack between two palmettos within sight of the waves, and headed north. Glory be, the tangled nest of trunks was an authentic jungle gym. To make any headway up the shore, I had to scramble like an ant up, over, and under felled oaks, palmettos, and pines. Once I made it to a lagoon-like area, I could swim in wide-open waters and track animal prints in the sand. How could anyone wear a corset or bloomers in a setting like this?

I only hope that the formality was shed when the cameras were away, though it’s said one keeper dressed for duty, always. Maybe it was to keep the wild at bay, to make him feel less isolated, less apart? Funny how today we strive for the opposite, I thought, tossing myself into the waves wearing next to nothing by his standards while trying to wash away the trappings of the work week in town. In short order, I’d lost track of the time and tide, and had to bolt back, making it to my things just as my flip-flops were floating away. Heading down the highway in a sandy bikini with my sundress flapping out of the sunroof to dry, I wondered what the next 150 years will erode, besides mores and sand.