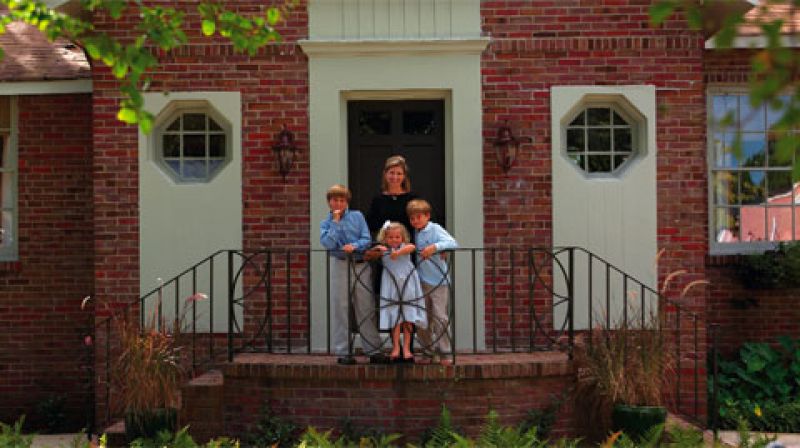 I think it’s fun to have a house that can really evolve over time,” says South Carolina native Courtney Agosti. “I like places with their own identities, and I like things that age. But with three children, my home has got to be liveable.” That blend of dynamic style and adaptability to real life is what drew the busy mom to a circa-1940 cottage in Wagener Terrace. “This was a true exercise in downsizing, as our home in West Ashley had quite a bit more space.”  Agosti chose the rapidly revitalizing neighborhood, once part of Lowndes Grove plantation, for its quaint architecture and its proximity to Buist Academy, where her two sons attend school. “I rode by one day and saw this brick house and thought it looked cottagey and cute. When I walked inside, it just felt good.” Making Room Agosti, a maternity-clothing designer-turned-interior decorator, purchased the house in May 2007, becoming only its third owner in more than 60 years. But in the wake of the previous residents’ long stint there, the structure and decor needed considerable refreshing.  “I’ve worked on a couple of renovations before, but this is the first one I’ve done more or less on my own,” admits Agosti, who called on Robert Buxton and Richie Johnson of Buxton Construction and finisher and detailer Tim Matthews for help with the four-month project.  After much-needed electrical and AC updates, the team set to work making a series of seemingly minor adjustments to the downstairs layout. “This renovation was about lots of small changes that added up to one big improvement,” says Agosti, citing examples like the overhaul of bathrooms, replacement of dated materials, and creative space planning. “A primary focus throughout the project was how to fit everything we needed,” Agosti says. “Because the house is smaller than our old one, so many of the improvements were made with efficiency and organization in mind,” she explains, and points to the kitchen and laundry room as prime territory for these considerations. Here, she added cabinetry for appliances and extra storage. A low countertop in the laundry room provides space for the kids to decorate cookies (a favorite activity) and to make their lunches, while underneath are cabinets for stashing backpacks and other on-the-go gear. To improve the visual symmetry of the rooms, Agosti removed the arched tops of several doorways and shifted the door connecting the kitchen and laundry room to line up with an exterior door. Paneling was laid over the plaster ceilings in those rooms and in the adjacent sunroom, where the kids eat breakfast and do their homework. “I knew that this is where we’d be most of the time, and I thought the paneling helped to marry the rooms,” she says. The paneling also covers the sunroom walls, which had to be stripped to the studs after the contractor discovered rot beneath the vinyl wall coverings. The second story only needed minimal attention, including the revamp of a bathroom. The loft-like area, with its narrow sitting room and two bedrooms, was a key factor in Agosti’s house choice: she envisioned it as a haven for her sons, where they could play video games and “just be boys.”   A Lighter, Brighter Palette Once the structural work was finished, Agosti utilized a palette of clean, light colors to brighten the overall atmosphere of the house. To help reflect natural light, she placed mirrors in strategic locations: on the refrigerator doors, covering one wall of the powder room, and in a pair of French doors leading to the master bedroom.  Agosti also took measures to revive and repurpose old spaces and objects throughout the house. In the downstairs hallway, a built-in glass-front cabinet houses her prized shoe collection. In the kitchen, the louvered pantry door was replaced with an antique glass-and-wood panel, providing a peek into a china closet stacked with dishes and silver, and antique lamps from a Ford Model A found new purpose when mounted in the boys’ bathroom. “You can’t put your makeup on by the light of those,” Agosti laughs, “but it’s fine for the boys. They’re not shaving yet!” It’s these creative-minded solutions and many more that allow the old cottage to function as a modern home to the bustling family of four. “Now, we fit pretty well into this house,” she says. “We don’t need a lot of space, but we actually use every room. We made good use of what we have.”