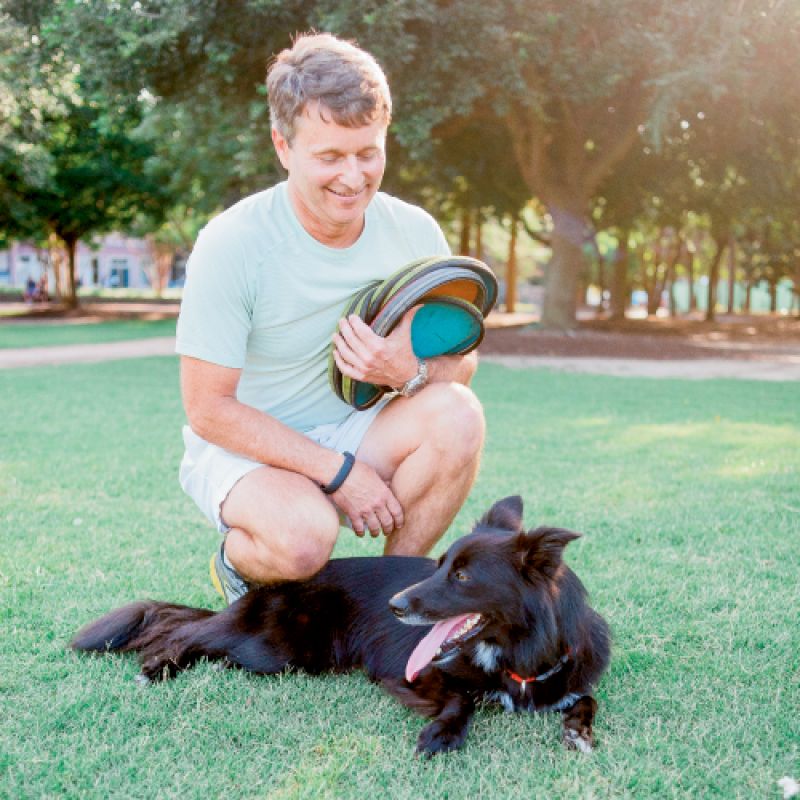 When accountant Rudy Thomas got his border collie, Dicksie, it wasn’t because the breed is known for intelligence and agility. He simply wanted a dog that could keep up with him on his daily three-mile runs around the peninsula.

Thomas soon discovered just how smart Dicksie really was, training her to catch Frisbees, jump onto his shoulders, and turn flips in the air. When Dicksie passed away from a neurological disease, Thomas was devastated. After a year, he contacted a breeder in Arizona who offered him Nima (Thomas, an avid yoga practitioner, named her after the Tibetan word for “sun”).

Now nearly two years old, the 32-pound Nima has aptly filled her predecessor’s collar. Each morning, she joins Thomas on a jog before he heads to his office at Dixon Hughes Goodman. His mother, Anne, walks Nima in the afternoon before he arrives home from work for their daily stroll down King Street to Marion Square, where they often spend an hour training and catching discs.

Nima is constantly greeted by name as they walk past shops and restaurants. “The socialization is a big part of why she’s so friendly, and the walks and tricks help her burn up energy in a useful way,” explains Thomas. “When you’re spending one-on-one time practicing tricks, that’s the only time when a dog is 100 percent sure about what they’re supposed to do.”

Although most dogs can’t leap as high as a small border collie like Nima, Thomas offers this advice for any dog owner trying to teach their pal a new skill: “Pay attention to what they’re already most comfortable doing and build your tricks around that.”