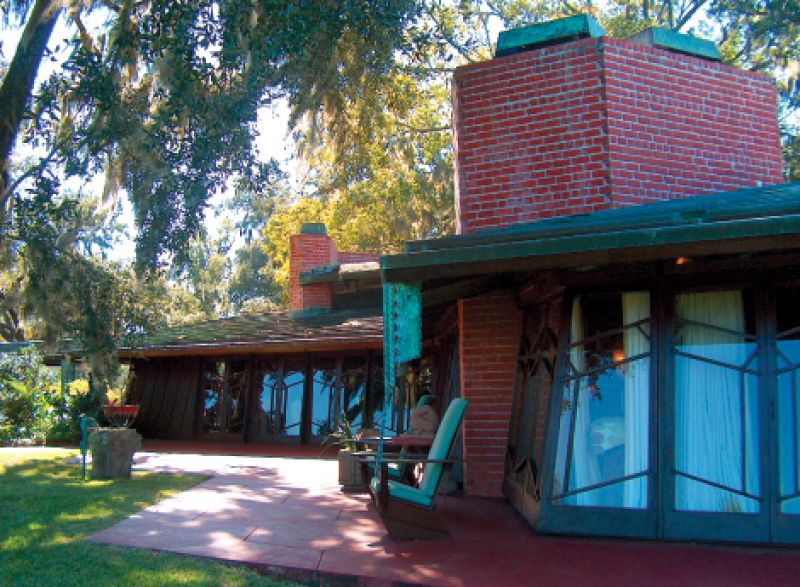 Auldbrass, the only plantation house Frank Lloyd Wright ever designed, sits on a cypress pond deep in the woods near Yemassee and the Combahee River. An elegant dash on the Lowcountry landscape, it reflects the architect’s focus on creating buildings that seem to grow naturally from their surroundings. Warm cypress walls slant inward nine degrees from floor to ceiling, echoing the lean of the lawn’s live oaks. Copper downspouts resemble hanging Spanish moss. At night, light through the prevalent glass in the geometric buildings make them glow like Japanese lanterns.

And when Wright’s unique vision of a Southern plantation home opens to the public biennially—as it will this November 5 and 6—tickets sell out in days. “The American public and others have learned to appreciate what a genius Wright was,” says Hilton Head-based architect Tom Crews. “His work has earned him a significant place in architectural history.”

Among the 1,141 buildings Wright designed over seven decades is Auldbrass, which businessman Charles Leigh Stevens commissioned in 1938. Construction began two years later but was complicated by changes, additions, money, and the shortage of materials during World War II. When the architect died in 1959, his plan for 18 buildings on the property was unfinished.

By the time Hollywood film producer Joel Silver bought the place in 1986, the house was dilapidated. “Nature was going to be the wrecking ball,” says Crews. “Critters decided to camp up there, and they didn’t have the same respect as human beings.”

Silver set about restoring the property with the help of Eric Lloyd Wright, Frank’s grandson. In recent years, he began constructing outbuildings and guest houses from Frank Lloyd Wright’s original plans, says Crews, who signed on to help in 1990. Silver has added his own critters to Auldbrass, including zebras, birds, longhorn cattle, and a pygmy hippopotamus. Visitors might catch a peek of them during November’s tours, proceeds from which benefit the Beaufort County Open Land Trust.