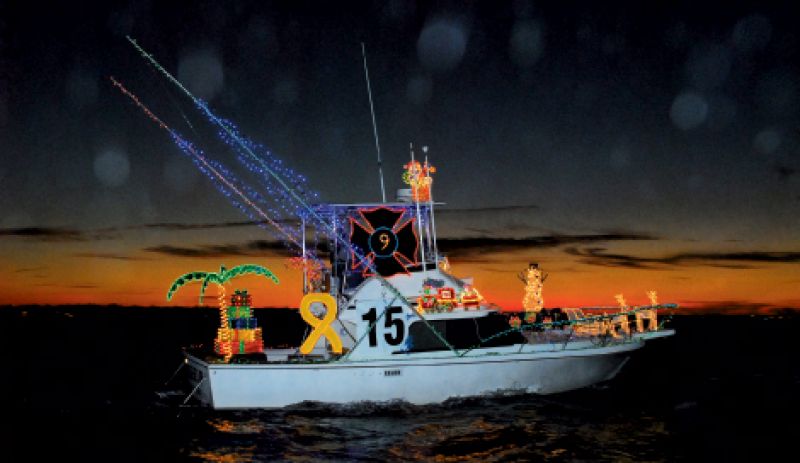 I started off in life as a Christmas light snob—small, slender, white twinkling bulbs only, thank you very much—and bullied myself into the Chief Light Hanger and Master Garland Draper positions very early on in my family. Though I conceded to let others hang ornaments, it was not without direction, and I most assuredly edited their work. While I’m sure my early obsessive compulsiveness in the décor department paved the way to the styling jobs I later did for magazines and catalogs, I’m also sure my dictatorship was pure hell on our household’s holiday spirit.

So it isn’t without eye rolls that my family now hears me gush about Charleston’s Holiday Parade of Boats. If you’ve ever gone, you know it’s pure small-town charm. Everything from canoes to dinghies, rowboats, johnboats, motorboats, sailboats, pontoon boats, and yachts don pretty much any glow-in-the-dark or sparkly thing that can be strapped down. The bulk of the vessels—at least those numbered and in the competition for best-dressed—convene near Patriots Point, cruise along the Ravenel Bridge, then to the Aquarium, along Waterfront Park, past the Battery, and to the Coast Guard Station at the end of Murray Boulevard. The smaller crafts—usually the man-powered ones—often join in at the Aquarium and are merely there for the cheer. (It’s no accident it happens the same weekend as the King Street parade, where pretty much anyone with some tinsel, a pickup truck, and a poster board sign can become a float.)

And this display is something to behold. For years I ached to be in the parade but was stranded ashore with a killer recurring winter sinus infection. That meant I couldn’t brave the icy temps and sweaty nighttime row, but I could help decorate my rowing group’s yawl boats. We wrapped the oars with red- and green-striped rope lights to create a port and starboard candy cane effect; we duct taped white lights to the gunnels; and one December, I fashioned a red, blue, yellow, green, and purple tree out of bulbs for our dinghy. Maybe it was the team effort—the contagious enthusiasm of a crew who sported Santa hats while dressing the boats for hours on end—or maybe it was the sinus fever, but after all that, white bulbs seemed pretty boring. And even déclassé in their own right.

Especially when I took my hot chocolate-toting place along the railing at Waterfront Park with the rest of the landlubbing crowd. There came glowworms, kayaks that when lit from within went from daytime orange, pink, purple, and yellow to something otherworldly and ethereal; a dragon boat with its beastly head lit up; and motoring boat after boat drenched in the most fabulously gaudy layering of colored lights seen this side of Vegas. Some of the creations are clearly professional—palmettos sprout off bows; Santa and Mrs. Claus suits dance about; and diving dolphins pull sleighs better than those in any festival of lights—while others look like someone broke into the hot toddy bar way before cocktail hour and threw a tangled mess up the mast. As for the mix: it’s divine.