Team Van Liew
August 2010
WRITER:
Harriet McLeod
For the better part of a year, Mount Pleasant mariner Brad Van Liew will be the lone skipper on a rolling horizon of gray-green swells as far as the eye can see. He will fight doldrums and dodge icebergs. He will beat his brains out to windward, care for his vessel, exist on dehydrated food, and try to sleep despite being soaked to the core. He will make his way across the equator and back—all in an effort to win the world’s oldest and toughest solo round-the-globe yacht race. Again. In mid-October, when Brad hits the start of the 2010-2011 Velux 5 Oceans race off La Rochelle, France, he will sail alone on his 60-foot racing machine—but he hasn’t charted this course entirely on his own 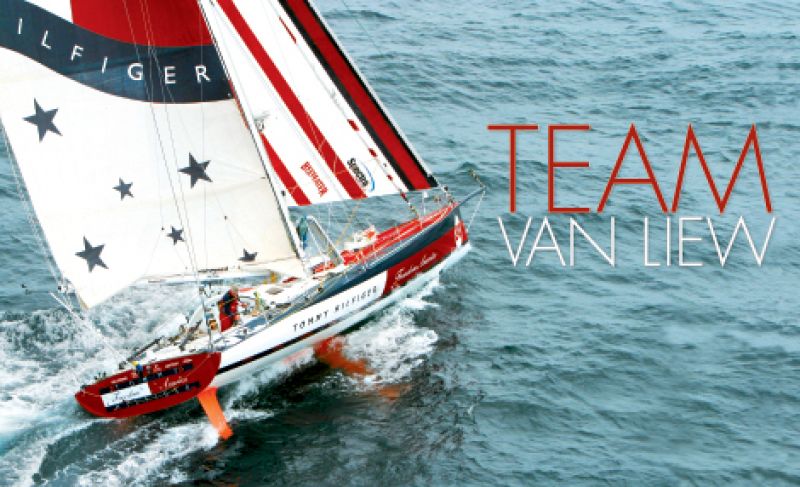 His wife, Meaghan, who is serving as public relations and marketing director of Brad’s racing campaign, and the couple’s two children, Tate, age eight, and Wyatt, five, will be flying to and living in each race port—La Rochelle; Cape Town, South Africa; Wellington, New Zealand; and Salvador, Brazil—before the race’s penultimate leg into Charleston, which is expected to bring boats into the harbor beginning around April 25, 2011.

For up to two months in each city, the Van Liews will rent a house “where we can have all traveling members of the team in one place,” says Meaghan. “It should make for a real circus at times!” The group includes Brad, when he’s in port; Meaghan; her brother, Brendan Fitzgerald; shore crew Jeffrey Wargo and JC Caso; two or three volunteers from Charleston; and, of course, the kids. The couple has also hired a teacher to homeschool the children, who will have the opportunity to explore the individual cultures of each country and delve into the Van Liew family heritage.

On an oversize world map that sits propped against the dining room wall of the family’s Darrell Creek home, Wyatt has drawn his dad’s route. He and his sister like to trace their fingers along the path they will follow along with their father. And they make plans for adventures in each port. Tate is intent on surmounting the Eiffel Tower in France, while Wyatt has his sights set on climbing a volcano in New Zealand. The elder sibling readily pipes up that she’s looking forward to speaking French, which she’s studied at Ashley Hall since kindergarten. “Tate knows more French than anyone in the family, so she may be our greatest resource at restaurants and stores,” notes Meaghan.

While a container shipped from port to port will carry provisions, tools, replacement parts, sails, and other gear, including kids’ books and toys, Meaghan needs only a laptop, a printer, and a phone for the full-time communications, marketing, and media she’ll be doing along the way. “When reporters find out you’re the wife of the guy who’s offshore, the questions start rolling,” she laughs. “‘How can you let him go do that? He’s the father of your children,’” Brad mimics jokingly. “I don’t let him do anything,” Meaghan corrects. “We decided as a family to do the race because it will provide a truly valuable experience in our children’s lives.”

Now veterans of two around-the-world solo races, this couple knows all about valuable life experiences. In 1992, Brad Van Liew of San Diego and Meaghan Fitzgerald of Chicago, both students at the University of Southern California, met after evacuating from L.A. during the Rodney King riots.  Brad was considering a career in military or commercial flying; Meaghan was making her way into corporate public relations. “I thought, ‘Wow, a pilot. I could travel the world with him,’” she says with a laugh.

A non-sailor, Meaghan knew only a little of the history of around-alone racing, but Brad was passionate about the sport. He’d helped sailor Mike Plant get his boat ready for the 1989 Vendée Globe solo race, then tried to enter the 1990 BOC Challenge himself but couldn’t raise enough money to make it to the start. And though his friend and mentor was lost at sea the same year Brad met Meaghan, he still harbored a dream of racing the globe single-handed. The pair married in 1996 and together reached the decision that Brad would enter the 1998-99 Around Alone. This time, with Meaghan’s communications skills filling his sails and his sponsorship slots, the campaign succeeded. And the couple fell in love with Charleston, which served as the start/finish port for the event.

A sailor since childhood, Brad had previously participated in Grand Prix yacht racing in Newport, Rhode Island, but he was the new kid on deck during that first circumnavigation, finishing third in his class after dismasting off the coast of Uruguay. Then in the 2002-03 race, Brad won his class aboard Tommy Hilfiger Freedom America.

But that wasn’t the reason he left the sport. A few months before the start of the 2002-03 Around Alone, daughter Tate Magellan had been born. “The absolute hardest part about that race was leaving our four-month-old baby. I was literally racing to each port to see her,” recalls Brad. The Van Liews needed family time. “I had to get to know my daughter,” Brad says. “She thought crew member Jeffrey Wargo was her dad because he traveled with Meaghan.”

After settling in Mount Pleasant, Brad and Meaghan were hired to head the S.C. Maritime Foundation and tasked with getting the Spirit of South Carolina built and launched. The codirectors also raised millions of dollars in capital, managed foundation events such as Charleston Harbor Fest and Charleston Race Week, and established onboard student experiences to meet state standards. “There’s no question that we couldn’t have achieved what we have with the Spirit without each other,” says Brad. “We make a good team because we’re so different. Meaghan’s very much a numbers person, and she looks at things with a different filter than I do. I’m the eternal optimist; she’s the devil’s advocate. So we play off each other a lot.” But by 2009, with the tall ship’s sails unfurled, educational programs under way, and the foundation in working order, the Van Liews were looking for a new challenge.

Last year, they left the foundation and launched “Project Lazarus,” the family’s inside name for Brad’s campaign to come “back from the dead” and return to globetrotting on the world’s oceans. “I drove a desk for way too long,” he says, noting that since he stepped back into the sport, he’s feeling younger every day. A bear of a man with a shock of sandy gray hair; a big grin; and a hearty mix of competence, competitive grit, and boyish exuberance, Brad is now deliberately 20 to 30 pounds overweight—on the first leg of the race, he’ll lose half a pound a day.

The Velux 5 Oceans will likely have eight to 10 entries in the new Eco 60 class. “Eco stands for economical and ecological,” he explains. The boats, older Open 60s, have been recycled. Class rules limit the number of shore crew and sails and call for alternative sources of power—solar, wind, and hydro. “Brad is attempting something no one has accomplished in the modern era of ocean racing: sailing solo around the world using no fossil fuels whatsoever,” says Meaghan. He intends to use at least eight solar panels and two prototype hydro generators (whirlies off the back of the boat).

Brad is also the only entrant from the United States, where yacht racing is not supported like it is in Europe, despite the fact that Joshua Slocum, the first single-handed circumnavigator, was American. To finance a ’round-the-world race, says Brad, “you have to jump off the cliff before you know that there’s water when you get to the bottom.” The campaign will cost about $2 million, and though the Van Liews have received thousands of dollars worth of donated equipment from the sailing industry and have a few independent supporters, they haven’t yet found a naming sponsor. “We’re not independently wealthy,” Meaghan adds, “and the whole show requires an enormous amount of support, from grassroots armchair sailors to commercial partners. One of the most difficult pre-race tasks is finding the companies that want to attach their brand to this epic adventure.”

After purchasing a 1998 Open 60 and sailing it home from La Rochelle, the team hauled it out at Detyens Shipyards and refitted it in a North Charleston shed. The vessel—painted bright, “taxicab” yellow and named Le Pengouin, its original moniker from when Catherine Chabaud sailed it in the Vendée Globe—weighs just eight and a half tons, and everything about it says “go fast,” from the canting, tungsten keel to its razor-like twin daggerboards and spearhead-shaped bow. Brad calls it a “weapon.”

That said, safety is uppermost in Team Lazarus’ race plan. Brad says he follows a mantra that Isabelle Autissier coined, ironic seeing as “she’s blown up more boats than anyone else,” he jokes. “There are three objectives: First, get yourself home in one piece. When it comes to your safety, using your brain, and preparation in particular, you have to have the skill set and the tools to come home. Second, bring the boat with you. I always think, ‘If the boat were a living, breathing thing, am I asking her to do more than she can handle?’ Third, win.” He knows, though, that sometimes you have to sacrifice number three—especially when there’s more than just one man riding on this adventure.

The Van Liews are in this boat together. “My competitive spirit often takes charge, but I have two beautiful children whom I adore,” says Brad. “I will definitely be a bit more cautious knowing that they are in the next port waiting for Daddy.”

All of the boats in this year’s race will carry 21st-century media technology including digital cameras, fixed and roaming video cameras, wireless microphones, camera control units belowdecks, HDV recorders, and dedicated media laptops (a far cry from the handwritten notes that Sir Robin Knox-Johnston launched to passing ships with a slingshot in 1968). “The boats will be more connected to the world than ever,” says Meaghan.

Brad plans to chat live with Lowcountry schoolchildren, and local classrooms will follow him around the world, just as they watched the competitors in 1994 and ’98. “State standards for fifth through eighth grades include conservation of energy, land and ocean forms, and weather,” notes Meaghan. “There are some really natural fits that will be fun to have as online connections this time.”

On its website (www.oceanracing.org), Team Lazarus will also offer an Education Station page just for children. Kids can see what the littlest Van Liews are up to through photos and eight-year-old Tate’s “roaming reporter” blog.

Now called the Velux 5 Oceans, this around-the-globe competition is considered the longest race of any individual sport in the world

1982-1983: The BOC Challenge (named for the British Oxygen Company) begins as a single-handed, around-the-world yacht race, to be completed in stages and held every four years. It becomes known as The Ultimate Solo Challenge. Winner: Philippe Jeantot

1994-1995: The BOC Challenge starts and finishes in Charleston. Winners: Christophe Auguin, Class I; David Adams, Class II. Josh Hall’s boat sinks on Leg 1 to Cape Town; he is rescued by racer Alan Nebauer. Isabelle Autissier’s boat sinks off Australia; she is rescued by an Australian Navy ship. Harry Mitchell is lost at sea in the Southern Ocean.

2010-2011: The Velux 5 Oceans begins October 17 in La Rochelle, France, and will finish there next spring. The event marks the premiere of the Eco 60 class, which encourages the environmentally friendly redesign of Open 60 yachts launched before 2003.