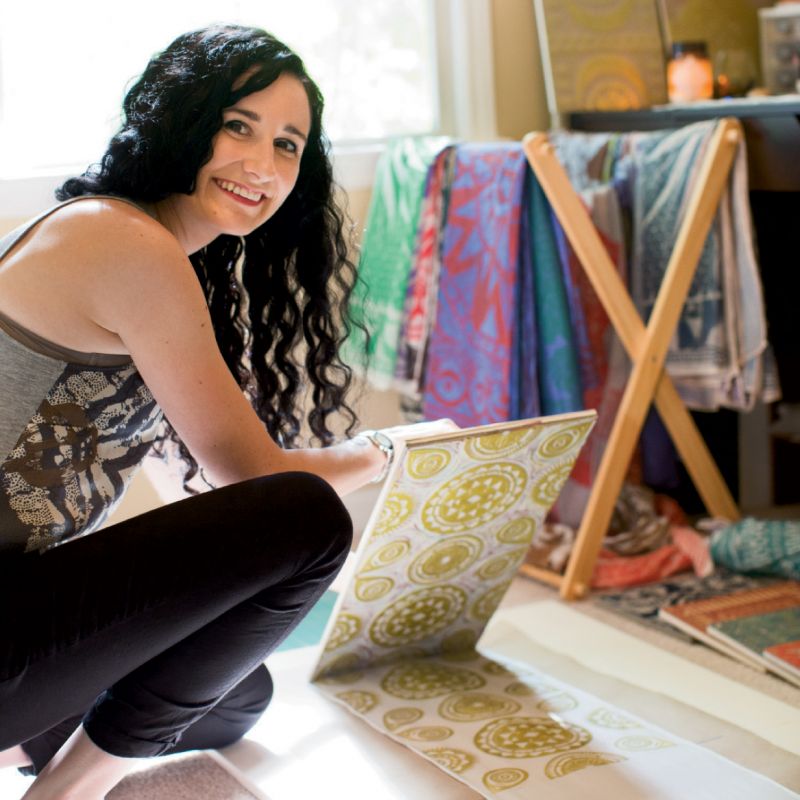 In a light-flooded home studio, the likes of Marco Polo, Squanto, Cleopatra, and Eliza Lucas Pinckney are conjured in silks dyed with shades of magenta, gold, and jade. Elizabeth Calcote, the artist behind two-year-old company SISTERSGRIMM, tells the stories of these historical figures—and goddesses, too—through patterns she block prints on scarves and pocket squares. After stretching the silks tightly across a canvas she built herself, the College of Charleston grad uses the weight of her body to transfer a pattern from a hand-carved linoleum block onto the fabric. The stunning results are sold alongside the handcrafted jewelry at Peyton William and global textiles at ibu, as well as at sistersgrimmdesign.com. Calcote fills us in on her art.

What’s in a name: “SISTERSGRIMM Design” came from my friend Toby. My wife, Adair, and I were walking with him one night when someone asked, ‘‘Who are these ladies?” Off the top of his head, he said, “The Sisters Grimm.” It was fitting because Adair and I try to view life as absurd in its darkest moments and as a fairy tale in its best ones. I adopted it for my company because I tell stories through fabric.

Pattern play: While working at the College of Charleston, I designed a deck of block-printed cards inspired by drag icons like Lady Gaga and Cher. The backs featured a peacock-feather pattern that I had to carve 30 times as identically as possible so that the cards were functional. I found this process to be Zen and mathematical and wanted to continue doing work with patterns.

Læáó pride: It’s important to Adair and me to be very involved with the LGBT community. It’s about visibility—especially for the younger kids who are coming out or thinking about it—showing that you can be gay and get married and have a family in Charleston, South Carolina.

Her playlist: When I’m carving, I go for Nick Drake or classical. But when I’m printing, I like upbeat music: Queen, Lady Gaga, Fleetwood Mac. It’s a bit like dancing, the way I have to kneel on the block and make sure I get every area—it’s a very physical process, which I love.

Current work: I’m doing a second pocket square collection inspired by men who were ingenious explorers of their time, like Ponce de Leon and Zheng He. The first collection included people like Marco Polo. I love that we aren’t sure whether his accounts of traveling are true or whether he was just a fantastic writer who stole everyone’s tales on the Silk Road, so his piece features the guardian of his home city of Venice, a winged lion—part real and part mythical.

Wearable art: I like that I am making something that touches someone; it’s a very intimate exchange that takes place without me ever knowing who’s using the object.

The ibu connection: It’s inspiring to be part of a store that features all female textile artists. Their narrative of finding artists in these remote parts of the world and bringing their work to America encourages me to look outside of the U.S. for designs and to research people I’ve never learned about.

For fun: I love drag culture and going to drag shows. They’re great celebrations of the LGBT community where people can be themselves and dress up and perform.

Ultimate goal: I want to have a block printing atelier with a storefront as well as a workshop where we’d make fabric and work on collaborations with clothing designers, wallpaper for interior designers, and eventually other kinds of housewares. 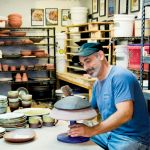 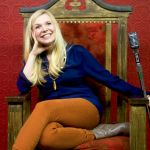