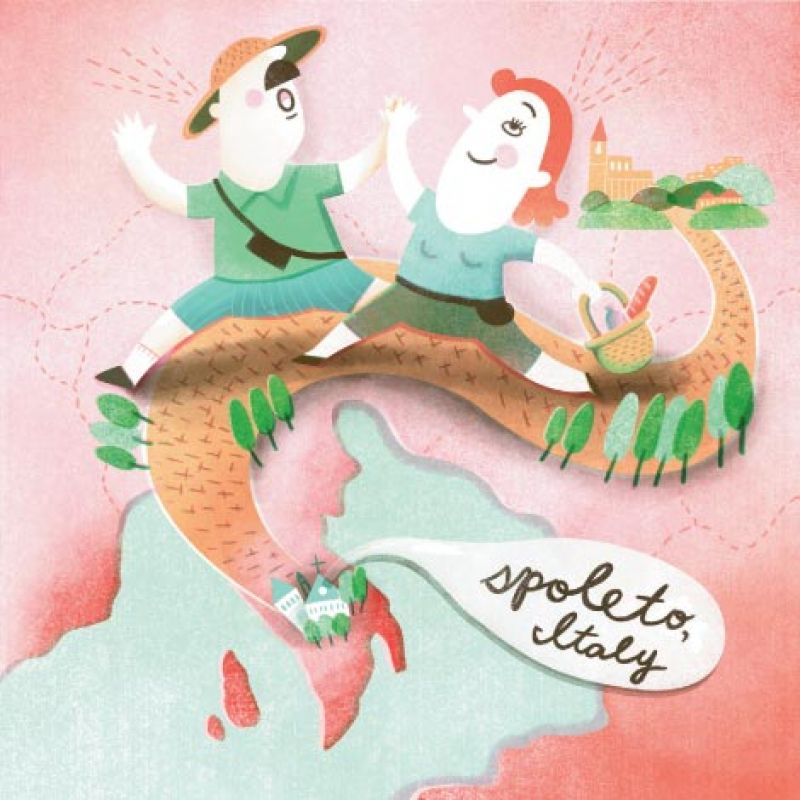 In Spoleto, Italy, they call it the Festival dei Due Mondi (Festival of the Two Worlds). The box office there even has some of the same posters we hang in Charleston. “I’m from ‘the other world,’” I blurt. Glancing up disinterestedly, the ticket seller is decidedly unimpressed by the fact that we have traveled from the other mondi and hiked more than 50 hilly, sweaty miles to get there.

Ten days earlier, my husband, Mark, and I had sat waiting in Foligno, anxiously asking ourselves, “Can you make a plan with a stranger 3,000 miles away via the Internet, reveal your credit card number, and actually expect that person to show up?” Apparently so, because at exactly 2 p.m., Luc, our tour organizer, arrived. “I’m Swiss,” he proclaimed, “I’m always prompt!”

From a hilltop café with the first destination on the horizon, he described our self-guided route along the Olive Grove Trail. The trek would take us through ruralUmbria, along paths lined with olive groves, down ancient cobblestone streets in charming villages, and past Romanesque churches. It sounded exciting, exotic, and... daunting. We quizzed him: “What if we get lost?” “What if we want to quit?” “Are we too old to do this?” As we finished the first of the trip’s many bottles of prosecco, Luc answered our questions, and we mustered the courage to begin.

When we stepped into the olive groves early the next morning, farmers waved and wished us a good journey. A set of arcane directions became our Bible—although they seemed to have been written by someone who was speaking English as a second language, was directionally dyslexic, and didn’t know the true definition of the word path: “After climbing all the steps up to the village of Pale, you reach the Piazza de Castello.… It might sound weird but you must cross it and climb what looks like a path in front of you.” We grumbled: “This rocky, overgrown, dried up streambed? It can’t be!”

Reading further: “As the trail disappears, look sharply up the hill to the left and spot the roof of a pink house. This is your hotel.” We balked: “That little building way up there? There’s no sign!” Mark threatened: “Tell me we’re not going to knock on someone’s door in the middle of nowhere! If that’s not it, I’m going to kill somebody!” Bloodshed almost occurred when a confused woman answered our knock. Fortunately, the guesthouse owner intervened, and we soon cooled off in the much-appreciated swimming pool.

Our next day’s directions warned of “many climbs and a long stretch on asphalt road.” Stone lanes meandered through Roviglieto, Santa Maria in Valle, and other ancient villages. Hot and thirsty, we were surprised to find no stores at all—not even a place to buy a cold drink or sandwich. Locals tended their gardens and livestock and shared the shade in the square where we rested. Since it was Sunday, the echo of church bells reverberated through the valley, the only sound as we walked.

Deep in the forest, clinging to the rocky hillside, the Abbazia di Sassovivo appeared as if from a Grimm fairy tale. Famous for its 14th-century frescoes and chanting monks, this day the abbey was silent and spooky. Maybe the monks were hiding or too hot to sing? Further on, we zigzagged up and down the hillside, catching sight of our next destination: the walled medieval town of Trevi.

In the blazing midday sun, we hit the long asphalt section that led into town. Despite our disheveled appearance, we joined a crowd of nicely dressed families and uniformed policemen enjoying Sunday lunch and delighted in ample servings of pasta with truffles. And we got smart and called the hotel to pick us up. Arriving at Casa Giulia, we reveled in the huge room at the top floor of the sprawling 17th-century estate. We thought this was the height of living until we saw the next destination: Il Castello di Poreta.

Really? we thought. A castle? But was it a good one or the Boris Karloff kind of castle? We left Trevi in the cool of morning, walked for five hours, and arrived at noon as the only guests. The manager soon left us alone—king and queen of our kingdom with a private 16th-century frescoed church and miles of views in every direction. Later that evening, he returned to prepare us a sumptuous meal of stuffed pork, truffled potatoes, homemade bread, and local wine as we enjoyed the starry view from the terrace. Needless to say, it was extremely hard to leave the next day.

“Rough and ready, ready to roll” became our daily mantra. We obstinately put faith in directions such as “Turn right by the red washtub” and often got lost. Villagers smiled in amusement as we trudged by melting in the heat. Two young Italian men joined us one day, practicing their meager English. We proudly told them we had walked 10 days and were finally reaching Spoleto that afternoon, although I’m not sure how this fared in translation.

The following day, safe and exhaustingly exhilarated in Spoleto’s wonderful Hotel La Macchia, we were surprised by a visitor: Luc, who came to host a celebration for us. He and the friendly family who runs the hotel had prepared a minor feast to toast our successful journey and hear our adventures. We felt a tremendous sense of accomplishment, not only for reaching the destination, but also because we never called Luc for help.

Later in the week, crowded into our stone seats in the Teatro Romano, we watched Chip Menotti, the son of Spoleto founder Gian Carlo Menotti, enter the 2,000-year-old amphitheater with his entourage of glitterati. Chatter in several languages surrounded us as the panorama of the Italian sky turned dark and the enrapturing sounds of Andy Garcia’s Cuban band began. This was the moment we had walked for, we Charlestonians at the Festival dei Due Mondi.