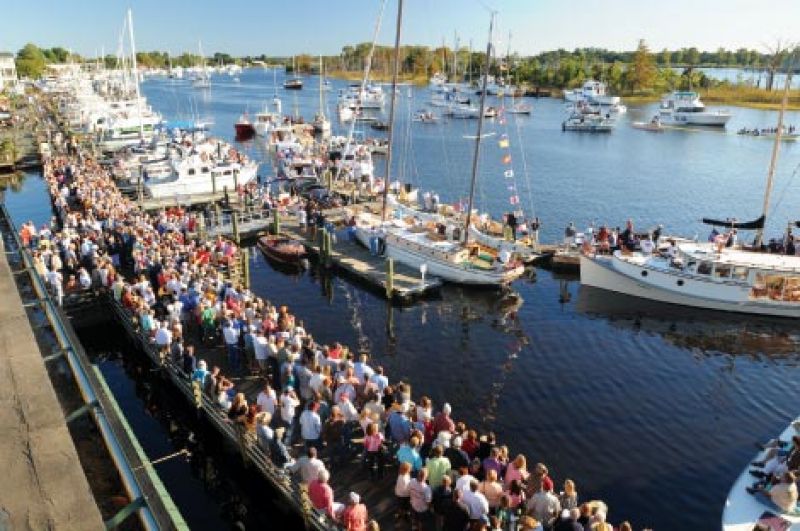 There are certain skills I’ve honed over the years that would come in handy were I a contestant on a survivalist reality show. Fishing, running, and horse riding are on the list, and bow hunting is in my future. But until I moved to Charleston, I hadn’t tackled a biggie: boat building and motorless maneuvering. I’ve now checked off both thanks to the New Charleston Mosquito Fleet (NCMF), who started in 1995 to teach kids from disparate backgrounds how to craft a wooden yawl boat—the kind a sailor would row from ship to shore—and operate it as a team. By the time I showed up in 2002, the crew had evolved (or devolved) into a bunch of water and wooden-boat enthusiasts who just enjoyed getting out on the Ashley. Today, my shoulders are blown out from the sport, but I still join the NCMF to prep for—and even participate in—this or that maritime event. October brings the mother of such occasions: the Georgetown Wooden Boat Show.

All over the Southeast, shipwrights and hobbyists are coaching novices like myself to sand, seal, prime, paint, and otherwise ready boats for the 22nd annual festival. NCMF gigs have been hauled up to Georgetown for years. There, diehards like Rob Dunlap and George Riekerk coax festival-goers into the rowboats and cox them around the harbor, teaching them to man a craft powered by nothing more than themselves, their crewmates, and a little rhythm.

Last year, the NCMF boats looked fabulous, with fresh red sides and rotten spots patched up just so. There were enough of us that I could leave my seat as lead stroke and wander about the big doings on Front Street. While Dan the knot-tying man held a “knot-off,” kids made boat models, and crowds wove in and out of classic wooden vessels—everything from kayaks and canoes to Chris-Crafts. As always, the main draw was the boat building competition. Under a big top, teams of two battled for four hours to assemble seaworthy skiffs from scratch. Teen heartthrob types raced against old codgers, slow and steady turtles hammered away alongside speedy rabbits. With bystanders heckling and cheering, it had the air of a small-town fall festival, which, of course, it was.

Just before 4 p.m., I hustled into one of the NCMF gigs to watch the culmination of the building competition—the river race. We scooted under the police-tape race line that ran from one boat to another and anchored alongside other bystander boats. As we settled in to watch, teams carrying newborn boats forced their way through a thick dockside crowd. They plunked their babies into the water, and the race was on. Each person had to row out to the police tape and back, trade off oars relay-style, and repeat.

The hollering started as soon as the first person in team 11 took off lightening-quick and just as quickly took on water. A junior heartthrob, he rowed like he could will the skiff afloat based on faith alone. The result? A wild crowd, frantic pulling on oars, and in moments, a rower-turned-swimmer. Then came the next casualty. Team 10 made a fine showing on the first leg, but when their last man lost an oar, he jumped up like he was on a stand-up paddleboard and tried to get the rudderless vessel to move in a straight line. A Charlie Chaplin soundtrack could have tinkled out over the scene, him struggling, the crowd going hysterical, and codgers whizzing past. When he lost—but won the crowd—everyone cheered, and the day’s battle was done.

The NCMF rowed to the public landing and loaded the gigs back onto the trailers. I walked to my car, past the cottages of the charming old town’s waterfront neighborhood. Dreamy golden fall light slipped through the oaks as locals meandered home. And me? I puttered along thinking I might add knot-tying to my survivalist list.