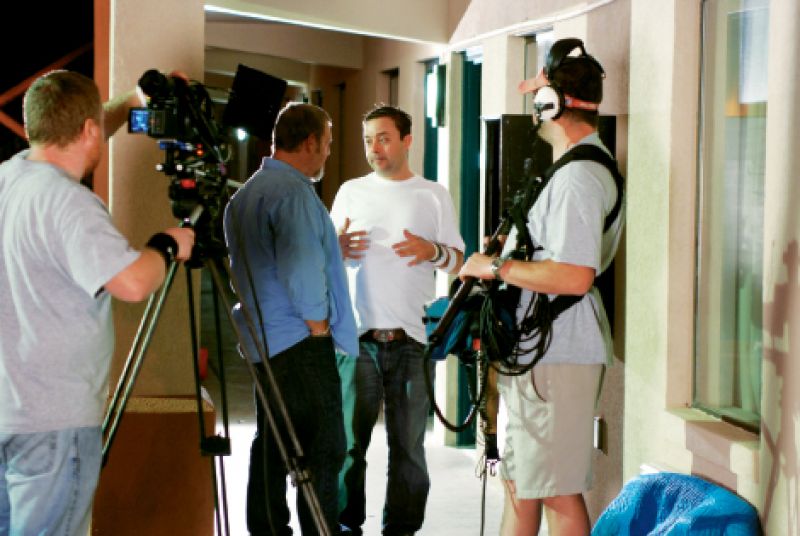 The Lowcountry plays a fickle mistress to the movie business. Hollywood gallops into town, relishing Charleston’s beauty and charm (The Notebook in 2004, The Patriot in 2000), then scampers off without proper courtship. “This is like one great big movie set,” says local filmmaker Nick Smith, recalling the sentiments of a big-time producer during his visit here. “You can shoot a period film, a foreign city, a present-day story—all just downtown.”

With the exception of the Army Wives series, though, no permanent, major film productions exist in Charleston. But a determined handful of regional moviemakers are working to change that and put our city on Hollywood’s permanent radar. Smith’s Clandestine Films is currently in post-production of two full-length movies: the action/suspense-fueled Cold Soldiers and slasher flick Eight Graves. Brad Jayne, creative director of Creative Forge Productions, soon begins casting the feature-length Warrior, a story of three drugged and horny Lowcountry teens fleeing up the coast after robbing a rural juke joint. The plot follows the main character’s imagination and search for strength and courage.

“Part of our strategy is not just to make a movie, but to make a movie we can market,” says Jayne, who begins the project with a tentative budget of $1.3 million. Guitarist Mark Bryan signed on as music supervisor, former child actor Robert Hy Gorman will produce, and Creative Forge is currently in discussions with some “notable actors” for the lead roles. “We need to have a project that originates here make a splash to show that Charleston is a viable production entity,” says Jayne in response to the shoot-and-leave mentality of past Hollywood projects.

He was the first recipient of the S.C. Film Commission’s annual Production Fund, a $100,000 grant awarded to two to three filmmakers who are partnering with South Carolina college film programs. John Barnhardt, president of Carolina Film Alliance and an instructor at Trident Tech, believes the impact of the city’s groundswell of independent films has finally hit. “The feeling is that Austin, Texas, vibe before the industry blew up there,” says Barnhardt. “We’re getting some legitimate independent filmmakers doing sophisticated projects that create a good foundation for bigger movies to come here.”

South Carolina does offer cash rebates (10 to 20 percent on wages up to $1 million and 30 percent on supply costs) to filmmakers shooting here. But while producers are attracted to the 30-day turnaround on the rebate, our incentives aren’t as tempting as those offered elsewhere. (A year ago, Georgia upped its to 30 percent with no cap; North Carolina adopts a 25 percent tax credit in 2010; and Alabama and Louisiana give a whopping 35 percent.) “There are more than 40 states and 15 countries offering increasingly aggressive incentives; the Southeast is arguably the most competitive region in the U.S.,” says state film commissioner Jeff Monks. “The legislature is constantly trying to balance what’s competitive and what’s financially irresponsible.”

The commission is working to develop indigenous cinematographers, cast, and crew with seminars and project grants. The Charleston International Film Festival, in its third year next April, is also bringing attention to the Lowcountry as a resource of local talent and a filming destination. It’s joined in March by the Charleston Film Festival, an inaugural event hosted by the Terrace Theater to promote our homegrown filmmakers. Among the films is Barnhardt’s The Man Who Shot God, a post-apocalyptic psycho thriller born from T.S. Eliot’s “The Hollow Men.” The project required 30 people sacrificing nine months without pay. “It’s just brutal,” says Barnhardt.

He hopes the payoff comes when our growing recognition convinces Hollywood that a capable crew base with on-set experience exists here. “But something needs to break to get the nation to realize.”