Palmetto Flag
June 2016
WRITER:
Suzannah Smith Miles
As a whole, South Carolinians (and plenty of vacationers who fall in love with this place) adore our state flag. We wear renderings of it on clothing and accessories, stick it to car bumpers, and incorporate it into company logos. For some, it’s merely about that pretty palmetto tree and its crescent ”moon,” but many love it for its history. They know that in 1775, Colonel (later General) William Moultrie designed a flag for his American patriots consisting of a white crescent on a solid blue background—the color of his men’s uniforms. That banner was waving over tiny Fort Sullivan on June 28, 1776, when Moultrie’s troops defeated the British at the Battle of Sullivan’s Island, with a good deal of help from the native palmettos. In honor of Carolina Day, here’s more about our fascinating flag 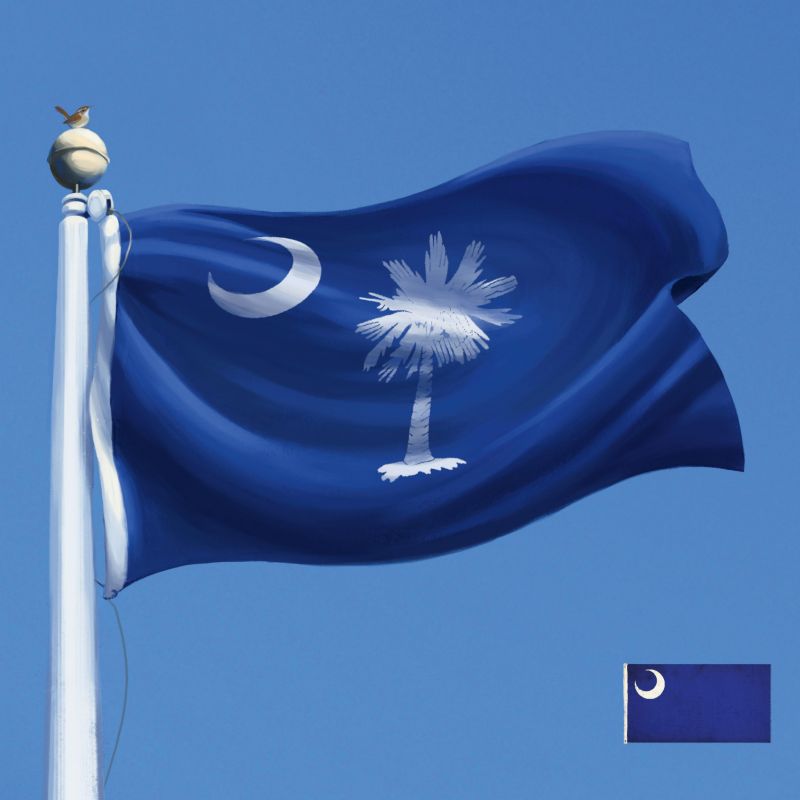 Bark with Bite
The palmetto-log fortification Moultrie’s men built on Sullivan’s Island was only half finished when the British attacked. Because of the palmetto’s fibrous nature, the enemy’s cannonballs didn’t explode. Instead, they soaked into the logs’ spongy material, leaving the fort with minimal damage. Immediately after, the palmetto tree became a symbol of victory for the Americans; it’s believed the word ”liberty” may have appeared on versions of Moultrie’s flag that flew later in the Revolution.

Date to remember
This June 28 marks the 240th anniversary of the battle at Fort Sullivan. The date has been celebrated in Charleston as ”Carolina Day” since 1777, with a downtown commemoration, living history events at Fort Moultrie, and other activities typically taking place during the days surrounding it.

Palmetto Pride
In 1861, South Carolina needed to create its own ”national” flag after seceding from the Union, and the General Assembly elected to use Moultrie’s banner, with the addition of a palmetto tree in the center. That design has been our state flag since.

Serious Business
According to South Carolina law, it is a misdemeanor to desecrate or mutilate a state flag—say, by writing a word or painting a design upon it—no matter where it’s displayed. The penalty? A fine of up to $100, imprisonment of up to 30 days, or both.

Moonstruck
The crescent at the upper left of the palmetto flag wasn’t originally representative of a half moon. It was the insignia of Moultrie’s troops, likely an adaptation of a military gorget. In ages past, this was a crescent-shaped armor plate that protected the throat and upper chest in battle. By the Revolutionary War, the gorget had evolved into a stylized ornamental badge made of silver and worn by officers or sewn onto uniforms and hats.