Paddle Pup
August 2014
WRITER:
Stratton Lawrence
PHOTOGRAPHER:
Leigh Webber
Cozmo's always up for adventures, or a nap, or both 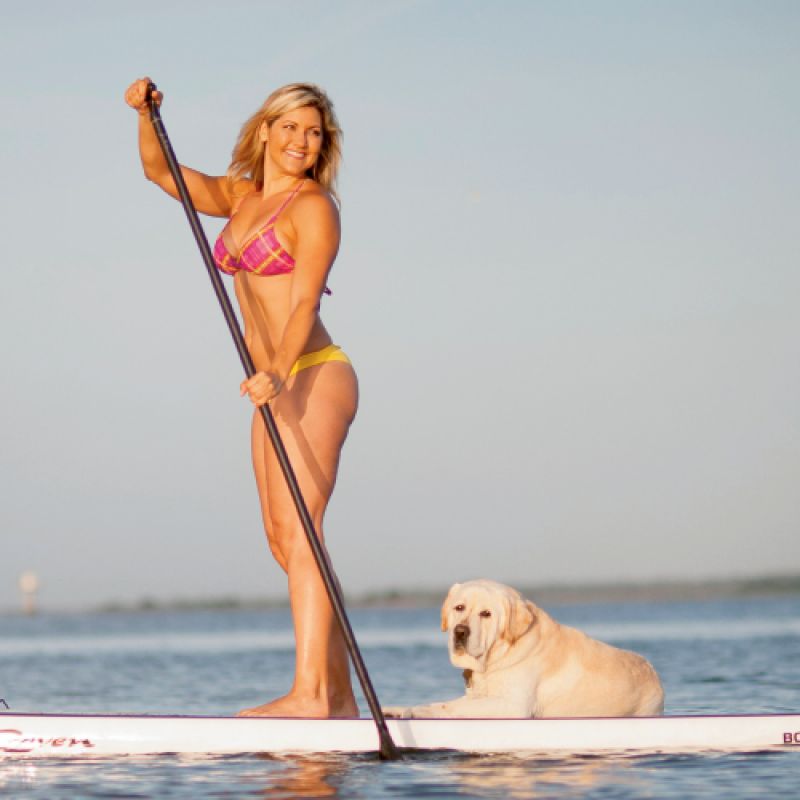 Local fitness trainer Stephanie Keenan gets lots of looks as she paddles Shem Creek, and that’s likely due both to her impressive physique and the pretty yellow English Lab calmly lying on the back of her paddleboard. “He’s always been super calm,” says Keenan of Cozmo, who she describes as both “Eeyore-like” and “a big, super-chill toasted marshmallow.”

Keenan found Cozmo, now eight years old, as a puppy in 2006 through a breeder on Wadmalaw Island. At the time, she had left her post as a nuclear engineer with the U.S. Navy and gone into private defense contracting. Cozmo joined her on a move to Philadelphia and then back in 2013, a year after the launch of Keenan’s online fitness training program, SK FitLife.

Maintaining a balanced diet is integral to Keenan’s programs, and that carries over to Cozmo’s daily routine, as well. His favorite treats are carrots and frozen beans (“Raw veggies are less expensive than processed treats,” Keenan adds), and she supplements his “joint-support” food with a tablespoon of unrefined coconut oil each week.

Perhaps most importantly, Cozmo heads out with Keenan three or four times a week to explore Charleston’s beaches and waterways on their paddleboard. When Keenan sets the board on the dock, Cozmo hops on top, ready to go, before it’s even in the water.

His other favorite pastimes? Playing with puppies, rolling in mud puddles, and joining Mom on road trips. “He’s my mascot in all of my workout videos,” adds Keenan. “Cozmo is definitely my copilot for life.”