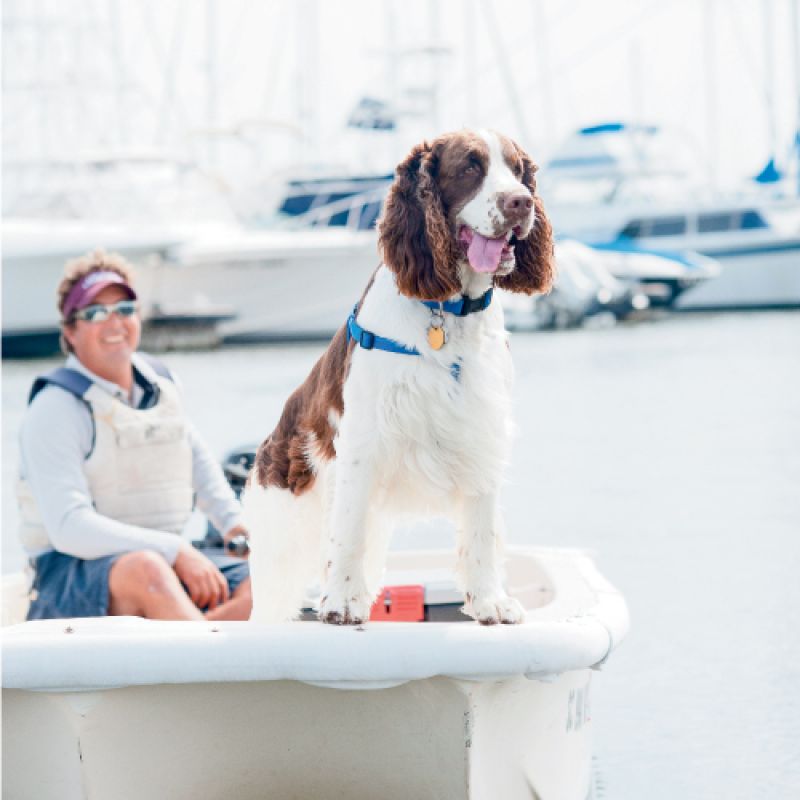 When College of Charleston dockmaster Ned Goss headed to the Southeastern Wildlife Expo’s annual oyster roast in 2012, he never dreamed that he’d become the type of person who texts their friends picture after picture of his dog, accompanied by captions “spoken” by said animal. Indeed, the tendency toward anthropomorphism snuck right up on Goss, but considering that his constant companion is a shaggy, entirely lovable English springer spaniel, it’s hard to fault him for it.

At the aforementioned oyster roast, Zephyr was one of three spaniel puppies up for auction to benefit local wetland restoration. Goss’ will gave way to reflex, and he took home his new pal for a cool $700.

Now nearly three years old, Zephyr (named after the Greek god for the west wind) rivals his pop in his love for the water, joining Goss on his boat commute from James Island to his job at Charleston Harbor Resort & Marina at Patriots Point, where he teaches and coaches student sailors. Goss—a former member of the U.S. Sailing Team who also holds eight National and North American championship victories as a competitive sailor—brings his 60-pound companion along on daily sails, and Zephyr is a popular presence with students and neighbors at the marina.

The one boat Zephyr can’t ride along on? Goss’ paper-light Mach2 Moth, aboard which he set a world speed record in Charleston Harbor on May 10—35.9 knots sustained for 10 seconds! When Goss sails the Moth, Zephyr watches every move from the bow of a nearby powerboat, waiting for the moment they’re reunited.

“Zephyr loves being on the water,” says Goss. “When I get in the skiff, he runs like the wind so he doesn’t miss the boat.”