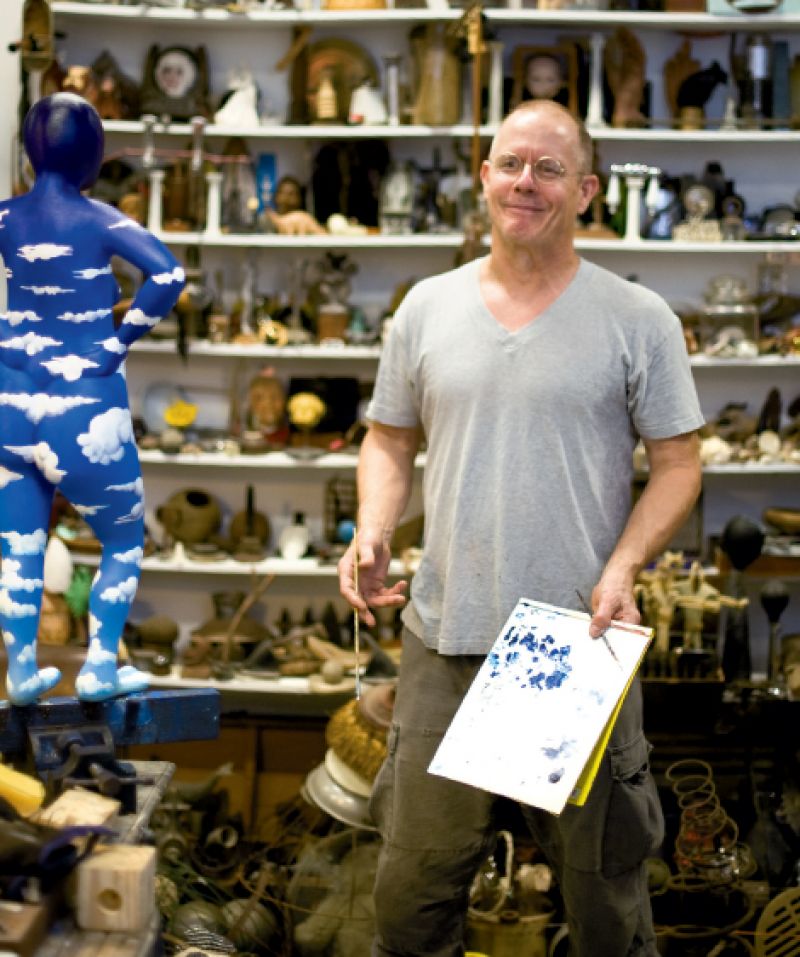 Herb Parker’s organic structures have sprouted up all over the world, from beneath a waterfall in Japan to, most recently, Artpark on the Niagara River in New York. Composed of natural materials like bamboo, clay, and moss, the structures aren’t really built to last, yet they leave a lasting impression on viewers who often walk away with an altered perception of the environment—at least that’s Parker’s goal. But the College of Charleston professor also has a separate body of work that he creates in his Holy City studio. Viewers can see these found-object sculptures in a Halsey Institute of Contemporary Art exhibit featuring a recreated version of Parker’s studio (as well as that of artist Joseph Burwell), from August 23-October 5.

Inside the artist's studio: My studio practice is very different from my nature-based work. This body of work is object-oriented, often humorous, and employs a variety of materials.
dWhat it's all about: The ideas and issues I’ve been exploring for the past decade are concerned with interpersonal relationships, particularly male/female/family interactions and the expectations and antagonisms inherent in those affiliations. This work more accurately reflects the excitement and frustrations of day-to-day existence than the more ethereal environmental constructions.

Talking heads: The studio work I have been creating over the last few months is about dialogue, in a sense. Two large heads rest on towers with rockers. A chain is connected to the heads. A viewer can pull the chain and the figures appear to communicate.

On the exhibit: The space within the Halsey will be a good indication of what my studio looks like and perhaps give some insight into what stimuli drive the work. I like to be surrounded by interesting shapes, textures, and objects, and the juxtaposition of these components often suggests an interesting perspective.

Dumpster diving: I’ve always been a pack rat. I can’t pass a dumpster without peeking in.

Ultimate discovery: In the late ’80s, I was working as a day laborer tearing down an old warehouse with a sledgehammer. I punched a hole through a wall, looked in, and saw hundreds of figures of adults and children hanging from the roof. It was a surreal moment, beautiful and eerie. They were old plaster mannequins from the ’40s or ’50s. I saved a truckload, but the others were destroyed with the building.

His latest installation:  I created Artpark Dialogue as part of Artpark’s “40 For 40: Alumni Artists 40th Anniversary Celebration.” A thatched-roof building with stone walls, it suggests a Neolithic structure with a contemporary Asian interior composed of an open-air courtyard with stone seating. It’s a quiet place to contemplate or have a conversation. It is a dialogue with history, culture, and community.