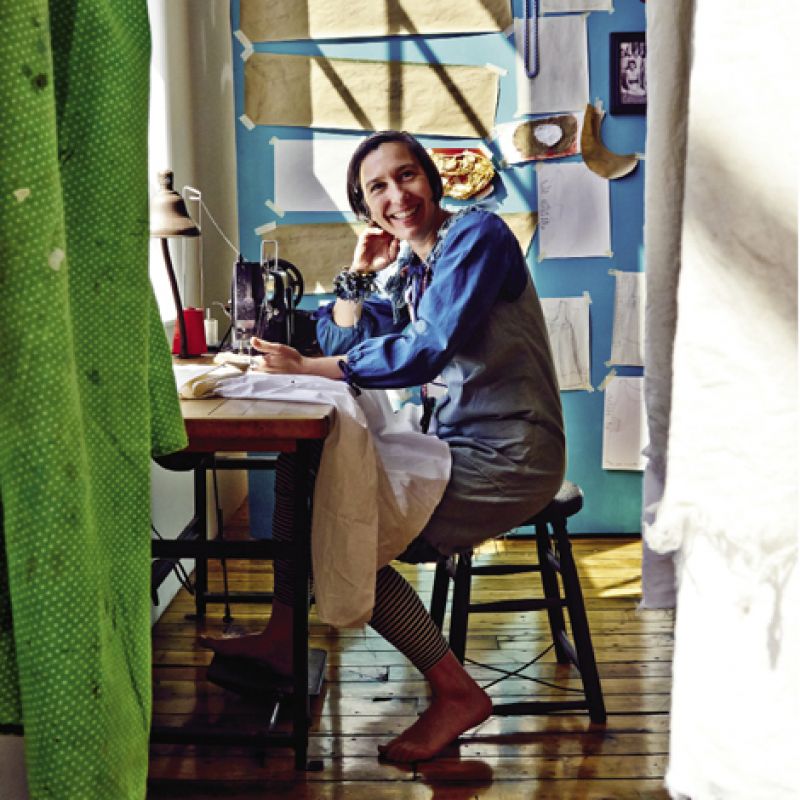 Wearing a white canvas dress with tomato-red dots, an indigo-dyed scarf knotted on her head, black-and-white striped leggings, and pointed red slippers with sequins sewn on top, LEIGH MAGAR is going about an ordinary day—for her. We’re sitting at a vintage ’50s enamel-topped kitchen table on the single house porch of her circa-1825 Cannon Street studio. Her cropped, dark hair is cut in a ’20s movie starlet’s blunt style, and she recalls a Mae West quote, “It’s better to be looked over than overlooked.” In the day’s last bit of sun, the conversation turns to the 1980s art and music scene of Athens, Georgia.

If you know Magar, if you’ve ever seen her, you immediately realize her style blurs the decades. The founder of Magar Hatworks has always been difficult to pin to a specific time or era, sometimes even to a century. But what’s definite is that she’s always wearing—and crafting—something new and remarkable. Lately, the artful designer’s focus is frocks. Her Madame Magar line, which launched in 2012, features one-of-a-kind cotton dresses; accessories (including hats); and other sculptural, art-fashion pieces. Through early May, her 2014 spring/summer collection—and its slow-fashion process—is debuting in the state capital in a refurbished building of 20th-century textile manufacturer Olympia Mill.

UNRAVELED
An historic, brick mill building on Columbia’s Whaley Street, within earshot of the railroad tracks, is where we soon meet again. Upstairs, in a room lined with tall, steel-frame windows, frocks of cotton dyed in water from the Congaree River, rust, and indigo float on hooks and hangers above Magar, who’s dressed this day in layers of her own indigo-dyed dresses made with purposefully unfinished hems. “I’m tired of perfect-land,” she says, when I ask about the frayed edges. “I’m obsessed with dishevelment—my first dresses were inspired by unraveling at the seams.”

Magar is hatless and padding about barefoot on the wood floors of the airy 2,500-foot space. She’s installed her vintage Italian Necchi sewing machine by a window in the working studio, along with a dye station and a “dress shop” that includes a wall of vintage mirrors and several dress stands borrowed from Read Brothers on King Street. Her hats—for which she’s gained national acclaim—are here, too, hung on her collection of wooden hat forms and suspended on long, wooden spools salvaged from now-closed manufacturers, similar to the Olympia Mill, which was in operation from 1899 to 1996.

Since opening here in 2008, the 701 Center for Contemporary Art has brought in artists and their works through exhibits, residencies, and educational programming. Executive director Sheldon Paschal says Magar’s show represents some firsts for the often thought-provoking gallery: “We have never had a milliner, and we’ve never had someone debut a fashion collection. Leigh is not just showing but working as an artist and bringing a beautiful dichotomy into the gallery—wild, feathery hats; work dresses; and her collection of hundreds of hat forms.”

Magar is the resident artist for several months, a gig that includes the use of a live-in loft studio just across the hall from the gallery. She’s spilling over with enthusiasm and energy for this exhibit that’s small-batch, sculptural, painterly (if there are dots, she hand-painted them), and literally scrappy. She’s using end pieces and leftover cotton and cheesecloth for collars, neck or head wraps, embellishments, and even decorative coverings for the wire hangers on which the clothes are hung. “The design is as slow as possible,” she says. “It comes from my heart, and I’m showing the drawings, sketches, swatches, and dyeing—things people don’t often bring out for others to see.”

RUST, MUD, & HISTORY
Until this opportunity at the 701 Center for Contemporary Art, Magar had not been to the brick buildings of the mill on Whaley Street. Yet she felt strong personal connections from her very first visit. Growing up in Spartanburg, Magar remembers her grandmother and great aunt coming home ticked with lint from working in the cotton textile mills once so commonly found in South Carolina.

In the environs of the gallery building—originally the mill’s community center—Magar began to explore and absorb some of the millworkers’ experiences. She couldn’t stop looking at an early 20th-century photo of the “Spinning Department,” a group of young women in plain cotton dresses, and her first sketches and dresses in the collection are inspired by those simple designs. Many dresses are named for women pictured in the images or listed in the log of mill workers, including the “Theodosia,” “Lula,” and “Miss Mamie Boozer” (an Olympia Mill Village school principal). Magar also wandered the banks of the nearby Congaree River and gathered its water with its natural orange cast and sparkling mica. The muddy water would become a dye for the muslin of the frocks.

When she first began to visit the Whaley Street studio, Magar noticed the sound of trains that frequently chug across this part of downtown Columbia. The mill workers must have heard this too, she realized. On a visit to the tracks, she found bent and rusted rail spikes and other scrap metal and brought those pieces to her dyeing vat, first winding each tightly in fabric. When unwound, the fabric is tracked with lines and color from the rust. All of this is simple and basic, she says, like the mill village life itself.

That had resonance for Magar, but she didn’t know for a long time what her sandwich would be. A few years ago, she decided to begin a daily practice of meditation and eventually had a revelation. While meditating one day, she says that she suddenly and vividly saw endless blooms of white lotus flowers bursting upwards from her chest to the sky. Ever since, she’s been pursuing her dream of dressmaking. Some might call such an impulse a crisis, Magar admits. “But I call it a blossoming,” she says. “You’ve got to do what you love—it’s got to come out in some form. Madame Magar is what I really want.”

As for the exotic lotus blossoms? I think of those again as I watch Magar at work in the airy gallery that’s strung with dozens of floating frocks. In this space, it’s not difficult to visualize a white profusion rising from the artist to the rafters—except this time it’s not flowers, but rather limitless tufts of fat, billowy cotton.