Looking Up
WRITER:
Melissa Bigner
PHOTOGRAPHER:
Ruta Elvikyte
A novice climber reawakens her "Spidey self" for an urban bouldering adventure 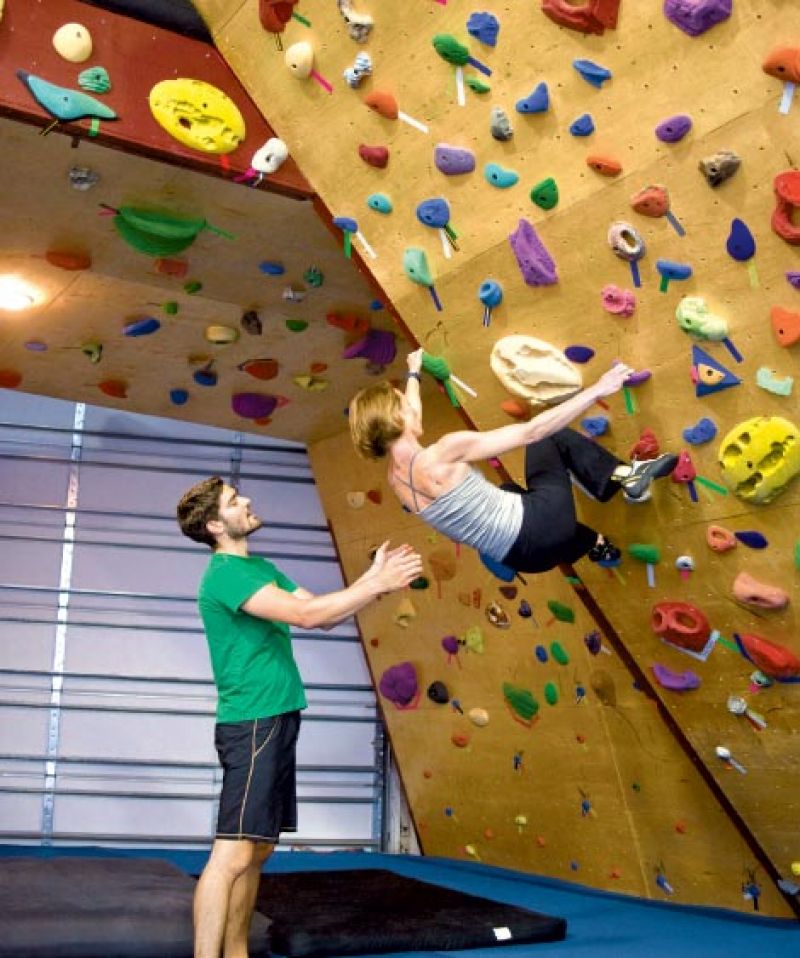 When I was little, I read a SpiderMan comic in which he zips up the side of a building and looks out at the reader while the bad guys hunt for him below. A few frames later, Spidey says, “People always look everywhere, but they hardly ever look up.” Aha! Brilliant evasive survival move, sir.

I’ve thought a lot about that tactic through the years. Living, however, for most of my life in suburban rolling hill country and for the past decade-plus in the flats of the Lowcountry, climbing’s tough to come by since I’m not a parkour type and like to stay on the safe side of the Ravenel Bridge (and law).

But then I saw a sign. No, really, a sign painted across the exterior of a cluster of warehouse buildings at the end of Race Street at King a few blocks north of The Crosstown. The logo, a silhouette of a climber hanging off a crescent moon, beckoned to my long-slumbering Spidey self.

Coastal Climbing just opened in June, and, as owners Kensie Whitfield and Jeanna Crockett explained, it’s a bouldering studio. The difference between bouldering and climbing? Bouldering’s done without harnesses and ropes; is an indoor sport where heights don’t go much more than 12 feet; and is about strategy, a series of short moves, and finesse. In bouldering, the floors are foamy, extra crash pads await you below, spotting buddies have your back, and the walls rise and then tend to angle back your way. The idea is to follow routes based on your level of ability and eventually work your way across the walls. In addition to the bouldering area, this studio—designed by architect Kevan Hoertdoerfer—includes a workout area with cycles, stair climbers, and weights as well as a loft with wi-fi for members.

In giving bouldering a stab myself, I missed my scrawny frame from comic book days. I was supposed to focus the hold on my legs, but felt that was asking a lot of them; some upper body strength would’ve helped. But it was fun nonetheless. As Kensie spotted me, I tried to follow one course (called a “problem” in boulder speak), but as my foot inched over to an off-course hold, he said, “That’s not part of the problem.”

“Yeah,” I retorted, “but maybe it’s part of the solution.” Of course, I immediately fell on my butt—again.

In the short time I gave it a go, I worked up a sweat matched only by respect I had for the other folks on the walls. They were amazing—don’t get me started on “The Cave,” where the holds span the ceiling. Spidey would be proud, and for anyone looking for an inside adventure during the dog days, it doesn’t get much cooler.