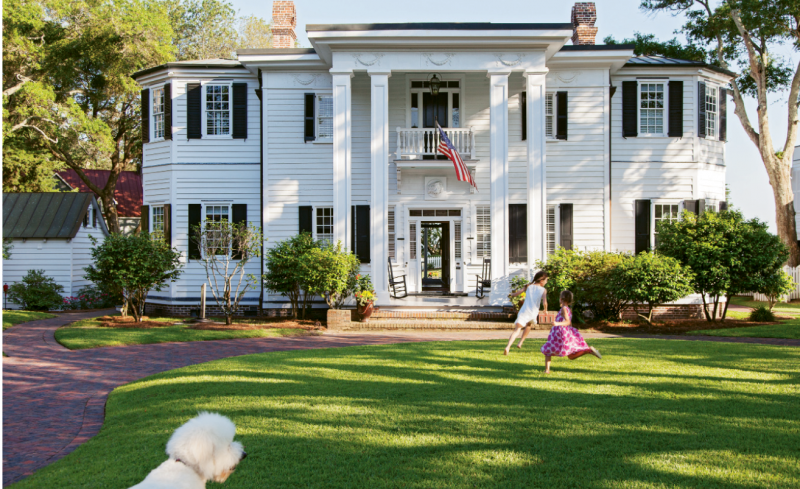 Three times a day, groups of tourists on Segways come rolling through the oak-lined Old Village, pausing in front of the historical Hibben House. As they take in the circa-1755 manse’s grand cornice- and column-adorned façade, their guide dispenses snippets of the home’s past. And there’s certainly no shortage of history to draw from. The oldest surviving structure in Mount Pleasant, it has housed luminaries such as General William Moultrie, who was held captive here by the British during the Revolutionary War, and indigo pioneer Eliza Lucas Pinckney, who moved to the bluff overlooking Charleston Harbor in 1759, seeking fresh air for her ailing husband. (The abode may have once been considered a health retreat.) Often, tour-goers also catch glimpses of modern life in action: current residents Shannon Brown Wood and David Wood unloading their groceries, perhaps, or their daughters—Madelyn, age 10, and Avery, age six—playing with their goldendoodle, Scipio, on the lawn.

For her part, Shannon smiles and waves at the sightseers. She doesn’t mind their attentions—probably because she totally gets the home’s appeal. In fact, the residence has captivated her imagination since the sixth grade, when her family moved in next door. Back then, Shannon and her siblings struck up a friendship with their elderly neighbor, Julia McIver, whose clan occupied the Hibben House for almost a century. “She would wave us over and share terrific stories about the home, which we loved,” Shannon says.

An avid gardener, McIver tended to camellia bushes that dot the yard to this day, while reminiscing about Daddy Scipio, the home’s former grounds keeper (the Woods’ family pet is named in his honor), and afternoons spent playing along the bluff with her sister. “Miss Julie,” as the children called her, also schooled them on the abode’s famous former occupants and invited them inside the space—which Shannon recalls as dark and museum-like—to examine her collection of relics from the past, including a Civil War-era cannonball found on the grounds and framed copies of Moultrie’s ancient wartime correspondence. “Miss Julie wasn’t concerned about the house being decorated,” Shannon notes. “She was more about being the keeper of history.”

But today, with the happy bustle of family life unfolding in the foreground, the nearly 3,900-square-foot place feels nothing like a museum. In fact, it’s usually bursting with action. Madelyn and Avery are born performers and total hams; any given afternoon might find them perched at the piano in the music room, belting out tunes from Annie and Les Miserables. Meanwhile, Shannon’s likely to be in her adjoining art studio putting brush to canvas while David hangs out in the backyard, chipping and putting on a mini golf course of his own design. Amidst all the hubbub, this old house feels alive. And though it does have handsome historical bones (think dentil mouldings, solid cypress wainscoting, and Adamesque fireplace surrounds), those elements are balanced by bright, coastal décor and lots of contemporary art—a look that suits the family’s 21st-century lifestyle. “It’s a formal house, but we like that it feels lived-in, not too matchy or perfect,” Shannon notes.

This inspired and totally relaxed approach to life in a landmark jives with Shannon and David’s creative bent. A longtime painter, Shannon sells her abstract landscapes—inspired in part by the breathtaking views offered by her own backyard—through the Charleston Artist Collective, a web-based gallery that donates a portion of profits to area charities; David is creative director and partner at Blue Ion, a digital marketing agency with a roster of clients ranging from the Gaillard Center to Porter-Gaud School. It’s only fitting that when the artsy duo moved into the house last April, they bucked the urge to furnish it with period pieces and found a way to imbue it with a style that’s all their own. But they almost never moved in at all. When Shannon got the opportunity to buy, she initially declined, worried the house was too stuffy. Her folks had purchased the manse when it hit the market in 2012, with the goal of reselling to a preservation-minded buyer—preferably one of their own four children. At the time, she and David were happily installed in a new build in the I’On community with no plans to leave. But the idea slowly began to take root. She pictured Madelyn and Avery doing the things she’d loved doing as a kid: biking to Pitt Street Pharmacy for candy and ice cream, crabbing and fishing along her parents’ dock. Plus, she and David both felt compelled to preserve their unique tie to the home’s history. “I feel this responsibility to pass Miss Julie’s stories on, to make sure the past isn’t lost,” she explains. Add to that the bonus of her parents living next door—“the babysitting is definitely a perk!” Shannon laughs—and they were sold.

With the deed signed and no major renovations needed (previous owners had taken care of necessary updates and building out two additions that flank the original structure), the couple turned their attention to banishing any fustiness. They accomplished this in part by doing away with the heavy crystal chandeliers that hung throughout. “They were everywhere—in the hallways, in the living room, in the stairwell,” Shannon says. “They weren’t old or original to the home, and they just felt over-the-top.”

She enlisted area interior designer Amee Leland to help her source new, more modern fixtures, such as the Sputnik-inspired number in the music room and the sculptural brass-and-glass chandelier in the living area. “Before, with all that crystal, everything was so heavy. You didn’t even want to go into a room for fear you might break something,” she recalls. “Now the fixtures add something unexpected, mixing traditional with modern.” Aside from the lighting plan, Shannon and David handled the décor themselves, sourcing a mix of antiques and more streamlined, contemporary pieces.

Rather than sticking to a predetermined aesthetic, they simply bought what appealed to them, be it the sleek iron-and-marble table in the sun-room or the more ornate vintage sideboard in the living room. And throughout, a neutral palette provides a gallery-like background for their art collection, featuring works by local painters and fellow Collective members Lynne Hamontree, Slava Roubonov, and Ann Keane, as well as Shannon’s pieces. “For me, the art is the most important thing in the house,” Shannon says. “Original art just gives such rich texture and interest.”

The property’s crown jewel is its sprawling waterfront backyard. Here, David put his design skills to work, dreaming up a landscape starring the aforementioned putting green, an in-ground trampoline for the girls, and a bluff-top fire pit that provides the perfect platform for enjoying the lot’s sweeping vistas. Unsurprisingly, this oasis is where the family spends most of their leisure time. “No matter the season, the outdoor space is where you’ll find us,” David notes. “It’s difficult to stay inside for long—the rocking chairs and harbor views are always relaxing.”

Out here, Madelyn and Avery have free reign to run back and forth between their grandparents’ backyard, where they can swim in the pool, and their own, which provides ample room to play. “It’s a great place for them to spend all of their energy. The yard is always littered with badminton and tennis racquets, footballs and soccer balls, dolls, and dog toys,” David adds.

Guests naturally gravitate outdoors, too, and the yard has become the social hub for Shannon’s extended family. Her siblings and their broods all live in Mount Pleasant or West Ashley, and on many weekends she and David host some sort of family soiree, be it a birthday dinner or graduation party.

True to form, their backyard entertaining creates a much more casual tableau than what the Segway riders see up front—and that’s just the way Shannon likes it. They’ll cue up some reggae tunes, serve easy-to-prep dishes like Frogmore stew and barbecue, and enlist visitors to bring the sides, potluck style. With the scent of pluff mud hanging in the air, the kids might pick their way down the bluff to play along the waterfront, just as Julia McIver and her sister once did. It makes Shannon smile to see them making their own memories in the house. “My girls are good storytellers,” she says. “I have no doubt they’ll continue to share the history of this place, and I’d love for one or both of them to have the house one day. We’ll just have to wait and see!” 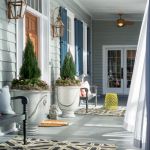 After covering homes and gardens for nearly half a century, we’ve seen trends come and go, but one thing remains true: any time you’re invited into a Charleston residence, the host offers a look around just as surely as she offers iced tea. 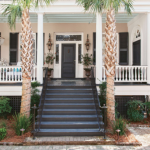