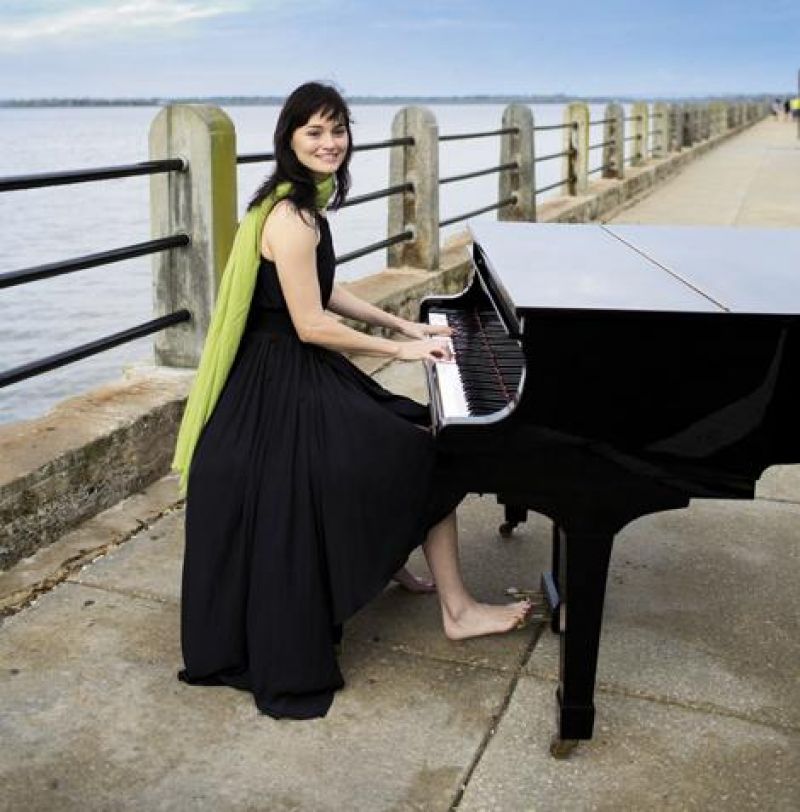 If she had to pick a favorite from the UNED!TED concerts she’s produced at the Charleston Library Society (CLS), Laura Ball says she’d choose “Beatles, Bach, and Beer.” For this blend of Baroque and British Invasion, five musicians rocked the stacks of the 99-year-old building before the crowd toasted with local brews. Imagining the scene, one can’t help but wonder what CLS’s 19 founders, who started the society in 1748, would have thought had they come upon their club and heard “Cello Suite No. 1” burst into “A Hard Day’s Night.”

“I think they’d love it,” says CLS executive director Anne Cleveland. Which is exactly why she hired one of the city’s most difficult-to-describe talents to create the wildly popular series. “When the Society was founded, it was the place to be for people to stay abreast of science, culture, art, and technology. With UNED!TED, Laura has helped re-energize that mission.”

The genre-bending classically trained pianist got her start at age three taking piano lessons at Fox Studios; by eight she was playing for church choirs. “I’ve probably played in every church in the Lowcountry,” says the 32-year-old, who is the director of music at Holy Spirit Catholic Church on John’s Island. While her musical trajectory seemed obvious, life took a random turn at age 12 when the budding beauty was discovered by a modeling agency. “Suddenly I was apprenticing with New York agencies and ended up in Europe,” she recalls. By 17, her agent wanted her to move to Paris to work in the industry full-time.

“They told me I could keep studying piano at the Conservatoire de Paris, but modeling and music are both full-time jobs,” she says. Ball chose her art and enrolled at D.C.’s Catholic University of America for classical training. There, she had opportunities to play with jazz groups and compose for dance troupes. She even considered becoming a Broadway accompanist, but her strict Russian professor put her foot down. “That’s a huge no-no in the classic piano world,” Ball says. Frustrated and yearning for new artistic horizons, Ball transferred to the College of Charleston.

“CofC gave me room to explore,” she says. Ball performed in the Summer Shakespeare Program for three years, studied music theater with Maida Lipkin and voice with Margaret Kelly Cook, and even picked up a second degree in Spanish. Upon graduation, she jumped into performing full-time. Local arts patrons Marion and Wayland Cato offered Ball her first gig playing at a cocktail party and helped expand her cultural circle in town. Soon she was performing salon shows, playing at churches, and teaching piano and voice. But Ball’s insatiable need to venture deeper into her vocation left her hankering for more.

“It’s important for artists to be responsible in society with their voice and their craft. I didn’t want to go to a grad school where it was okay to come out grumpy and mean,” says Ball. That’s when she found Goddard College. For three years, she flew to Washington for intensive two-and-half-week immersion sessions in a program committed to the instruction of artists as agents of personal and public action. “Goddard teaches you to place your art in the context of your community,” says Ball. Her answer? UNED!TED, a mini concert where she could interweave history with Yeats, gospel music with modern dance, sketch drawing with USO show tunes. “UNED!TED became my graduate thesis,” she says. And for the past three years, the series has become a sort of vaudeville-meets-performance-art show set to a pop music-meets-madrigal soundtrack.

“The UNED!TED series is a perfect reflection of Laura and her many musical talents—eclectic and appealing to different types of people,” says poet Marcus Amaker, a contributor to the series’ Civil Rights-era concert, S!NG!NG Those Songs of FREEdom!

And while UNED!TED keeps her occupied, Ball is working on so much more—composing a ballet for the Charleston Dance Institute, recording Gullah songs as remembered by ancestors of both slaves and slave owners, and working to develop a community arts center on John’s Island.

“How would I describe Laura?” says Cleveland. “‘Multi-talented’ doesn’t cover it. I would just say she’s simply extraordinary.”