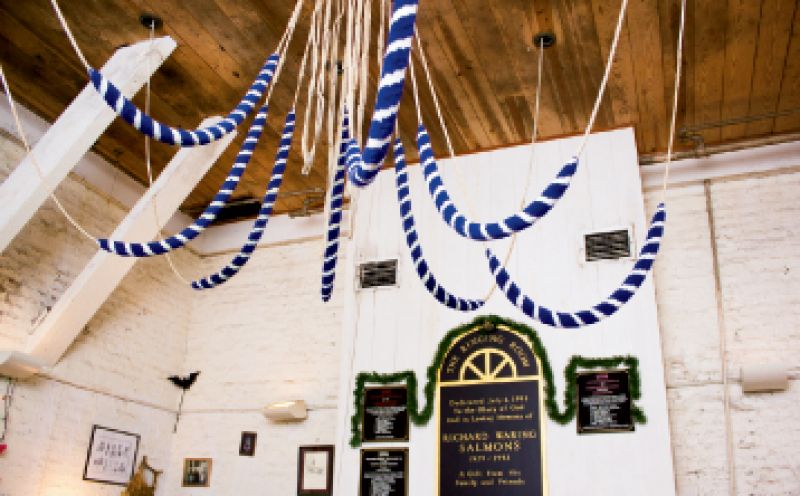 High up in St. Michael’s bell tower on a cold Thursday night, a diverse crew of locals, from 11-year-old Chisolm Jackson to 91-year-old George Williams, gather in a room of white-painted brick. Zig-zagging charts of numbers—the mathematics behind the hallowed sounds of change-ringing bells—hang on the walls alongside photos remembering parishioners past. After all, folks have been gathering since 1764 to sound this church’s bells.

Developed in England around 1600, change ringing involves a band of ringers using a set of bells (usually six to 10) according to numerical changes called “methods.” Each bell is attached to a wheel that has a rope around its rim. Pulling the rope rotates the bell full circle, creating the music you can hear flooding from four area churches: downtown’s The Cathedral Church of St. Luke and St. Paul, Grace, and St. Michael’s, plus Stella Maris on Sullivan’s Island. Charleston has more change-ringing towers than any other city in North America, which claims a total of 52.

Ringers from each church are gathered for this practice. They often join to ring for events like Carolina Day, as well as weddings and funerals. “Most say the best thing about ringing is being part of a group that’s focused on one goal,” says St. Michael’s tower captain C.J. Cantwell. And lucky Charleston, we get to enjoy the results.

The weekend of February 21-23, plan to linger around the Holy City’s change-ringing churches, because the sounds pouring from their towers will be at their most beautiful. The Ring Around Charleston—held every other year since 1997—is attracting some 100 ringers from around the country and as far away as Australia, New Zealand, and England to combine their talents in skill-building practices, challenging performances called “quarter peals,” and church service ringing. Find an event schedule below.

History of the Bells

In 1821, it acquired four bells from an inactive Dorchester church. Three were later cast into a single bell, which—along with most of Charleston’s bells—was confiscated in 1862 to be turned into Civil War cannon. The Columbia shed storing the bells was burned by Sherman’s army, leaving the belfry silent until 1998, when six bells cast in the 1880s were purchased and hung along with two new bells.

Grace didn’t have change-ringing bells until 1998, when it purchased eight circa-1883 bells from an inactive church in England and later two newly cast bells. The congregation built a glass-fronted Columbarium and Bell Tower, where the bells and ringers are visible from outside.

Eight bells cast in 1764 by London’s famous Whitechapel Bell Foundry were stolen by the British during the Revolutionary War. Once recovered, they hung until 1862, when they were sent to Columbia and then burned and broken in Sherman’s March. The metal was sent back to Whitechapel and recast, but upon the bells’ 1868 return, the frame was improperly installed. Until 1993, the instruments could only be chimed (struck with a clapper or hammer), not rung.

In celebration of its 150th anniversary, Stella Maris obtained eight change-ringing bells in 1995, becoming the first Roman Catholic church in the U.S. to have a set.

Find out when ringing will take place at each of Charleston’s change-ringing churches, then look below for explanations of—and etiquette rules for—each type of event, as well as suggestions for where to observe

Where to observe: The most accessible viewing is at Grace Church from the courtyard; the ringers are easily visible through the tower’s glass door, with the bells moving above. Both St. Michael’s Church and the Cathedral have video cameras live streaming from the bell towers onto monitors just inside the entrance to the churches. During services, Stella Maris ringers will be visible high above the choir and organ.

General ringing: Ringers of all levels practice with the coaching of more advanced ringers. The ringing will not always be smooth but is more accessible to the public who want to observe up close, and even ask questions of the ringers when they break.

Quarter peals: During this time, the ringers should not be disturbed at all; the doors to the tower will be locked. The ringers’ concentration must not be interrupted as they complete complex, non-repeating musical patterns that last an hour to hour and a half. The sounds will be truly magnificent. Completing a quarter peal is an accomplishment that demonstrates a ringer’s mastery. The “performance” quarters, including the most advanced ringers, will be at Grace Episcopal on Sunday, noon to 1 p.m. and at the Cathedral Church of St. Luke & St. Paul from 12:15-1 p.m.

Service ringing: Again during this time the ringers must not be disturbed; the quality will also be exceptional for the congregations.