Know Your Boundaries
January 2012
WRITER:
Melissa Bigner
Walking the limits of the old walled city reveals Charleston’s past and present 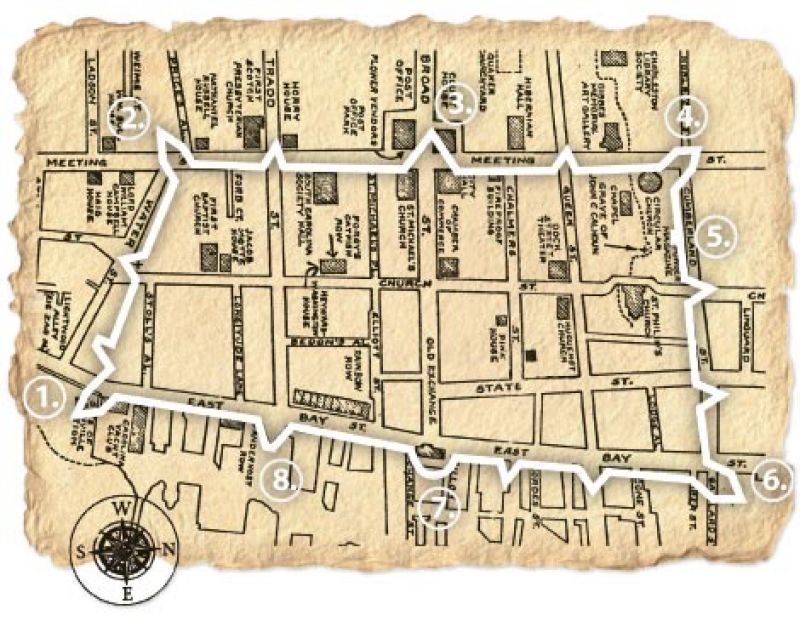 It’s a good thing I don’t mind asking for directions, because I have long abhorred walking around with my face stuck in a map. It’s a lingering bit of teenage blend-in-itis that was birthed when I would visit relatives in Copenhagen and get ecstatic when tourists asked me for directions. And it was set in stone when I moved to Charleston and saw visitors stand oblivious in intersections, spinning a map to figure out which way to the water. There’s a lot to be said for following your nose (especially when on a peninsula) and for the happy accidental discoveries that come with strolling a town.

A few years back, those mapless strolls led me to a handful of bronze markers that noted where fort-like walls had surrounded Charleston from the 1690s to the 1730s, when the French, Spanish, and Native Americans were still viable threats to the fledgling colony. The walls roughly ran from where the Market now stands at East Bay, south to Water, west to Meeting, then north to Cumberland streets. The Cooper River stretch consisted of brick to better fend off potential cannon fire from enemy ships, and the Meeting Street portion was fashioned from earth and wood, as it was intended to thwart Native Americans who might invade from the then-marshy land. Bastions, or four-sided outcroppings outfitted with guns and cannons, punctuated the walls, and there was even a drawbridge at Broad and Meeting. Cool.

I gathered all this from reading these plaques and from some of my own research, too, since the walls were built over, demolished, or simply—in the case of the dirt ones—devolved. But in the end, I got most of my intel, ironically, from a map by the Walled City Task Force that I found at Historic Charleston Foundation. This brochure is killer, as it outlines the old walls, notes the bastion points, and schools you on yesteryear. I scanned it into a PDF that I could consult on my iPhone—thank you Steve Jobs for hipping up the fine art of map-following.

So the other Saturday, I asked my mom to come with me as I “walked the walls” start to finish. Not only is she a former land planner, but she’s often over at the South Carolina Historical Society checking out old-time Charleston maps to see how they relate to today’s cityscape, drainage, and so on. In other words, she’s supremely into the subject.
We started at the Old Powder Magazine—where colonists stashed gunpowder—and checked out the placard map there that showed the old town. We got to talking about rising waters, and Mom noted that where the Market stands now was a creek, and that Water Street was Vanderhorst Creek, which is why those two areas are still prone to flooding. She lives on Chalmers and has always said that if you want to guarantee no flooding, reside inside the old walls (nice zip code, if you can swing it).

Mom and I followed my iPhone from spot to spot, and for the first time walked behind the Old Exchange and Provost Dungeon to see what the approach to the city from that vantage would have looked like, at least after the 1760s, when the bastion that stood there was disassembled. (A portion of the wall—the only part the public has access to—is still visible in the building’s basement.) As we ambled, Mom pointed out how to differentiate between pre- and post-antebellum structures, and we studied alley widths, cobblestones, building heights, and more. The whole circuit was a mere mile and a half, but we stretched it out over an hour and a half.

And while we strolled, families on holiday posed for professionally snapped group pictures, wedding florists ran in and out of churches, and neighborhood folk leisurely walked their dogs. It all seemed so civilized, especially when a little more than 300 years ago, settlers huddled together on these same stomping grounds, behind walls, arms at the ready.