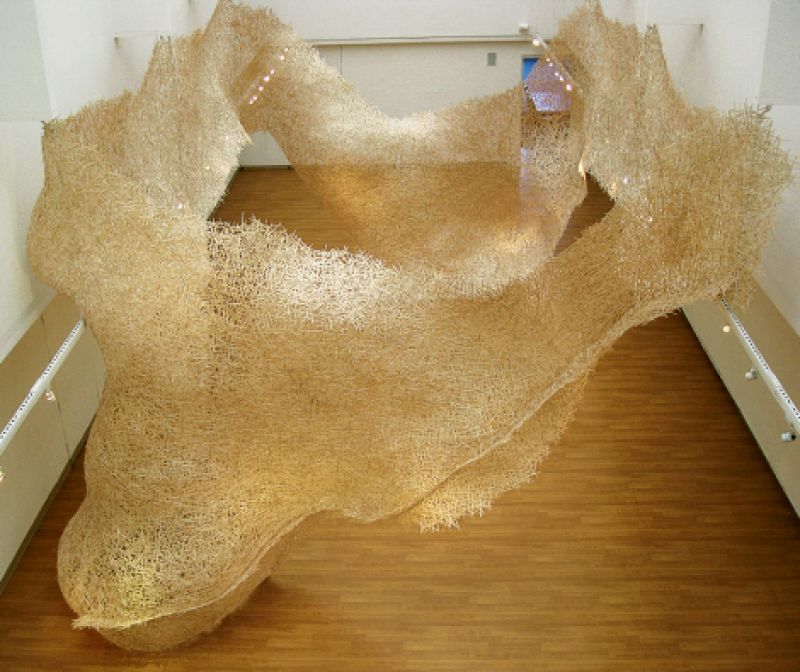 Jonathan Brilliant is less caffeinated than you might expect, given that his current gallery installations are made up of coffee lids, coffee cups, works on paper based on the accoutrements of coffee culture, and sweeping sculptures made of seven-and-a-half-inch wooden coffee stirrers, held together only by tension. True, we’re meeting in a coffee shop on East Bay Street, and he’s talking like wildfire, but he’s drinking water to put out the flames. “I’m not so much interested in caffeine as I am in caffeine culture,” he says. “I do like a couple of shots of espresso, though.”

The 33-year-old Columbia resident is currently on a “Have Sticks Will Travel World Tour” of 13 galleries in 18 months in three countries on two continents. It began with an installation at the City Gallery at Waterfront Park last May and ends with a three-month fellowship at Charlotte’s McColl Center for Visual Art starting in September. “Jonathan is on the edge by using this medium of coffee stirrers,” says Erin Glaze, coordinator of City Gallery at Waterfront Park, where audiences were amazed by his giant installation during Piccolo Spoleto last year. “In his studio, he has boxes of rusty nails. He doesn’t put any boundaries on what he uses, allowing the medium to surprise him.”

Brilliant designs his stir-stick sculptures to fit each space and incorporates gallery structures—like a staircase or chandelier—into the woven work. “I think of them as drawings in space, collapsed objects, distorted baskets that have been fed through some sort of digital filter, crumpled architecture,” he says. Each piece, made up of 50,000 to 60,000 sticks, takes about seven days to build on-site, and visitors can watch. “I turn the gallery into a studio,” he says. “You’re seeing the direct gesture. The materials are unaltered except for the insertion of my labor. I like the sculptures to settle and change shape. If they fall, that’s OK; it’s part of the process. If they fall after I leave, all the better. I can come back and do it again.”

Brilliant (“Yes, of course,” that’s his real name, he says) is a native Charlestonian. But finding the city confining, he moved to Alaska at age 18. “It was as far away from Charleston as I could get without a passport,” explains the artist. He returned to study studio art at the College of Charleston and, after graduation, found himself working at a paint store and spending a lot of time sitting in Starbucks, drawing. He saw the coffee shop as his natural environment and began “liberating” materials from it. (These days, he has a supplier.)

Brilliant left Charleston again “to gain some perspective,” pursuing his MFA in spatial arts at San Jose State University, where he was greeted as “an unknown emerging artist from nowhere.” A fan of American art of the 1960s and British art of the 1970s and ’80s, this self-proclaimed “Southern has-been and British wannabe” was most influenced by the “new British object-makers”—a long list that includes Andy Goldsworthy, Richard Deacon, Tony Cragg, Antony Gormley, Bill Woodrow, and Rachel Whiteread. Like them, he uses many different materials, often whatever he can find. His works on paper, for example, include rust prints of patterns formed by oxidizing steel.

“I’m still uncomfortable with the label ‘artist,’” says Brilliant. “It’s only been 10 and a half years since I did my first drawing. I might just be someone who makes art. I take the work incredibly seriously, but I don’t take myself seriously at all.” And then the excitable guy is out the door—places to be, stuff to do, distorted baskets to weave in space. 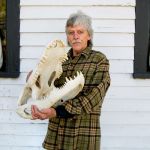 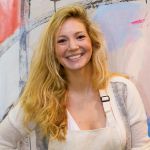