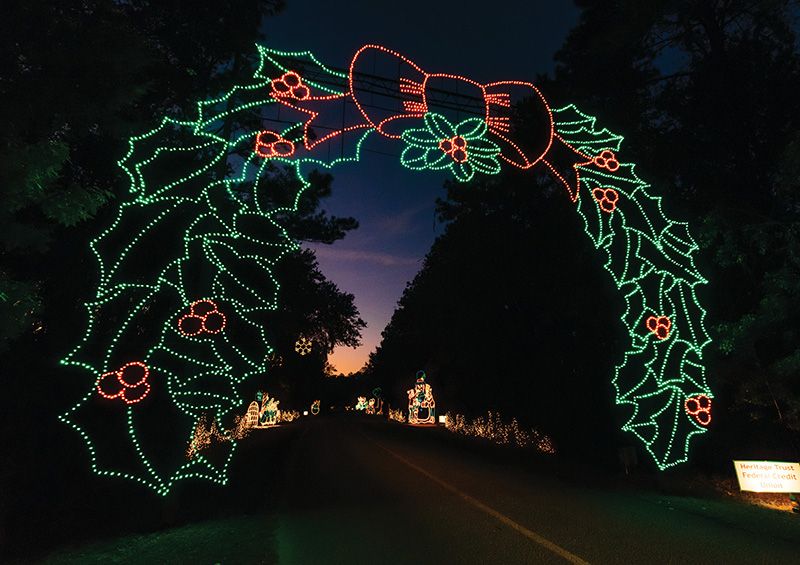 The lights at James Island County Park are a reminder that holiday magic is more about what we turn on and turn off. It’s always there, just waiting to be activated.

Here’s what I remember from my first triathlon: nerves, the comic ridiculousness of “running” after biking, and disillusionment. The race was part of the James Island County Park Sprint Series, and it was years ago, so many, in fact, that I recall taking the baby seat off my bike before heading out (those babies are now in their 20s). But as I plodded along the racecourse through the park’s lovely wooded trails, I still remember my disappointment—and not just due to my glacial pace. This was July or August or some ungodly furnaced month, and there they were, plain as day: the Holiday Festival of Lights displays.

Granted my vision was blurry from sweat, but I can spot a giant menorah amidst live oaks from a mile away—even if I still had to run that mile. While, yes, there are plenty of deer and birds in the park naturally, that didn’t mean the light-strung Rudolph didn’t go undetected or that the giant dove with an olive branch mingling with the Spanish moss was flying beneath my radar. Discovering that the park’s signature holiday extravaganza was mostly up year-round (though unlit) smacked me of cheating. I prefer my holidays to be special, once-a-year kind of affairs, celebrations that require umpteen errands and well-spiked eggnog, not just flipping a switch. Plus, if there was cheating to be had, I wanted it to be me, tempted as I was to shortcut the out-and-back race loop.

This December, however, I say flip the switch. In keeping with this off-kilter year, 2020 will be the year of Christmas as un-usual. No fancy office holiday gatherings; no wacky costumed throngs on East Bay for the Reindeer Run; no kids tugging on Santa’s beard at the Marion Square Holiday Farmers Market. In fact, the car-centric Holiday Festival of Lights is one of the few local traditions able to carry on—the drive-in version of “fa-la-la.”

But here’s what flipping the switch might look like: Realizing, with delight rather than disappointment, that Christmas (and Hanukkah and Kwanzaa) is always here, lurking in the shadows, hiding, like covert light displays, in plain sight.

After months of isolation, caution, and worry, we need holiday razzle and dazzle more than ever. Celebrations give us a needed break from routines, especially in cold, dark December. They satisfy our craving for surprise, give us an excuse to drag out the “ugly Christmas sweater” and hide the Elf on The Shelf. Holiday traditions connect us to our past and our people. You can bet I’ll be baking my grandmother’s “nut fingers” then dousing them, heavily, in powdered sugar. For me, Christmas is a potent cocktail of magical thinking and tangible, sensual reality. A time to believe in angels, twinkling stars, and goodwill to all as I bask in candle glow, smell Fraser firs, and eat sugar cookies with too much frosting. It’s hard to go caroling on Zoom. It’s even harder to imagine goodwill to all when we’re still bruised by an election season based on anything but.

Yet the lights at James Island County Park are a reminder that holiday magic is more about what we turn on and turn off. It’s always there, just waiting to be activated. The iconic front door decoration at the Nathaniel Russell House is made from fruits you can find every day at Harris Teeter. The toys at Wonder Works can work just as much wonder in March as they do wrapped up under a tree in December.

Wonder works when you let it. When you look for it. When you slow down enough to pay attention to it. Slow was one thing I had going for me during that long-ago triathlon. I hope I can call on it again. When COVID has displaced so much, I want to tune into where holiday magic awaits in unexpected places. Perhaps in mangers, on wooded park trails, at Harris Teeter, and maybe even on Zoom. 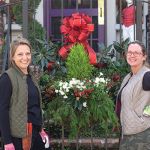 Plant a winter window box you can deck for the holidays 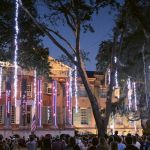 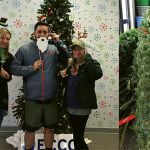