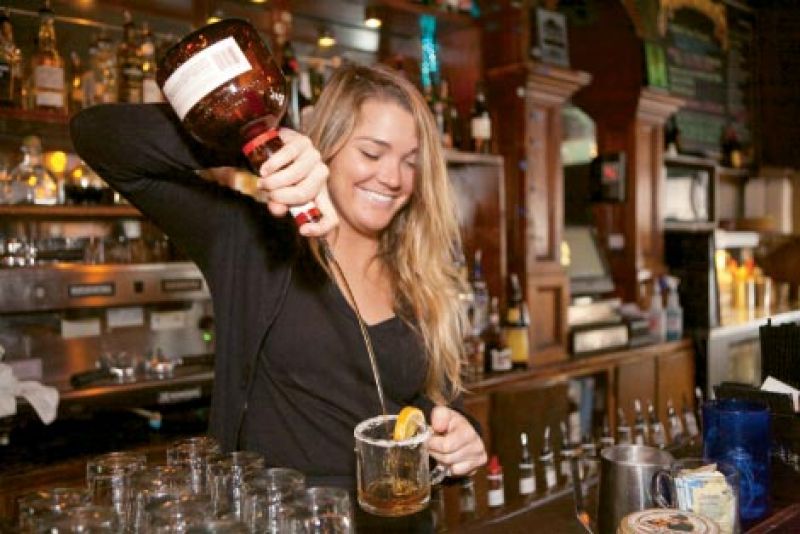 How better to ward off winter’s chill than with a steaming—and spirited—drink? That’s the philosophy at Kaminsky’s, where come cold weather, hot chocolates, javas, and toddies are as tempting as the menu of confections. “We’re pretty popular this time of year,” says bartender Sarah Owen, who’s worked at the Market Street dessert emporium since 2005. “People love to spike a warm beverage.”

Amidst the lineup of piping libations, one of Owen’s favorites is the Monte Cristo. “It’s coffee and Grand Marnier served in a mug with a sugared rim. The flavor is really wonderful and distinct.”

Though a simple combination, the Monte Cristo tends to intimidate customers who aren’t familiar with the orange-flavored Grand Marnier. “Charleston is said to distribute more of this liqueur than any other city in the United States, but many older customers haven’t tried it,” notes Owen. “Once I talk them into tasting the Monte Cristo, it’s always a hit.”

It’s easy to test the libation’s chill-defying powers at home with a few pointers from Owen. “Buy a rich blend of coffee from a local brewing company like King Bean or Charleston Coffee Roasters,” she says. “A lighter roast won’t stand up to the potent liquor.” And don’t skip the sugar rim, which balances out the concoction’s strong flavors. “For garnish, sprinkle orange zest on top of the drink or add an orange slice,” suggests Owen.

Served alone, the Monte Cristo is the perfect after-dinner treat. “But if you want to pair it with dessert, go with a white cake or something light. Chocolate is often too heavy.” Now sit back, relax, and pretend there’s a soft snow falling outside your Lowcountry window.