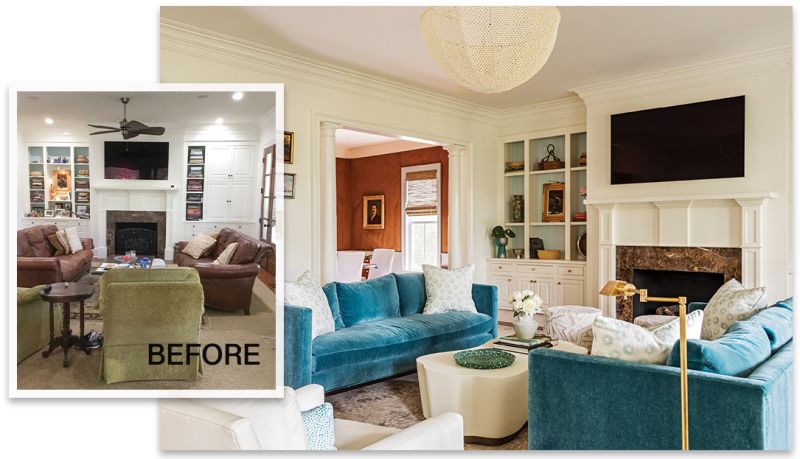 “Do we move or do we renovate?” That oft-considered question arose for one couple 18 years after they built their family home in Mount Pleasant’s I’On neighborhood. Inspired by their two children heading off to college, they decided the time had come for a major change.

After entertaining the idea of selling and finding a new home to start their life as empty nesters, the couple—an artist and a doctor who met in Atlanta and moved to Charleston three decades ago—realized it would be difficult to find somewhere nearly as perfect as their current spot. Nestled on a spacious lot overlooking the marsh at the rear of the meandering, picturesque New Urbanist community, the 5,000-square-foot, five-bedroom home is still regularly full of friends and family, so downsizing wasn’t an option. But they could make the house a better fit for their new lifestyle. Decision made: upgrade in place.

“When the kids were little, we used to throw crab traps off the dock here,” the homeowner recalls. “I’d use the critters as models in my paintings.” Then they’d become dinner for the family. “I always eat my models,” she says, with a laugh. The abundance of wildlife and ability to kayak out their back door was something they couldn’t give up.

The couple set a budget for a significant but mostly cosmetic renovation and approached friend, neighbor, and interior designer Allison Elebash. After nearly two decades inhabiting the home, the wife knew what she loved about it and what didn’t work. (“We never use the dining room, and we need more storage space!”) She was determined to put the house to better use.

To accommodate the couples’ budget, Elebash recommended focusing on the areas that were most important to them. The starting point was the kitchen, where they opened up the countertops and created a butler’s pantry from a mudroom. Then came the bigger projects: renovating the primary bedroom suite, as well as updating the living room, adjoining porch, dining and guest spaces, and downstairs powder room. The overall design approach was to add color, light, and warmth to the home. “She’s an artist, and he has a very busy job, so we wanted to create a place that felt like a sanctuary, but also somewhere they both could work from home,” says Elebash.

Other than incorporating the clients’ extensive art collection and keeping a few heirloom pieces, they replaced almost everything, from furniture and light fixtures to paint and window coverings. While they retained the original flooring, Elebash added several large area rugs to add warmth and color. “The main goal was lightening and brightening everything, as well as updating and modernizing the furniture,” she says.

Dealing with two decades of accumulated clutter was a challenge. There were several smaller rooms that had never had a defined purpose and ended up attracting clutter. Over two afternoons, Elebash helped the couple “Marie Kondo the house,” she says, so they could start fresh. 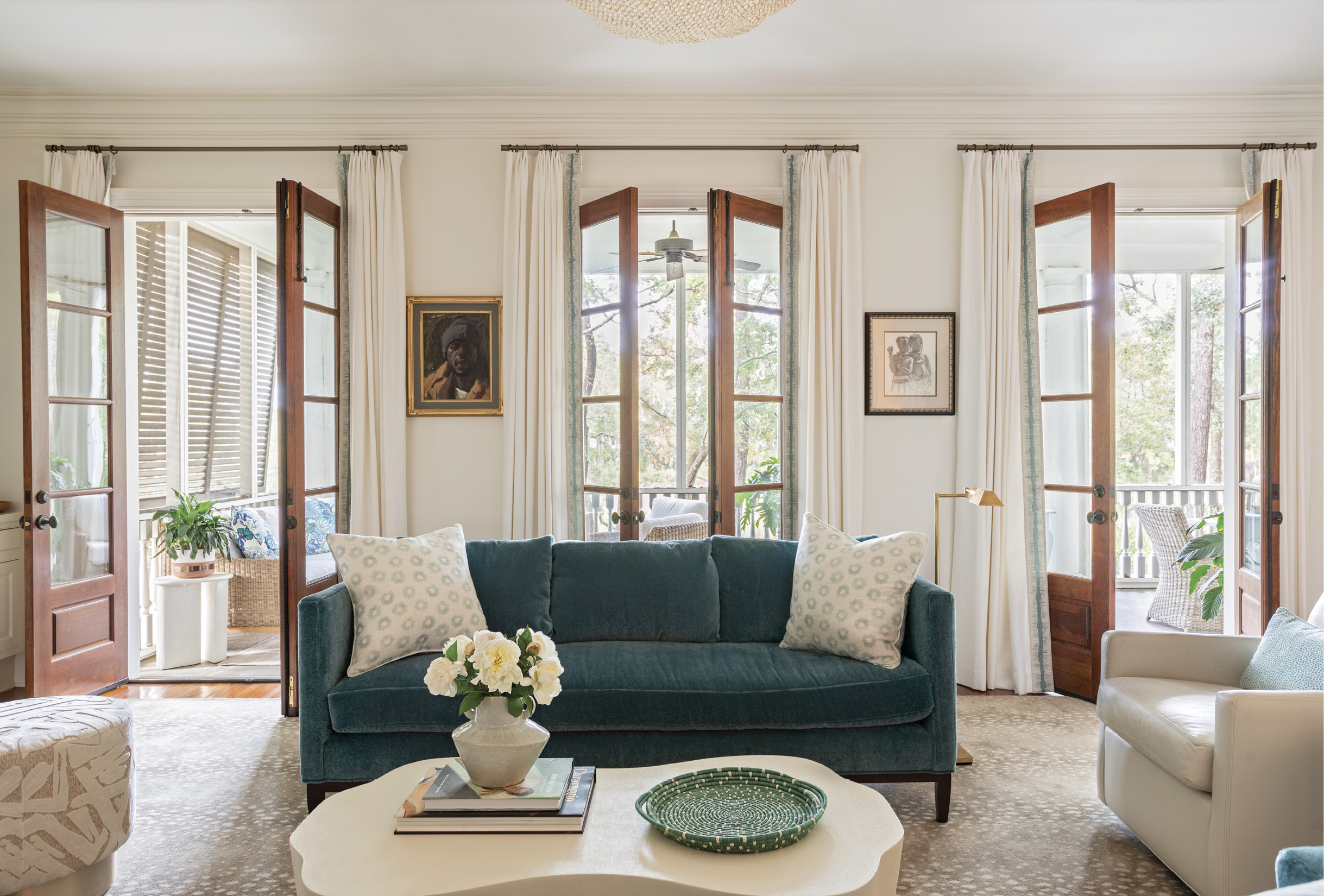 Through five, tall French doors, the living room opens up to a large porch overlooking the marsh. Previously underused, the space was transformed into an outdoor living/dining room, where Elebash conjured a continuous feel between the two areas by bringing the colors of the marsh inside.

A pair of blue-green sofas and a set of white leather armchairs frame a faux Belgian linen “Rockwell” coffee table from Made Goods. The space is tied together by a large Stark area rug. “We chose a lot of organic textures and materials, but it was also important that everything be durable,” notes Elebash.

The renovated porch is now the homeowner’s favorite spot. While they made a few minor updates in the dining room—including adding a large mirror to help brighten the space by reflecting light from the porch and swapping out dark wood chairs for bright white slipcovered seats from GDC Home—this is where the family likes to gather year-round. “We eat out here all the time, it’s just such a great space,” she says.

Also downstairs, the powder room between the kitchen and the living room got a much-needed refresh, with a new playful, textured wallpaper and a graceful white sink wrap. A guest room right off the main entryway shares a similar treatment, with a coral-hued Phillip Jeffries grasscloth wallpaper tying together a warm, welcoming space.

But the upstairs design has been most impactful for the couple. “The primary bedroom was a really fun transformation,” says Elebash. “We lightened it up and created a little sitting room for him and an expansive closet for her.” The two rooms had existed before on either end of the bedroom but had no defined purpose. One had become a storage space, and the other used to be the wife’s studio when her children were little. (“It was right next to the laundry room so I could paint, wash clothes, and keep an eye on the kids at the same time.”) With the children grown, she had taken over their third-floor loft playroom for a more spacious and suitable artist studio, and the small room off the bedroom bred clutter.

Elebash turned the former space into a comfortable sitting room where the couple can watch television before retiring or the husband can work later at night. “It’s his calm space now,” says the wife. “For 18 years, this room barely got used and now it’s his favorite.”

For her, the prior studio was turned into a large walk-in closet. Working with Inspired Closets, Elebash created an organized oasis. “We used to share the walk-in closet off the bathroom, but now I have my own space, and a little desk, which I use as my home office,” she says. 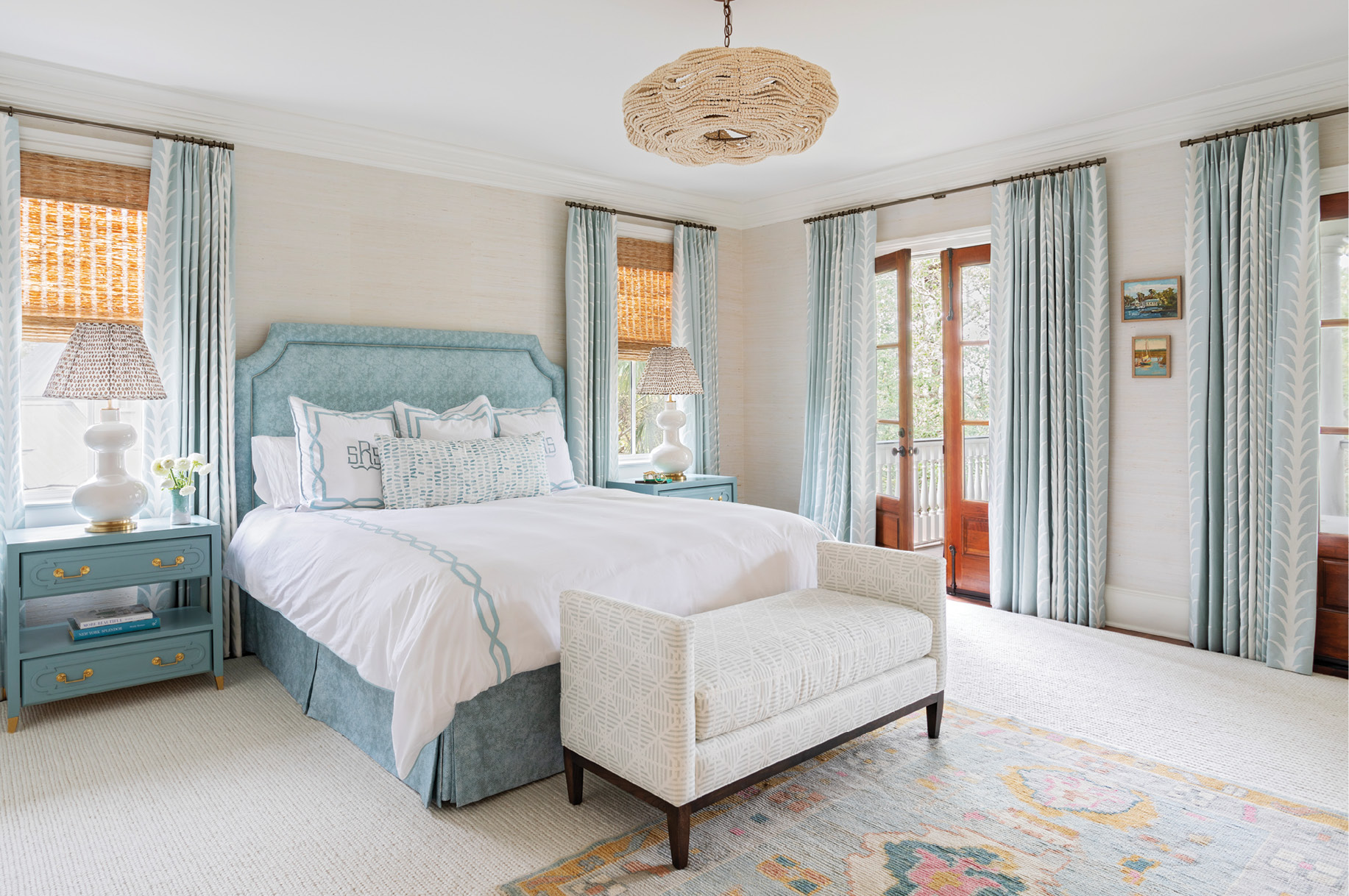 In the shared primary bedroom, creating a sense of calm, free from distractions, was key. “We moved the TV that was over the dresser to the adjacent sitting room, and thanks to the new closet, the main area became a place of relaxation and peace, both visually and mentally,” says Elebash.

She replaced most of the dark wood furniture with soft blue- and cream-colored pieces, covered the hardwood floor with a white wool rug, and the walls with a soft grasscloth wallpaper. An upholstered bed wrapped in a baby blue Maresca fabric from Fritz Porter pairs with two Doorman Design nightstands painted to match. “The bed creates a statement through both profile and pattern that the rest of the room echoes in color and detail,” says Elebash. The overall effect softens the space while simultaneously feeling sophisticated and stylish.

“Spending a little bit more on refreshing our existing house ended up feeling like we have a new house,” says the wife, as she sits on the porch with her young Labrador’s head in her lap. “And now, I know this is where we will stay.” 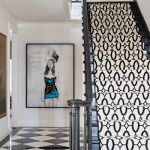 The home’s interior is filled with high fashion-inspired pieces, modern art, and a playful collection of wallpaper 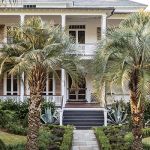 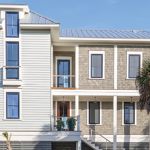