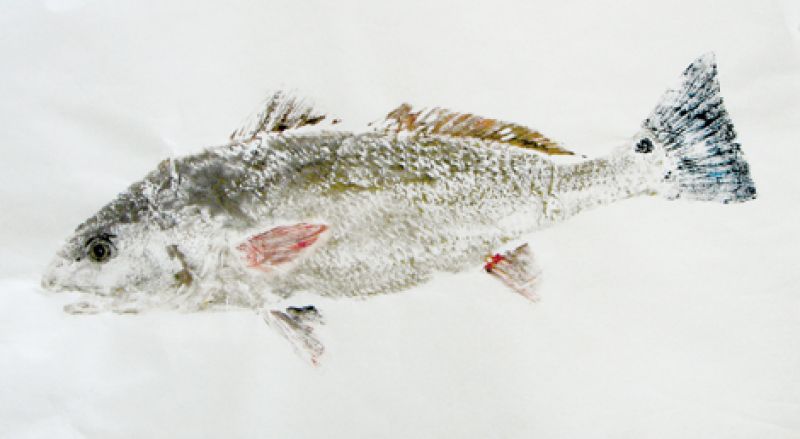 Spanish mackerel, spadefish, tarpon, African pompano, sheepshead—Wendy Allen has painted more than 50 species of fish. But she’s not producing simple portraits of the scaled creatures; the Georgetown artist literally paints the fish. Self-taught in the Japanese art of gyotaku, meaning “fish rubbing,” she inks her catches directly and then places rice paper over the fish and creates an imprint.

Japanese fishermen originally used the technique to record prize catches. Inspired when she first encountered such a print in a colleague’s living room more than 30 years ago, Allen trained herself using how-to gyotaku articles from the public library and inexpensive market fish for practice. Since then, she has learned from her fisherman husband, Dennis, to catch her own subjects, and, today, they scour waterways as distant as Alaska and Mexico.

The printing process begins with a fish that, Allen says, must unfortunately be sacrificed. After washing and towel drying the specimen, she positions it in a way that imitates the species’ particular form and movement and mixes her palette of water block-printing inks to closely mimic the fish’s natural coloring. (Each painted fish generates about four prints, but Allen is usually only happy with one or two.) Finally, she hand-paints the eye with lifelike precision. “I try to show off the creature’s natural beauty,” explains the artist. “I examine the shape of its eye, its pupil, the colors hidden in its scales.”

It’s this appreciation for scientific detail that draws other nature enthusiasts to her work. “Her color choices are so well thought out and give a true representation of the fish,” says Georgetown businessman and avid fisherman Joey Rabon.

Allen, who works as manager of the North Inlet-Winyah Bay National Estuarine Research Reserve, calls herself a conservationist before an artist and regards gyotaku as a mélange of marine science, education, and art. She uses the technique to artfully document the unique character of each fish. Over time, she has become more selective with her subjects, due to overfishing pressures on some species. In fact, in light of the “red fish craze,” the artist no longer prints the red drum chosen from her collection as the 2009 face of the annual Winyah Bay Heritage Festival.

Allen’s work has also afforded her some opportunities to print rare species, like the gargantuan spotted eagle ray that turned up dead in a scientific survey. “I’ve always been drawn by the fact that she won’t be able to print this ray again,” says collector Betsy Brabson, who hung the piece over her mantel. “Its body is so graceful. I love how the tail curves across the canvas and the way Wendy captured even the tiniest spots.” Despite the intrigue of her process, Allen rarely shows her prints, considering her work more personal than commercial. For her, this medium is simply a way to show off some of the region’s most captivating fish.