Great Escapes
July 2015
PHOTOGRAPHER:
Adam Collins
Wanna get away this summer? Whether you’re trekking to foreign turf or suiting up for a staycation, these recent releases from emerging and established South Carolina storytellers will have you uncovering new adventures 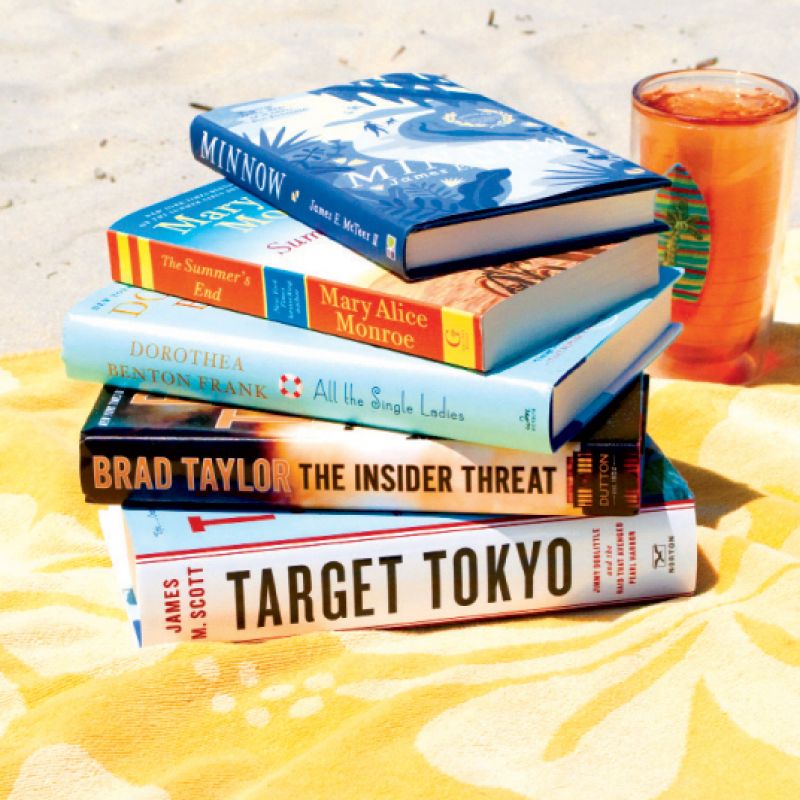 Minnow, by James E. McTeer II (Hub City Press, May 2015, $25)
Winner of the South Carolina First Novel Prize, James E. McTeer’s debut book is a charmer. Lose yourself in the story of Minnow, a brave young boy on a quest to find medicine for his dying father. What starts as a simple trip to town turns into a foreign and fantastical trek through the Lowcountry’s barrier islands—one that’s fraught with tricks and traps planted by the spirit of Sorry George, an infamous witch doctor known to have killed 52 men. Rife with local imagery, this otherworldly tale offers a sense of familiarity to readers in residence. — Molly Ramsey

The Summer’s End, by Mary Alice Monroe (Gallery Books, May 2015, $16)
Return to Sullivan’s Island one last time with the third installment of Mary Alice Monroe’s The Summer Girls trilogy. With the season winding to an end and the sale of their beloved cottage, Sea Breeze, fast approaching, the three half sisters and their feisty grandmother must look to the future by first accepting the past. Having formed bonds as deep as their summer tans, Harper, Carson, and Dora now fight to maintain their newfound sisterhood, the family’s seaside estate, and the romances formed during their season by the sea. — Alex Keith

All the Single Ladies, by Dorothea Benton Frank (HarperCollins Publishers, June 2015, $27)
Mystery and romance abound in Frank’s latest offering revolving around three middle-aged women brought together in an Isle of Palms beach house by a friend’s untimely death. Locals will enjoy constant cameos by real-life locations—from The Obstinate Daughter to GDC—while beach-read seekers from all over will get pulled in by a steamy tale told with the best-selling author’s signature humor and sass. — Anna Evans

The Insider Threat, by Brad Taylor (Dutton, June 2015, $27)
Want a relaxing summer read? This isn’t it. This eighth novel in The New York Times-best-selling Pike Logan series will get your heart pounding from the opening chapter, which takes you inside the mind of an ISIS terrorist in the midst of a public beheading. Throughout this thriller by local Brad Taylor—a retired Special Forces Lieutenant Colonel—Logan and his extralegal counterterrorist unit, Taskforce, must work to save the Western world from an unthinkably evil attack, keeping you enthralled from start to finish. — Anna Evans

Target Tokyo, by James M. Scott  (W. W. Norton & Company, April 2015, $35)
In this densely packed but very readable account of James Doolittle’s 1942 bombing of Tokyo, former Post and Courier reporter and Nieman fellow James M. Scott goes beyond the better-known basics, taking you on a detailed journey from the dark days after Pearl Harbor through the inception, planning, and execution of the assault. Filled with many previously unpublished facts that will excite general readers and history buffs alike, the book is especially interesting in its account of the after-effects of the attack on both Japanese and American militaries. — Wade Razzi