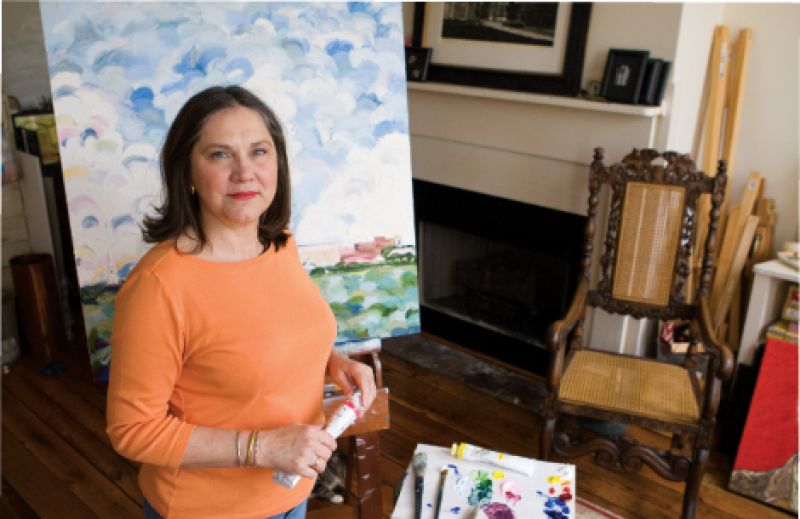 A crayon drawing Lese Corrigan did of a space shuttle zooming across the sky sits on the bookshelf in her King Street home. “The whole world opened up when I was 10 years old,” she says of it and her early exposure to the arts. Born downtown and raised on James Island, Corrigan studied photography at Ashley Hall and later delved into oil painting, linocuts, and sculpture, too. “I want to create work that is unique and pushes limits,” she says of all the media, “both for me and the viewer.”


Growing up in the Lowcountry made a deep and lasting impression on Corrigan, who says she’s still inspired by changes in the landscape. “The sparkle of light on the water excites me. Nothing here is static—everything moves. Even the sky is alive.” She captures that liveliness mostly in oil now, employing vivid colors and loose brushstrokes that put her paintings somewhere between Impressionism and Expressionism. Corrigan says she draws from a variety of influences, including van Gogh and Matisse, as well as an endless stack of books that spills from the shelves lining the narrow staircase of her home.


After several years managing different galleries downtown, teaching at the Gibbes Museum of Art, helping to found Charleston Fine Art Dealers’ Association, and eventually serving as its president in 2009, Corrigan opened her namesake gallery on Queen Street in 2005. “I needed a place to exhibit my own work, and thought, ‘Should I just hang my paintings on my back and walk up and down the street?’” she laughs. “Instead, I knew there were other artists who needed a platform, too, so I opened this gallery.” Six years later, the Corrigan Gallery now represents 17 artists, including Manning Williams, Lynne Riding, Kevin Bruce Parent, Duke Hagerty, and Mary Walker. “Lese works hard for her artists,” says Walker, “not just by selling our work but also, more importantly, by promoting our careers.”


As for her own artwork, Corrigan brainstorms and fills journals with notes and sketches while running the gallery. Her “Other Side of the River” series includes 11 paintings that depict the peninsula from a Mount Pleasant vantage, morning and night revealed in split-screen, diptych style. Another series catalogs downtown landmarks—like the Custom House, St. Michael’s Church, and the People’s Building—but it’s her textured skies punctuated by clouds of changing colors that command the viewer’s attention. Corrigan explains that she layers on cerulean and cobalt blues that shift in intensity as light moves across them. “I am working on bringing an even more abstract quality to my work,” she says, “as well as translating my childhood experiences of light and water into a visual form.”


After a lifetime of making art, it’s apparent that Corrigan continues to evolve. “These pieces are all here for a reason,” she notes of the landscapes, an ongoing portrait series that lines the stairwell, and her latest project—so far ideas and sketches about pop culture obsessions that she calls “Crucifix.” Looking around, she says she aims to find the connection in the collective body of work. “I ask myself, ‘What is the common thread here—besides me—and how do I express it?’” Art lovers will surely follow as long as Corrigan keeps asking questions that yield such riveting results. —Amy Stockwell Mercer