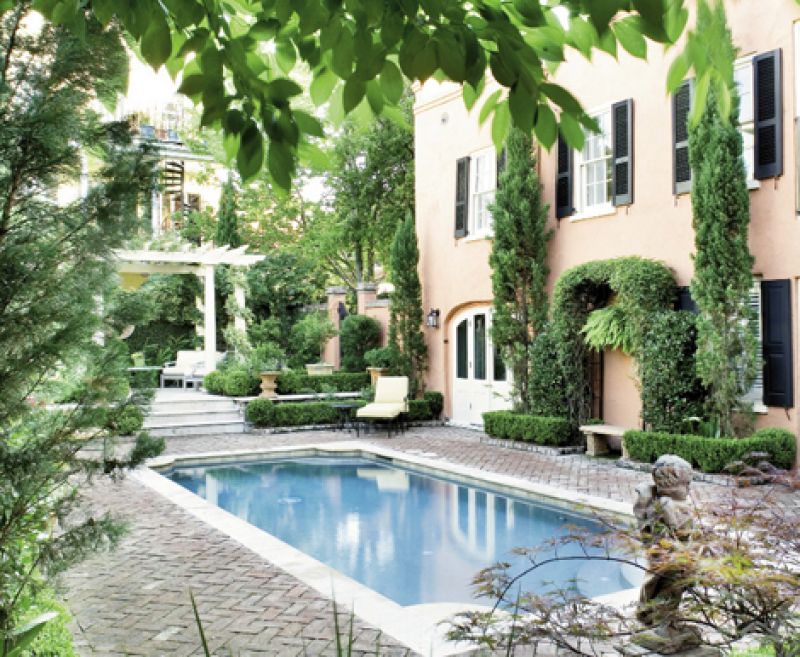 What do you get when you cross two banking execs with a radiologist? Transparent balance sheets, perhaps? How about an elegant Charleston gardenscape, a growing investment grounded in excellent vision. Well, that’s what resulted when former Bank of America colleagues Joel Smith and Carlos Evans with wives Kit and Lisa hired a retired physician with no formal garden-design training to overhaul the outdoor living area of their Society Street duplex. “When they asked me, I didn’t hesitate,” says doctor-turned-designer Gene Johnson, who was undaunted by the task despite the fact that he’d never designed a garden other than his own and was, admittedly, more a horticultural “putzer” than pro.

But neither did the Smiths and Evanses hesitate. After years of being repeat guests at the B&B Johnson and his wife own on Montagu Street, the couples were well-acquainted with his grassroots talent. Each spring for the duration of the Spoleto Festival, the Smiths and Evanses would come from Columbia and Charlotte, respectively, to take up residence in the carriage house, a Gothic Revival jewel surrounded by a lovely formal garden created by Johnson. The boxwood and cypress wonderland was an orderly haven of serene green—a welcome respite from Spoleto’s lively performance and party scene. Over the years, the couples watched as both the garden, and the skills of its keeper, matured.

Enamored with Charleston—both the Smiths and Evanses lived here decades ago, and Joel and Carlos have been longtime festival board members, with Carlos currently serving as the board president—Joel and Carlos “developed a hobby of looking for property in Charleston,” says Kit. “We roamed around until we found this,” adds Joel, speaking of the circa-1839 single house just a block away from Spoleto headquarters. Given that the stately abode was already divided into separate residences, with a pool and small garden in the rear, the couples knew they’d found their pied-à-terre to share.

Though they initially planned to simply spruce up the existing landscape, the couples soon realized that this wouldn’t give them what they ultimately wanted—an Italian-influenced Charleston garden that would allow graceful plein-air entertaining. They invited their friend Dr. Johnson to evaluate the grounds—more of a suburban-style yard centered around a large kidney-shaped pool—and he suggested a complete overhaul: “Start fresh if you really want a Charleston garden,” he advised. And so the Smith/Evans duo became the avocational gardener’s first client, and Johnson began drawing up meticulous architectural renderings for the intimate, narrow space, centering his design on three separate garden “rooms.”

“I’m very visual,” says Johnson in his soft-spoken, native-Charleston drawl. “I guess that comes from radiology. I look for symmetry; I like organizing space. To me, a garden should make sense, more than anything.” For Johnson, this means creating a seamless flow and unfolding drama, so the garden invites fresh observation and a sense of discovery.

And it entails problem solving, too: as in, how to accommodate aesthetic desires with practical stipulations (i.e. the couples’ insistence on a swimming pool, a dining area, and parking space for two cars). Here, the methodical mind of the physician and the creative intuition of the gardener coalesce. “I like figuring out the math, working with curves and radii,” says Johnson, who was equally comfortable ad-libbing it when he decided to throw in a river-stone stoop to segue from the driveway to the pool area. “I added that on the fly,” he says. “I thought it was looking a little too bricky.”

Old Savannah bricks were brought in for a geometric patterned driveway and a peekaboo wall with a custom iron gate (designed with a musical motif, a nod to the owners’ passion for the arts), and this space (sans autos) becomes the party floor for their festival soirées. Tall cypress trees border the pool “room,” adding rhythm and height (echoing the piazza columns) and conveying the desired Italian flavor. Manicured boxwoods, a Johnson signature, provide basic outline and structure, while ferns and annuals, azaleas and camellias give splashes of color and texture. A subtle change in elevation when progressing from the pool area to the sitting area does more than delineate space. “I wanted the steps to slow you down enough to take in what’s around you,” Johnson explains.

The project was definitely a learn-as-you-go experience for Johnson, who admits to never paying much attention to gardens until 20 or so years ago, when he lived on Chalmers Street and city officials warned him to do something about his nine-foot-tall weeds, “or else.” Cleaning up that yard spurred Johnson’s appreciation of the creative potential in landscaping, and he has since gleaned ideas from traveling wide-eyed through English, French, and Italian gardens and studying books on early American garden design. And he’s learned from his mistakes. “It didn’t take long to realize that things sketched out on paper don’t necessarily translate to the real world,” he says, noting the subtleties in getting drainage grades correct and underestimating root-ball sizes. “In many ways, it was like being an intern let loose in the E.R.”

But his clients had utmost confidence in their friend. “Gene really looked out for us,” says Lisa. “His attention to detail is incredible, and he tries so hard to be tactful when he thinks you’re doing something tacky,” adds Kit, appreciatively—even outside of the garden purview. For instance, Johnson gently but persistently suggested they add shutters to the house’s exterior. “‘It’ll make the house,’ he told us, and, of course, he was right.’”

Perhaps the ultimate testimony to the project’s success is the fact that the Smiths, Evanses, and Johnsons remain good friends. “It was a lot of work, completely taking out a pool and adding another one, hunting down old brick that matched, figuring out how to cut limestone block steps,” Joel notes. “But it turned out wonderfully. Finally having a place in Charleston is one thing; having a place with a garden like this makes it extra special.”