Freedom & Formality
June 2007
An emphasis on evergreen binds the rooms of a South Battery sanctuary, where a manicured front garden blends seamlessly with the lush tropical plantings around the bend. 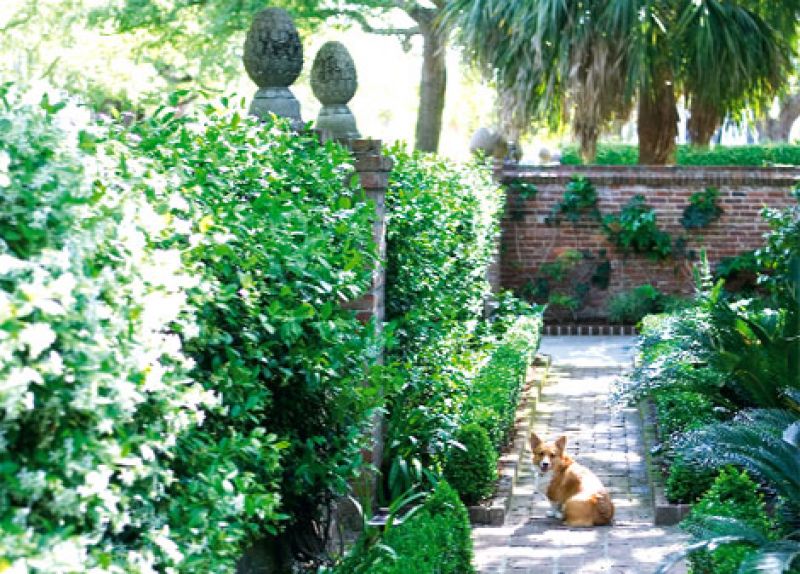 I’ve gone through so many ideas of what I wanted this space to be,” admits Andree Caldwell, glancing around at the evergreen plantings bordering nearly three sides of her South Battery house. “But years of traveling and admiring lovely gardens in Europe helped me zero in on what I was really looking for—in the end, the formally laid-out French and English gardens have a charm and geometry that I felt would fit in well here.” Caldwell’s post as a lecturer at the Metropolitan Museum of Art means that her life is all about visual stimulation, so you can bet her eye is trained to determine quickly her likes and dislikes. And when she first moved in, the area that surrounded her house was definitely a dislike. “The space could be described at best as lackluster and at worst a total shambles,” says landscape architect Sheila Wertimer, who was brought on to tackle the project. In fact, it was the exact opposite of what Caldwell envisioned: a garden that not only reflected her lifelong relationship with art, but that actually became a part of that passion. “I wanted the garden to reflect my eclectic art collection,” she says. “Without ever hearing the term ‘garden room,’ I thought that it would be interesting for a garden to have different rooms, and I wanted each to reflect the artwork inside the interior rooms that looked out upon them.”

Artistically Inclined
It turned out that the garden room concept was just what Wertimer had in mind as she faced the challenge of designing a sophisticated garden within a small area. To make it feel larger, she developed room-like spaces joined by a path that runs seamlessly through the garden, lending unity while at the same time imparting a sense of excitement and diversity. In keeping with Caldwell’s desire for a connection between the indoors and out, the feel of each room varies according to the artwork found inside. For example, the formal look of the front garden echoes the formal French paintings inside the living room that faces it. Similarly, one may stand in the den and look upon a life-sized reproduction of a tropical Henri Rousseau scene that Caldwell’s friend, Katharine Barnwell, painted directly onto the wall. “Then you look past it into the pool area, with its tropical plant life,” says Caldwell. “Making the connection to the gorgeous greens in the garden, where the filtered light and the colorful plantings create interesting nuances, adds another dimension to what hangs inside.” However, while the views from house to garden were taking shape nicely, Caldwell still had to counter her view from house to the street—without any enclosure, the eye just wandered out to the traffic beyond. Today, draping vines of Confederate jasmine, Trachelospermum jasminoides—a Lowcountry favorite—provide plenty of privacy, as the plant’s climbing branches create a dense layer of foliage over the front fence.

Nature’s Course
Work didn’t stop with Wertimer’s original design, however. “Over the next few years, the garden continued to grow, developing into this wonderful, lush, secluded space,” says Caldwell. “I felt it was time to add another dimension.” For this she turned to Robert O’Dell, owner of O’Dell Landscaping. “Robert and I walked around the garden and talked about the feel of the space and also looked at the views from the house,” says Caldwell. “Above all, we discussed the need to keep that lush, tropical feel that had been created over the years. At that point I basically turned over the garden to him and said, ‘Have fun with it.’” And over the past four years, that’s exactly what he has done. “The Caldwell garden was a refreshing challenge from the onset,” says the self-taught landscape designer. “Andree wanted to see interesting plants, unique combinations, and great foliage fill many of the spaces that the shrub and tree layer left blank.” It was apparent from the start that the two were thinking along the same lines. “I showed her a few books with examples of the perennials and tropicals we could use, and she was open to these new ideas.” Many of the plants O’Dell chose are those rarely seen in Charleston gardens. For example, only a few steps through the front gate, giant-leaved bear’s breech, Acanthus ‘Summer Beauty’ are just starting to produce flowers. “Those developing flower spikes will begin to flower out at about five feet,” says O’Dell. “It’s the only acanthus that likes it here in our Charleston summers.” Then, he explains, there’s the coveted leopard plant, Ligularia tussilaginea ‘Gigantea,’ “that has leaves that can reach 15 feet across.” Assorted gingers, shade-loving sedges, hardy ground orchids, toad lilies, and more are added to the list of plantings. Yet of all the spaces in the garden, O’Dell’s most prized choices lie in the tropical side garden. “This is the sunniest space outside of the pool area, so things like the pineapple lily, Eucomis comosa ‘Sparkling Burgundy’, giant-leaved princess flower, Tibouchina grandiflora, and the red firespike, Odontonema stricta, have all found homes here,” he says. The central oval bed is defined by a look of controlled abandonment. “I let these plants sort of intermingle. It gives them the opportunity to form some interesting combinations,” O’Dell explains. While this space is left to overgrow a bit compared to the formality of the front garden, he admits, “There is a fine line between the jungle and the attractively overgrown look. And it doesn’t take much for it to go to the jungle.”

All Grown Up
Beyond the side garden sits the pool garden, where the small beds have proven to be one of O’Dell’s greatest design challenges. “It is the sunniest of all the garden spaces, but there is little planting room,” he says. Further complicating the situation are all the irrigation lines and buried wiring for pool and lighting. O’Dell’s solution is a Mediterranean plant palette featuring heat lovers such as dwarf citrus, blue plumbago, Plumbago ariculata ‘Imperial Blue,’ and flowering maple, Abutilon megapotamicum. Among O’Dell’s favorites? “The firecracker plant, Russellia equisetiformis—it has not only survived in this oven-like environment, but thrived.” When it comes to space constraints, Caldwell’s old oak trees also present a problem. “They’re wonderful, but the massive roots do restrict planting room,” says O’Dell, adding that their outstretched tree limbs—while offering welcome shade in the heat of summer—mean there’s a constant leaf drop and a steady flow of organic matter accumulating in all the planting beds. “Because of this, we have a problem with things rotting,” says O’Dell. The low hedge that makes up the French parterres to the left and right of the front door causes similar problems. “We have had to replace several of the small boxwood hedge plants over the last few years because of the excess moisture caught up in the beds.” Through the relatively minor challenges, however, the garden has earned its keep. “When people come here, this is where they want to be,” says Caldwell. For this she credits the collective hands that have spent the last six years tending to it, making it an integral part of her home. “I want to feel like I’m in a tropical world where exotic things grow wild, where breezes can turn the garden into a melting pot of sights and scents.” 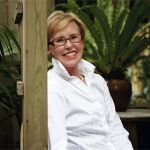