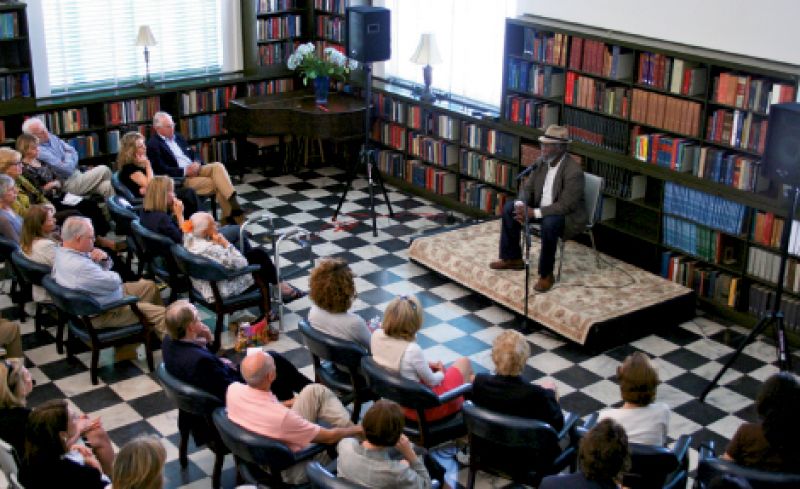 Hungry for more than another grilled chicken salad to power your workday? Craving some intellectual protein, some curiosity-stoking carbs, perhaps, to curb your cognitive appetite? Then check out what’s being served up this fall during the Charleston Library Society’s deliciously intriguing Wide Angle Lunches series.

Now in its third year and fifth season, Wide Angle Lunches is the brainchild of Oxford-educated international lawyer Caroline von Nathusius, who began a similar program at her former law firm in London before moving to Charleston in 2009. “People’s workdays were so high pressured that they hardly stopped to breathe, much less eat,” says von Nathusius. She began inviting Oxford professors to give lunch chats and found that her colleagues loved them. “It was amazing how refreshed and renewed people felt just by taking one hour out of their day.”

When considering where and how to replicate noontime intellectual noshing on this side of the pond, von Nathusius approached Library Society executive director Anne Cleveland, who immediately said yes. Turning the library into King Street’s latest lunch hot spot was in sync with Cleveland’s mission to rejuvenate the venerable 264-year-old institution and reclaim its “cultural, intellectual, and social oasis” roots.

“Caroline has worked miracles,” Cleveland enthuses. “She’s remarkably bright, energetic, and engaging and has brought a fresh view to the array of programs we can offer here. Her ability to attract fascinating international and local speakers has enabled us to project ourselves in a way that I never dreamed possible.”

Attracting presenters has been surprisingly easy, notes von Nathusius, who gleans speaker ideas from her own broad interests and reading. “When I ring someone up and ask, ‘May I invite you to Charleston?’ I often get an immediate positive response,” she says. Past series have featured wide-ranging thinkers from Sharifa Rhodes-Pitts discussing Harlem as the Mecca of black America to John Jeremiah Sullivan pondering an early attempt at creating an enlightenment utopia in Carolina. This potluck approach seems to work.

“We live in a world of such infinite choice—it’s a relief to spend an hour in this beautiful space and simply take what you are given, to be surprised as you listen to whatever it is that ignites an expert’s curiosity and passion,” says von Nathusius. Indeed, “Stop, Eat, Listen” is the series’ beckoning call, and Charleston’s young professionals are heeding it. Support from local businesses, including Nexsen Pruet and the Bank of South Carolina, and from the Harold C. Schott Foundation is helping the audience grow wide.

This fall’s menu includes Rupert Edis, a British adventurer, talking about Afghanistan in literature and reality; Timothy Birendra Marthand, a pianist from India, speaking on a classical music academy he’s founded there; and science journalist Florence Williams discussing her new book on the natural (and unnatural) history of breasts. Check wideanglelunches.org for a full schedule and to reserve a ticket (which includes lunch from Butcher & Bee).