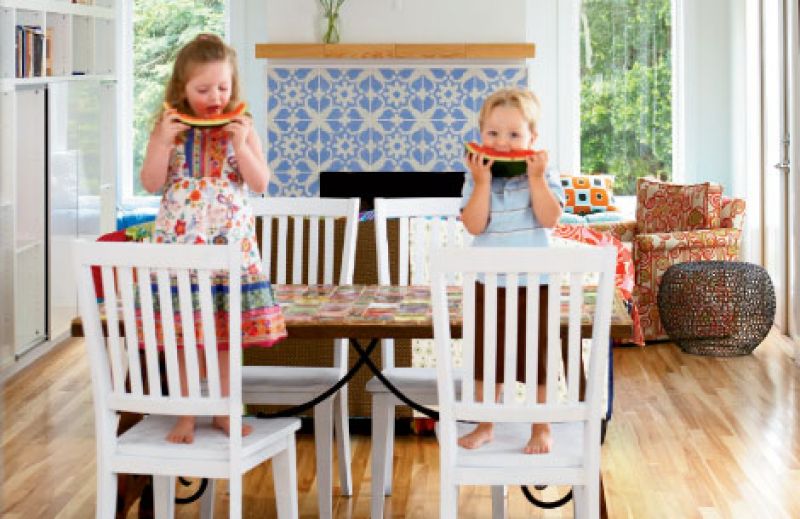 Just how does a cosmopolitan gal like Karen Kearns, well-accustomed to the allure of urban settings from New York City to Barcelona, end up living the screened-porch life along a sleepy street in McClellanville? To hear her tell it, the journey has been less a departure and more like a homecoming. “McClellanville wouldn’t let me go,” she says. “It’s cliché to talk about following your heart, but what can I say? That’s what happened.” And her heart has everything to do with her new home here. Born in Germany, where her father was stationed in the Air Force, Karen traveled the globe with her family and later to Guatemala and Spain for her own adventures and studies. She first fell for the Lowcountry as a graduate student at the College of Charleston. But New York beckoned, and it was there that she met her husband, John. The couple settled into a Jersey City brownstone, a 10-minute train ride from bustling Manhattan, where they welcomed children Addy, now four, and Coeburn, two. After a trip to Spain, they initiated plans to relocate their family to Barcelona. But when John unexpectedly died two months later, Karen began reconsidering her options. Follow through on the move to Spain or return to South Carolina, where she could be close to family in Myrtle Beach and Conway, not to mention dear friends in Charleston? “I don’t like to admit I need help, but I do,” says Karen. “I knew that being near family would be good, and I wanted that for my kids.” As for how McClellanville entered the picture, Karen recalls driving through with John years earlier and asking if he could ever live in the laid-back village. “Wherever you are is home,” he replied. So though she considered several options closer to town, Karen decided to buy a lot and began making plans. She enlisted McClellanville-based father-son builders Bill and Nathan Youngman to work with her on the design, which she mostly developed from scratch. “I’m big on everything in the house having meaning,” says Karen, and her mindfulness shows from the layout of the 1,600-square-foot home to its functional details. With help from the Youngmans and inspiration from Sarah Susanka’s The Not So Big House, Karen’s sketches of Southern-style shotgun cottages and California straw bale houses morphed into a home dedicated to family and livability. The main living area is anchored at one end by a hearth and maximizes space with high ceilings, window seats, and bookshelves lining the room. The bedrooms open to the living area via sliding barn doors that, when closed, reveal additional built-in shelving. At the other end, the kitchen leads to a multiuse room with Karen’s desk, a washer and dryer, and more storage. By way of a pocket door, this “away room” can be shut off from the busy household and provide instant sanctuary. “I wanted subtle—and not so subtle—tributes to John throughout the house,” says Karen. The shelves and cabinets are lined with her late husband’s books, and the hallway is a showcase for his butterfly and black-and-white photography collections. Other nostalgic nods to John—a native New Yorker—include doorknobs salvaged from New York Public School buildings and a light fixture made from Czech glass, a reference to their first date attending an exhibit at the American Folk Art Museum. The pale wall color and hardwood floors give the house an airy space for the colorful and whimsical pieces Karen has scavenged, bartered, and repurposed to make a creative haven for her family. Topping her dining table is a collection of quirky ceramic tiles accumulated over the years. A Spanish interpreter by trade, Karen asked the artist to craft some with Spanish words to help make learning the language everyday fun for Addy and Coeburn. More colorful tiles on the fireplace as well as in the master bath remind Karen of her time in Spain and her plans to travel with John. She got a good price by telling the Miami shop owner, “Just throw in whatever you have. I don’t want perfect. If you have any with blemishes, give them to me.” Handkerchiefs passed down from a neighbor were used to make curtains in her bedroom. An egg-shaped bathtub bought on closeout serves as the kids’ favorite reading spot on the front porch. So how are they settling into McClellanville? Family is still at the forefront, as neighbors have become “like grandparents” to Addy and Coeburn. “When they say it takes a village to raise a child,” says Karen, “they must have been talking about McClellanville. Though we joined families that have been here for generations, we felt immediately welcomed and right at home.” From Addy and Coeburn’s personal cubbyholes to art supplies on the porch to a screened-in play area under the house, security and fun for her kids have been the guiding principles of Karen’s design. “With everything, I weighed the question: is it a good thing for my children?” If the giggles of Addy and Coeburn are any indication, Karen has given them a house full of good things. And her labor of love in the heart of McClellanville is truly a place where the family spirit is alive and well. Family Style Karen Kearns fills her house with happy memories and imaginative elements.