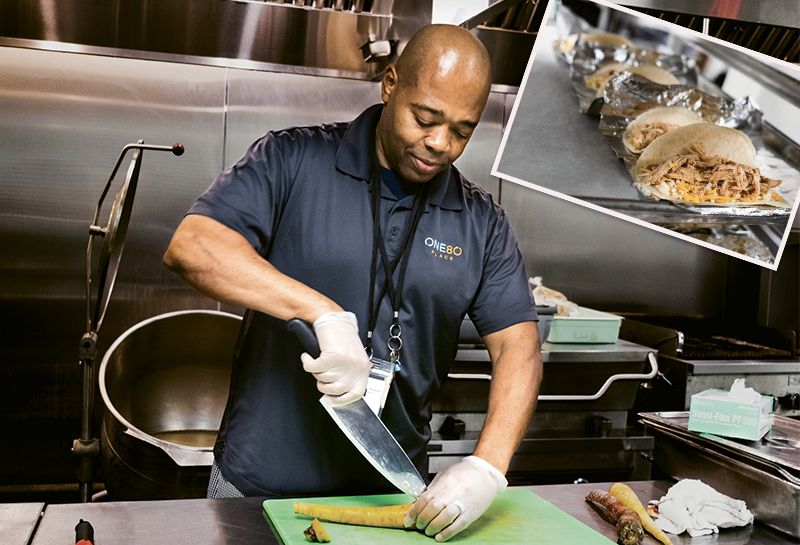 After breakfast, Straford Brown and his team prep lunch, which is open to the public; (Inset) Thanks to donations from dozens of area restaurants, One80 Place provides 160,000 balanced meals each year.

By the time volunteers arrive at One80 Place for breakfast service, Straford Brown has already been there an hour and a half. He leaves his home in Knightsville, just north of Summerville, at 3 a.m. to make it to the homeless shelter’s Meeting Street kitchen in time for breakfast prep. “There’s always something to do,” says the humble community kitchen assistant.

Plating fruit salad, scrambled eggs, and donated Chick-fil-A biscuits, Brown bops his head to soul music coming from his tablet amplified inside a white industrial bucket. The Stylistics’ “Break Up to Make Up” serenades his small staff and three volunteers as he patiently instructs them on how to properly prepare 130 trays before the hungry shelter residents line up at 7 a.m.

“Everyone gets something to eat,” says Brown. And he does mean everyone. Even when donations are tight and homeless numbers rise—which tends to happen after the holidays, in January especially—the 160 men, women, and children who live onsite all get a hot meal to start the day. That’s essential, says Brown, because you can’t begin again without the fuel you need to get you going.

That’s why Brown joined One80 Place’s culinary team. He took the job two years ago, after moving to Charleston from New York when a relative became ill. “I’d gotten training at Culinary Institute of America and worked in another similar facility,” he says. The transition was a natural fit for Brown, but it was a huge win for the shelter.

“He’s never been late except once when he was having car trouble, and I thought something terrible must have happened,” notes Maddie Storts, the shelter’s community kitchen manager. “No one on staff is more reliable than Straford.”

That dependability is essential for the nearly 1,600 homeless individuals One80 Place serves each year as well as for the desperately needed volunteers. While recruiting lunch and dinner helpers is no problem, convincing people to leave their cozy beds to serve breakfast to the homeless is always a tougher sell, and Brown’s positive personality and careful instruction keeps committed volunteers coming back. But that doesn’t mean One80 Place doesn’t need more.

“We can always use the help,” says Brown. “Just sign up.”

Helping Hand: To volunteer during breakfast service at One80 Place, visit one80place.volunteerhub.com.