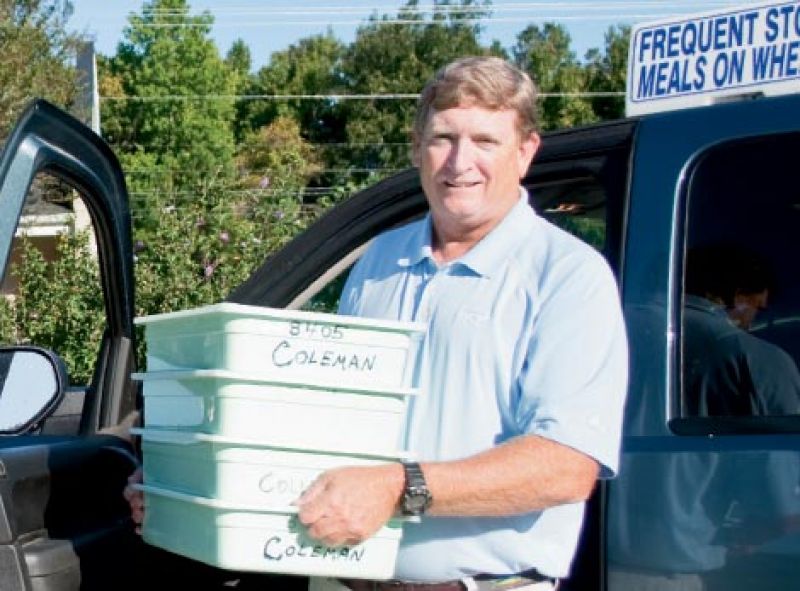 The course of Eddie Williams’ life shifted one rainy February day in 2006. Asked to skedaddle while his work-at-home wife fielded a call, the recent retiree hopped into his pickup and headed to Carolina Seafood. Before he could make it, though, a rogue truck forced him off the highway onto Old Georgetown Road, where a construction ditch blocked his exit. Looping right led him into a funeral-parking snarl, so, guided by security, he slid into a side lot to turn around. The only available space put him in front of a small office. Fate, it seems, steered Williams straight to East Cooper Meals on Wheels (ECMOW). “I’d been needing something to do and was honestly afraid to leave without going inside,” he chuckles. That was almost seven years ago, and Williams has been in high gear as an ECMOW volunteer ever since.

At least once a week, the 56-year-old hits the road to personally deliver hot meals to about 20 shut-in seniors. But when this jovial guy rings the doorbell and hands over those dinners, he’s passing along more than just sustenance, sharing a smile, a conversation, and a bit of company with sometimes-lonely folks. Some simply take the meal with a nod, while others chat so much Williams loses track of time. “You get to know the people on your route so well,” he says. “Sometimes I think the ECMOW drivers are the only people they see every day. A lot of them are teetering on the edge of assisted care, and our meals help them keep their independence.” Perhaps seeing himself down that road drives Williams to volunteer. “In 20 years, that’s going to be me.”

For now, he’s doing what he can to fuel the cause. “In addition to driving and training other volunteers, Eddie has found creative ways to bring attention to senior hunger and collaborated with other organizations to help support our mission,” says George Roberts, ECMOW president. A member of the East Cooper Fishing Club, Williams taps his buddies every year to grill their catches, cooking 280 portions of dolphin, wahoo, and grouper to be distributed as the day’s hot entrée. Last March, he raised more than $4,000 hiking the Cooper River Bridge Run with a 70-pound pack on his back. And next summer, he wants some of his friends’ children to ride shotgun on his route and learn what it means to truly serve another.

The Dish: ECMOW has about 275 recipients along 16 routes covering Mount Pleasant, Daniel Island, Isle of Palms, Sullivan’s Island, and Cainhoy. The nonprofit delivers a hot meal every weekday and extra frozen entrées for the weekend on Fridays.

En Route: Williams has been responsible for Route 9 every Monday morning for the last six years.

Building Material: Before exiting the work world, the Atlanta native put his time into a career in construction management and custom home-building.

On the Clock: Over the past six years, Williams has put in roughly 1,200 hours for ECMOW.