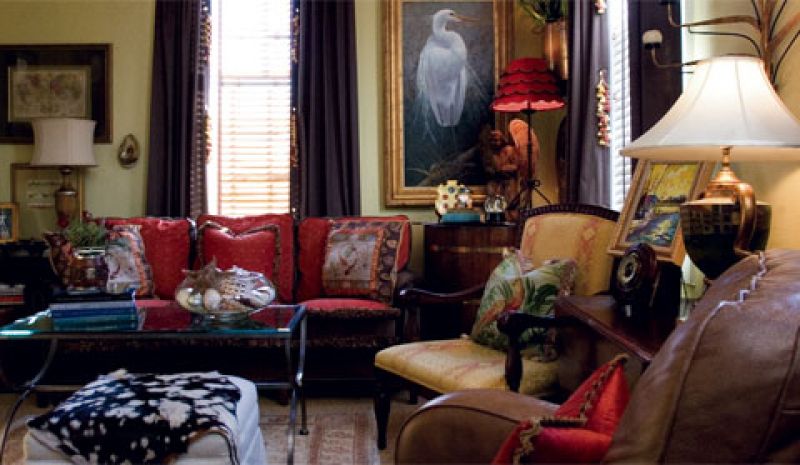 You don’t have to rip everything out to make a space look completely refreshed,” says interior designer Caroline deVlaming. For years she applied this rule of thumb to her clients’ homes, but when the time came to rehabilitate her own condominium in a circa-1842 house in Harleston Village, she had no choice but to follow the same creative code. “I had to work under considerable constraints—many of my changes needed to be completely aesthetic,” deVlaming says, adding that the building is considered historically significant. The three-story house at the corner of Rutledge Avenue and Bull Street was purchased in 1857 by Eugene Joseph Huchet, a cotton trader and French immigrant purportedly descended from European nobility. It remained the family’s home until the 1931 death of Huchet’s daughter, Noemi Elizabeth Huchet, who claimed to be “the only countess living in South Carolina.” The Huchet home changed hands during the ensuing half-century before being divided into six private units in the early 1980s. Each boasts high ceilings, generous natural light, and original hardwood floors. Wary of doing too much too soon, deVlaming opted to live in the unit for a year before making any changes. Just three months later, though, she moved out and called in contractor Christopher Gadsden. “I think it was a water leak that started the whole thing,” recalls Gadsden, who was faced with the challenge of making over the condo’s single bathroom without exacerbating a leftover plumbing glitch. “The room had a four-by-two-foot hole in the tile, through the concrete, and down to the original pipes,” says deVlaming. “It was a head-to-toe job, literally down to the studs.” Because of the plumbing constraints, explains Gadsden, “the shape of the room stayed pretty much the same.” This prohibited the removal of the cast-iron tub, but the remaining fixtures were replaced and the floor sealed and retiled in marble. Though deVlaming had originally planned to leave the plaster ceiling as it was, Gadsden had to replace it with Sheetrock when the plaster caved in. Cracked subway tiles were traded for white beadboard along the bottom half of the walls, the upper portions hung with Sheetrock and painted. The linen closet opened into the hallway, perhaps originally to house a dumbwaiter, so Gadsden moved the door inside the bathroom. Once this phase was complete, deVlaming turned her attention to the galley kitchen, made even smaller by the guest-room closet that jutted into it. Removing the closet freed up enough space to create a cozy, two-person dining nook. A tabletop, crafted by the designer’s father, is bolted into the wall and pairs with bench seats crafted from an old church pew. “When I lived here alone for three years, I didn’t want to sit at the dining room table everyday,” she says. “This one little change made the most dramatic difference.” She went on to replace the gray Formica countertops with pale marble and swapped plain white plywood cabinets for spacious, vanilla- and moss-colored wooden cupboards with seeded glass. By extending the new cabinets up along the full height of the walls, she created much-needed storage space. Smaller-scale changes involved covering cracking plaster with Sheetrock, adding molding, and installing new light fixtures. A new palette of warm, rich colors, including golden yellow, deep red, and soft green, mix with strategically placed mirrors to create a cozy yet light-filled atmosphere. Cascading curtains and colorful ceilings emphasize the tall windows and the airy feel of the otherwise compact rooms. “My goal was to make this perfectly personalized for me. I had to work within a lot of constraints that I wouldn’t normally have to, but I think that’s what made it the most interesting design challenge I’ve had yet.”