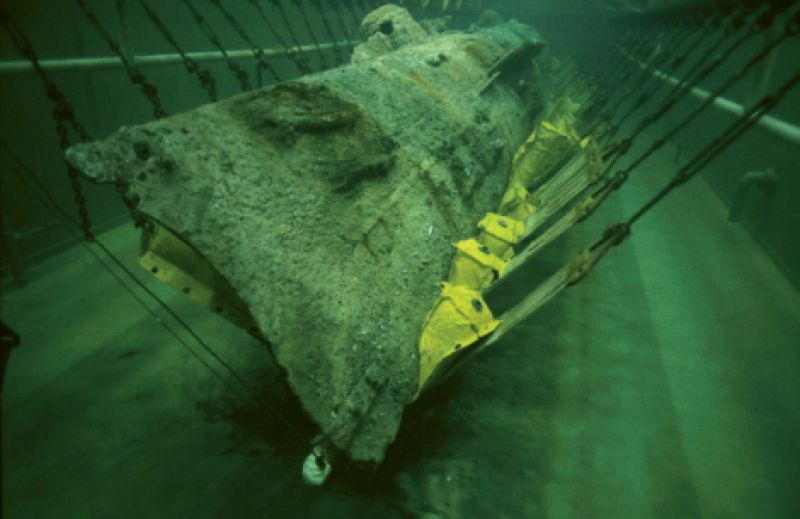 On a cold February night in 1864, eight men boarded the CSS H.L. Hunley and departed Charleston Harbor on a mission to sink a Union blockade. Unaware of the enemy lurking beneath the waves, the USS Housatonic was struck amidships by a barbed spar torpedo and sank in minutes. Following the attack, a Confederate officer on shore reported seeing the Hunley’s gas lantern signal, indicating the vessel was making its return. From that moment until its discovery more than a century later, the fate of the world’s first truly operational combat sub remained one of the great mysteries of the Civil War.

Then on August 8, 2000, after decades of fierce debate over the Hunley’s exact resting place, the sunken craft was finally recovered off Sullivan’s Island. Thousands traveled to witness the raising of the Hunley, and Civil War reenactors saluted the long-lost submarine as experts loaded it onto a special truss and transported it to a 90,000-gallon steel tank inside the Warren Lasch Conservation Center on the grounds of the former Charleston Navy Yard.

Faced with one of the greatest modern archaeological challenges, caretakers of the Hunley planned to complete several years of research before allowing public viewings. But their offices were soon flooded with calls from historians, educators, and well-wishers who clamored to see it. “One elderly caller said she wouldn’t be around in 10 years, so we needed to let her see it right now,” recalls Friends of the Hunley executive director Kellen Correia. “We realized early on that we needed to balance the scientific priorities of the find with our responsibilities as caretakers of this tangible remnant of American history.” A tour schedule was arranged, and interest remains intense: the site draws more than 30,000 visitors annually.

As for the 10-year anniversary, researchers concede that the date means more to the public than to the small investigation team. “It’s a good time to look back and reflect,” says senior archaeologist Maria Jacobsen, “but we expect our recovery work to continue for another four or five years.” Major scientific milestones have included the discovery of Lt. Dixon’s storied gold coin and the recovery, identification, and burial of all eight crew members (with the aid of forensic scientists, facial reconstructions of each were completed and are on display). Soon, researchers will peel off the thick layer of cement-like sediment covering the hull and rotate the vessel from its present 45-degree angle to rest evenly on its keel.

But much work remains to uncover a definitive explanation of the Hunley’s disappearance. Salt water, marine life, and 136 years of sand and silt have made for a very cold case. Using the latest laser imaging technology and archaeological techniques, researchers hope to eventually answer the questions that have fueled Hunley legends for more than a century. “A week’s delay would cause major problems in the investigation of a car or plane crash,” Jacobsen explains. “We’re sifting through more than 100 years of confounding factors to find the truth.” —Jon Yarian