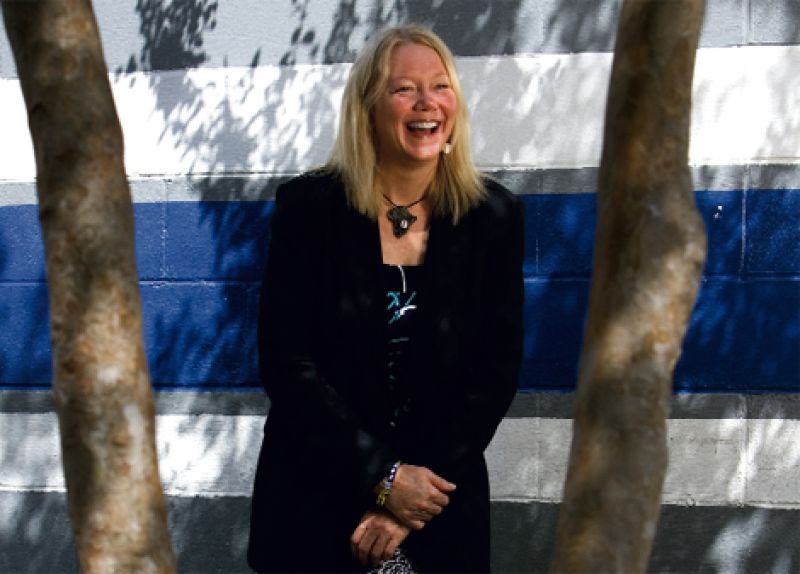 Cynthia Cupit Swenson occupies a small table at Kudu Café, the coffee shop she frequ­ents “because I just miss Africa,” she says poring thr­ou­gh an album of photos. The blond in the cowrie jewelry exudes that quality one occasionally encounters: the completely approachable person you feel drawn to embrace after your first meeting.


It’s a powerful trait, and one that has no doubt served her well. Swenson is a researcher and clinical psychologist at MUSC. Her work focuses on troubled youth and families, and she strives to curb family violence through projects in Colorado, Connecticut, and Australia. “We work to turn troubled children into adults who can become good parents and neighbors,” she says, adding that families in Australia are suffering the same stresses and strains as those here. “And yet everywhere we turn, even in the most troubled communities, there are people who care about making the world better for their children.”


It is precisely that spirit that drew Swenson to Union Heights, to the Djole Dance and Drum Group, and ultimately to an African man named Powerful, whose dream is to end the HIV/AIDS epidemic that has brought his beloved homeland of Ghana to its knees. And it all began as a research project.


Earning Respect
Union Heights is a hardscrabble community tucked between Meeting Street Road and Spruill Avenue, a North Charleston neighborhood struggling to maintain a fragile equilibrium. Drugs, crime, poverty—name a 21st-century urban malady, and it has taken up residence here. But also resident is a thriving vein of hope and a committed band of adults focused on changing the future for the young people in their charge.


Swenson arrived there in the 1990s to launch an MUSC study of Multisystemic Therapy (MST), which treats the individual by working to strengthen his or her “habitats.” Upon shoring up of the most critical habitat, the family unit, MST then focuses on creating a strong, healthy neighborhood. Ultimately, the radiating rings of strength can change entire cities and cultures.


Swenson has seen it happen. In Union Heights, families in crisis would call her for help at 4 a.m., and she would come running. One such night, she recalls turning the wrong way and finding herself in an abandoned block, alone with a known drug dealer. “He waved me down, and I stopped,” she says, noting it was not without some trepidation. “I figured, ‘This is it; I’m putting my trust in this member of my community.’” His message: “Doc, you better turn around. You’re going the wrong way, and you’ll get a ticket.”


In retrospect, Swenson says she had worked hard toward that chance encounter. “When you take on this work, you become a part of their communities. There’s no holding back. You’ve asked to be let into their lives. You’ve gained the trust of their community leaders. You’ve promised to listen, not tell. And you’ve proven you’re not ‘in it’ with the police. That’s when this really starts to work.”


Eventually, funding for Swenson’s work in Union Heights dried up. Yet she lingered, too personally engaged to leave. Around that time, members of the Gethsemani Circle of Friends Community Center began to form a children’s dance troupe. Specializing in West African dance, the Djole African Dance and Drum Company welcomed children aged seven to 17 to learn traditional dance and be a part of something special. “I stayed on for the dancers and drummers,” she says. “After all, these parents share their children with me, I can’t leave. They are the number-one parents, and I hope that I am number two.”


“Every child in the world is Cynthia’s child,” says Samuel Nkrumah Yeboah, founder of the Nkabom Artists and Craftspeople Association based in Accra, Ghana. His name, which means “powerful” in Ashanti, is a constant thread in Swenson’s retelling of the story of how the Djole dance and drum troupe visited—and was forever changed by—Africa.


It started innocently, as “Doctor Cynthia” sought a set of professionally made drums for Djole. In a serendipitous chain of events, a friend referred her to a master drum maker named Powerful. Swenson e-mailed him seeking those drums, and he replied, seeking an answer to his prayers. “I prayed to the universe to bring together people to share our passion, to use music and dance to address our HIV/AIDS and environmental problems.” Through their correspondence, Powerful suggested Swenson bring Djole to Ghana to perform, and to bring back to the U.S. Ghana’s call for help.


“Truly, I had no idea what I was saying yes to,” says Swenson, laughing at the folly of it. After all, Djole was populated by children with no access to funding. Most had never flown on an airplane. As she researched it, she found the trip would cost $4,000 a person. She would also need a team of adults, including health care workers. It hardly seemed possible.


And yet last August, two years after they began their pursuit of funds and friends, the Djole group arrived in Ghana to perform. Pooling money they raised through fish fries and selling water on the Battery (along with generous grants and donations), the kids arrived in Africa to perform with Nkabom (which means “coming together” in Ashanti) and interpret the ravages of HIV and AIDS through music and movement. They performed in orphanages and schools, in villages and cities. Their work was broadcast on national television and earned the kudos of world leaders, such as Desmond Tutu and Bill Clinton. And through it all, the Charleston Djole dancers told the story of AIDS. They acted out the sad story that has come to seem all too familiar for so many in Africa: the lovely, lively young woman called by her desire and felled by the disease that has killed so many.


When they weren’t performing, the Djole dancers toured. One chaperone, a Union Heights community leader in her eighties, was greeted in a village by one elderly woman who proclaimed: “You’ve come home.” The group visited a “slave castle,” walking the pathways that had long ago led captive men, women, and children, each step taking them farther from their homeland to ships bound for places as foreign and faraway as Charleston, South Carolina.


Swenson, notes that many tears were shed during the visit. Witnessing grinding poverty and seeing so many sick children took its toll. “And it’s not always AIDS,” she says. “It’s malaria, and a host of other illnesses that we could easily treat at home. These kill children in Africa.”


One day, toward the end of the visit, Swenson said her kids were discussing how in America, where they had so little compared to others, they often felt so unhappy. Yet in Africa, where children truly had nothing, they seemed so happy. “It was eye-opening to them to see children joyfully playing with tin cans as toys and happy to eat something—anything at all. They felt called to help.”


And so they are. This month, Powerful and the members of the Nkabom Artist and Craftspeople Association will arrive in Charleston to perform with Djole African Dance and Drum Company for a charity gala. Every dollar raised will go to fund Project Okurase, an education center that will provide skills training in sustainable methods. Its purpose is simple: to strengthen the community by strengthening families. Through Project Okurase, Ghanian families will acquire the skills necessary to make a living wage. Participants will also gain environmental literacy. A special focus is being placed on women and girls, emphasizing the education of female children.


For Swenson and Djole, they’re all worthy of support. But the most compelling idea may be this: women served by Project Okurase are asked to commit only one thing in return. They must be willing to expand their families, to welcome into them children orphaned by AIDS.


And so it comes full circle, as a proper African story will. It’s one of the woman who seeks to make communities healthy, one family at a time—the doctor who loves all children and seeks to make a loving home for more of them.

The Family Services Research Center at MUSC, the nonprofit Gethsemani Circle of Friends, and Nkabom Artist and Craftspeople Association of Accra, Ghana will host an evening gala, including an African photo exhibit and African dance and music performances by Nkabom and Djole, on October 27 at the Francis Marion Hotel. Tickets are $100 and proceeds fund Project Okurase. (843) 452-1310, www.projectokurase.org