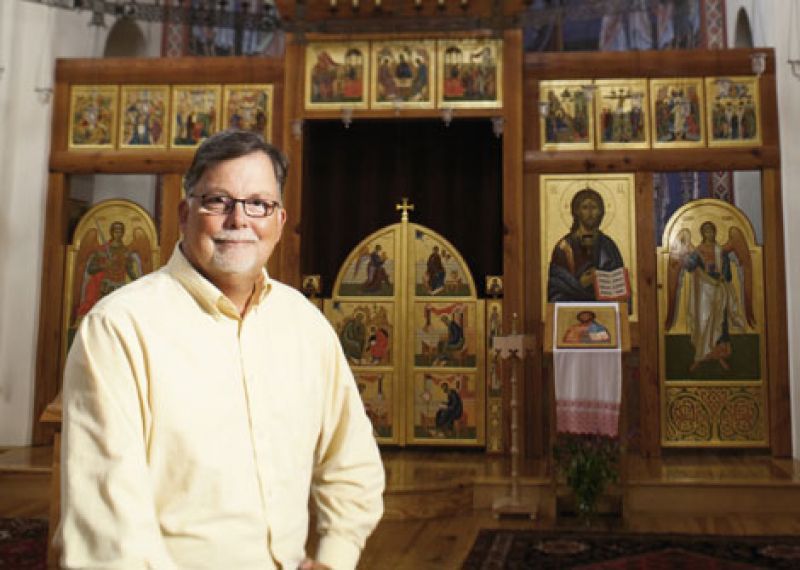 Before the parishioners of present-day Holy Ascension Orthodox Church worshipped in their stunning Byzantine building in I’On, they said prayers in a funeral home. “It was a blessing to have a facility for services; several times there were coffins in the next room,” says graphic designer Chuck Bates, recalling the vagabond years of the church he helped found with his Russian Orthodox wife, Suzanne. “Then we moved our services to a retirement home, but we set off the fire alarm too many times with our incense and candles.”

Today, the congregation of 100 says prayers in a breathtaking iconostasis-adorned, five-domed traditional Orthodox church, and it’s in large part thanks to Bates’ creative handiwork and business savvy. He crafted three of the wooden crosses topping the domes by himself. He negotiated for the land, which was funded through a gift from I’On developer Vince Graham and his family. He dreamed up and designed the Alleluia! magazine that helps fundraise for the church. And he created and updates the church’s website.

“There’s scripture that says, ‘Unless the Lord builds the house, those who build it, labor in vain.’ It’s important to remember. You can build a beautiful building and have no love in there. If you build the love first, the church will come. Sure enough, that’s what happened,” says Bates.

But while he is quick to give it all up to God, congregation members know what a significant role he played in making the vision happen. “Chuck is always the first to arrive and the last to leave,” says Father John Parker, Holy Ascension’s priest. “He leads by example. Not only was he instrumental in getting the land, helping with the architectural plans, and finding a contractor, he also helped tile the bathroom floors, among other things.” For Bates, that’s just part of the commitment he made when joining the Orthodoxy.

“A visiting priest recently called Orthodoxy ‘the Marine Corps of Christianity’,” he says. In the tradition, not only are congregants asked to attend church three times a week—Sunday morning, Wednesday night, and Saturday evening—but they stand the entire time, and every service is sung from beginning to end a cappella. “For years Chuck never missed a service. And, he would tell you himself, one of his gifts is not singing, but he loves to sing and so he sings in the choir,” says Father Parker. “It’s another example of his dedication. Even though he’s not a contractor, he found one. He isn’t an architect, but he helped guide the building design. And he’s not a singer, but he’s willing.”

Crosses handcrafted by Bates: 7 (3 personally and 4 more with friends)
Families when the Bates helped found the church: 5
Parishioners today: 100
Years Bates has served as parish council president: 8 of the mission’s 10 years. (He asked for a 2-year break!)
Funds raised by sales of his Alleluia! magazine: $9,000+