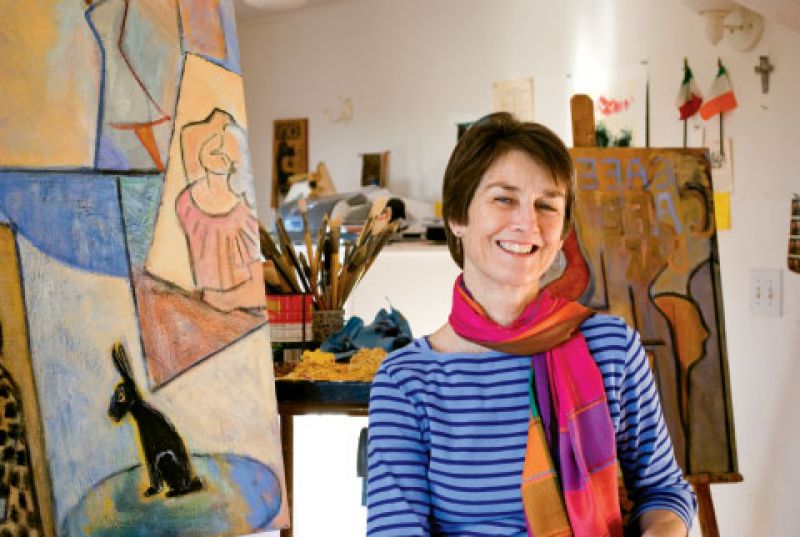 Inhabitants of Mary Walker’s oil paintings and prints exist in a long-gone environment where women remain preserved in contemplative states. Linear boundaries confine darkly outlined yet muted figures to one side of the canvas, while secondary figures remain in shadowy silhouette. The characters aren’t necessarily happy, but the intimate scene evokes a longing for an inherently better time. Late Charleston artist James Innes noted that with the contents of her paintings, Walker becomes a problem solver. “If there is no struggle [with the subject], the painting doesn’t evolve,” she says.

The North Carolina native devotes herself daily to this battle with a brush in her home studios and while traveling, often to Italy, visiting print studios wherever she goes. Sketchbooks are integral to her work, and early drawings often find their way into her paintings and prints, although she admits to not knowing where the work will go when she begins. “One of the most fascinating things about a painting is witnessing how it will turn out,” Walker says.

Her solo exhibition “On the Stage of Life,” at the Corrigan Gallery this month, is no exception to the artist’s exploration of the canvas. The 10 new works were originally inspired by operas such as Porgy and Bess, Black Coffee, and Norma, but when she became frustrated—a common occurrence in her creative process—the paintings evolved into universal themes of love and loss.
Walker admits that she goes through a lot of self-doubt whenever she works. “It takes me a lot of time to finish a painting,” she says. “I start thinking ‘Is it good enough?’ ‘Why do I bother doing this?’ ‘What’s the point?’ But I push through and the end result is always far better and more interesting than I would have ever imagined.” —Kristen Rhodes