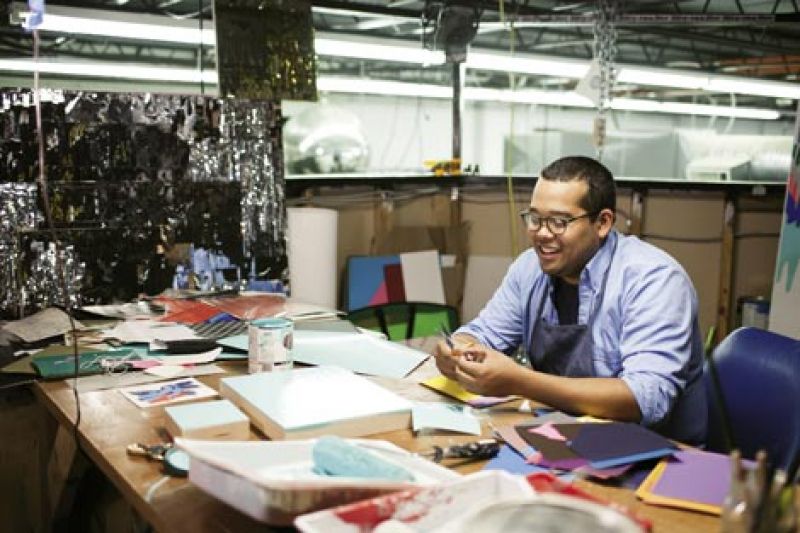 A recent College of Charleston studio arts and arts management graduate, Conrad Guevara says he notices things that others don’t—such as the icebox outside the T & L grocery store on Rutledge and Spring that someone tagged with graffiti. “The owner had to white-out the tag, and the paint he used dripped down the side over two beautiful stripes. It blew my mind,” Guevara says, explaining how such things inspire his own mixed-media art.


Leaning over a long table covered in scraps of paper as he works in his attic-like studio at Redux Contemporary Art Center, Guevara has the look of a child in a king-sized playroom. That playfulness makes him a popular printmaking, painting, and drawing instructor among the seven- to 10-year-olds he teaches at Redux several afternoons a week. “He is amazing with kids and a very talented artist,” notes Redux director Karen Ann Myers.


Guevara, who says much of his work is influenced by a limited budget and affordable materials, turned a bag of yarn he found on the street into The Digestor, an eight-foot multicolored group of crotcheted tentacles filled with batting. (He learned to crochet thanks to a YouTube video.) The entrail-looking creature is meant to hang from the wall in droopy tendrils and is, according to Guevara, “funny and ridiculous.”


Other works range from 2-D to 3-D, too, and his current batch of 2-D pieces—cut paper and paint on 48- by 48-inch latex-painted panels—are collages of pale pink, teal (his favorite color), yellow, and green in abstract drips and tags that make “a visual confrontation of pretty images,” he says.


For Gimmie, Gimmie, what Guevara calls a 2.5-D work, he glued strips of Mylar balloons to a large panel. When the pieces move in the wind, the art becomes interactive as it rustles back and forth. “The Mylar pieces suggest an individual’s thought process, how people see themselves in a million different pieces, and how their moods and attitudes change,” he says.


Inspired by street art, flashy music videos, and his childhood experiences with crafting, Guevara says children influence his attitude and encourage his “goofy” sense of humor. He is also influenced by abstract expressionist painting but runs it through his own filter. “I use what I like and make it my own,” he says. 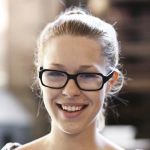 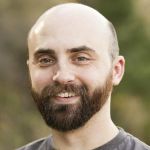 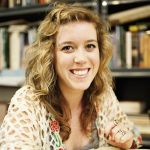 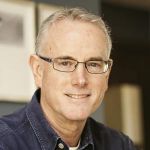 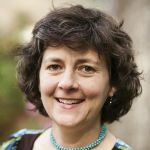 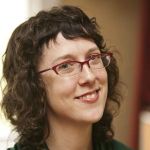