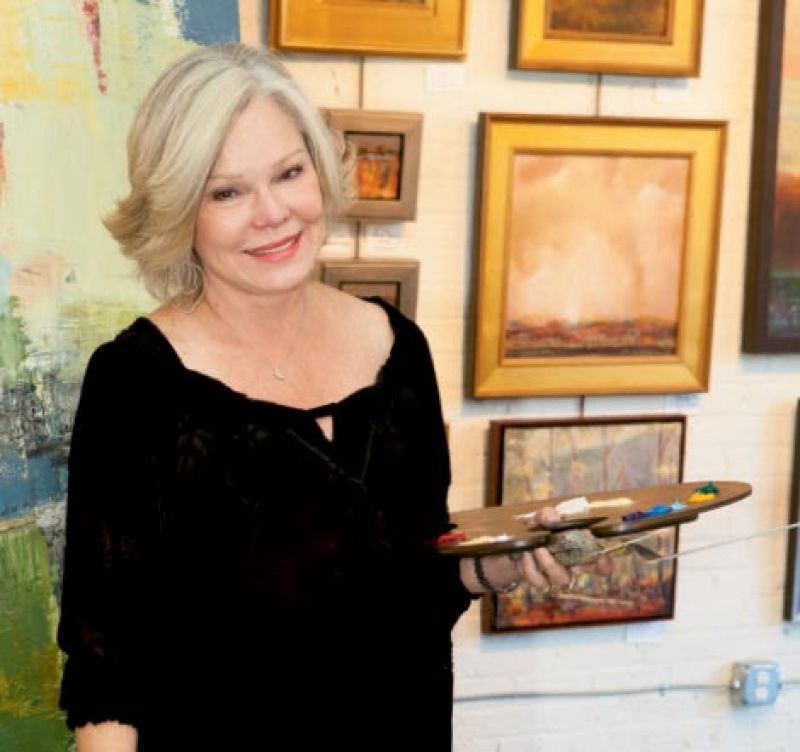 Inspiration struck Karen Weihs in the middle of the night. It was 1992, and the mother of two was just launching her painting career. Between tending children and helping her restaurateur husband, Chris, with his ownership duties at Carolina’s, hours for painting were elusive.

“I had this idea for a 52- by 48-inch canvas, and I couldn’t find time to do it,” recalls Weihs. “It was really bugging me, so I got up in the middle of the night and painted until dawn. That piece, The Shaman, is still hanging over my fireplace today.”

Weihs relates the story as an explanation of how art should be therapeutic. During the instructional sessions she often teaches and attends from Telluride, Colorado, to Monhegan, Maine, she emphasizes “expanding the emotional palette,” and her own works contain deep layers, both literally and figuratively. With her trademark palette knife, a three-inch-wide blob of paint finds itself transported onto an image in mere seconds—“sort of like topping off a cake,” she says.

While her work draws heavily from both the salt marsh vistas of her Lowcountry upbringing and the Blue Ridge Mountains of Cashiers, North Carolina, where she lives part-time, Weihs is anything but a typical landscape artist. Even pieces that begin as plein air studies of a barrier island or sunset over a valley can take on profound abstractions as they develop into full-size works in her studio.

“People in Charleston love to look at abstract art, but getting them to have it in their homes is a harder sell,” says Ella Walton Richardson, whose Broad Street gallery recently hosted Weihs’ second major showing in as many years. “When I saw the direction that Karen was going in, I knew it was right.”

“The intuitive bent is really strong in me,” comments Weihs. “I might walk around for awhile finding something to depict, but when I do, the painting process is fast and natural.” Identifying with the Impressionists and early 20th-century Tonalism, she also cites late Charleston watercolorist Alice Ravenel Huger Smith as an early inspiration. “She moved the paint so fluidly,” says Weihs. “I’m still trying to find that.”

On November 3, the public can witness Weihs in action when she participates in the Painting in the Park event that’s part of Charleston Fine Art Dealers’ Association’s Fine Art Annual. “I’ll be looking for something in the landscape, maybe some part of the park, but if it turns into something a little more abstract, then I’m just going to let it go,” explains Weihs, adding that painting with an audience comes naturally. “It’s fun when people come up and start to interact. I draw that energy into my work.”

Although it’s rare to find Weihs painting at 3 a.m. nowadays, she maintains her prolific output through daily diligence to her craft. In explaining her approach, Weihs cites a passage from Robert Henri about the moments in our lives when we catch a glimpse of a deeper layer of existence. “It’s easy to paint what you see,” she says. “But I’m trying to see beyond to capture those deeper layers.”