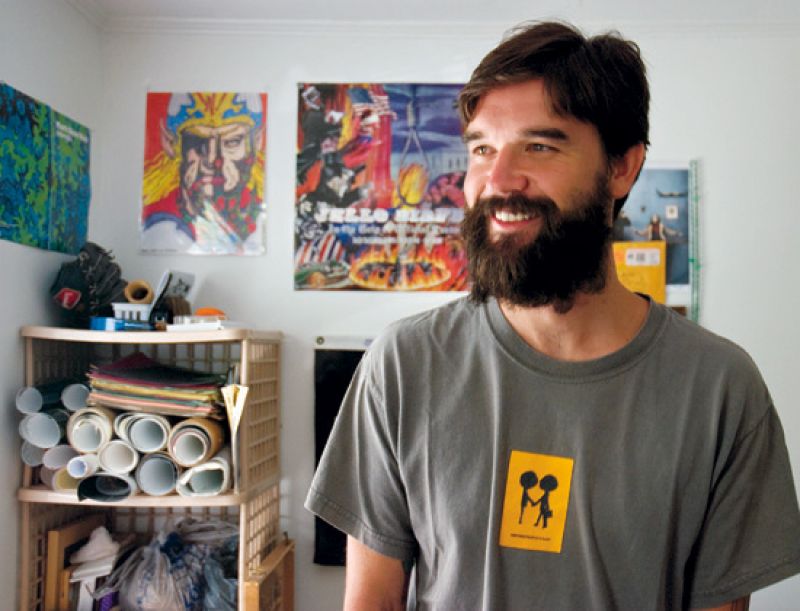 Brian Bustos has never gone to art school. He’s never even taken a painting class. Born into a nomadic military family, he claims an introverted boyhood of doodling, coloring, and cartoons to be his only training.

This self-taught artist, who showed more than 50 drawings, six large paintings, a slew of small-scale sculptures, and an original film in a hot-selling feature event at Eye Level Art in June, calls himself quiet and aloof, but his bold, whimsical paintings tell stories that speak volumes.

Working with all kinds of material, from garbage-scavenged paper to old cardboard, wood, and antique book pages, Bustos uses solid, vibrant colors and simple figures to tell stories with philosophical undertones. “My work exhibits influences of the cartoons from my childhood, but I try to take them in a spiritual direction,” he says. “It’s about life, choosing right or wrong, exploring the contrast between light and dark, heaven and hell.”

Take, for example, his ongoing tales of a soft-spoken, wandering alien named Ker-ij (pronounced “courage”). Inspired by sketches from the New York City subway, Bustos’ Ker-ij works explore the strangeness of Earth and hardness of society as seen by a complete outsider. Through this character’s journey to find color, happiness, and strength, Bustos projects not only his own personality, but also his perspective of the world as a place where humans choose to bind themselves to a cold, monotonous reality, where gray, muted tones challenge bright, cheerful ones. As the story progresses, though, the artist blends his dark observations of human nature with a message of hope that comes from viewing the world like a child. “Brian’s art appeals on so many levels—the work surrounding the Ker-ij character embodies a childlike purity and innocence that transcends age, gender, and background,” says New York-based collector Jodi Merola. “It’s comparable to Antoine de Saint-Exupéry’s The Little Prince—a huge statement in my book.”

“My canvases are childish and simple, but my subjects bear very grown-up themes. This way, anyone can take something from my work, whether they’re six or 60,” the artist explains. “I wouldn’t even call it fantasy, because really, it’s not that out there. The message is clear, tangible, and in front of your face.”

The accessibility of Bustos’ work has given him an edge on the Charleston art scene, making him, in the words of Mike Elder of Eye Level Art, “an artist to watch.” His pieces have been sought by both comic-loving teenagers and seasoned collectors looking for up-and-coming talent. “Brian’s work touches on a side of the human psyche that we can all relate to,” says Elder.

From his Folly Beach studio, Bustos is presently preparing for a November exhibit of his work in Portland, Oregon, where he has also been contracted to publish his first hand-bound and -printed book of illustrations. Despite all of the other stories swimming in his head, he plans to keep going with Ker-ij, a character that, he says, continues to teach him much about confronting his own inhibitions. “My art gives me the courage to face my fears,” explains Bustos. “It’s a constant journey that is awesomely weird and unexpected.”