A Decade in the Reading

A Decade in the Reading
June 2010
Local college English professors revisit their favorite books published in the last 10 years.


SOUTHERN FICTION
Sean Heuston, The Citadel
Jim the Boy by Tony Earley ($25-$14, Little Brown & Company, June 2000)
Critics do backflips over Tony Earley’s writing, and for good reason. Writer Scott Turow (who knows a thing or two about crowd-pleasing novels) compared Jim the Boy to The Kite Runner, The Lovely Bones, and The Five People You Meet in Heaven, asserting it “is just as good as those books, engrossing in every way, and deserves even more attention.” Beautifully told in direct, clear-eyed words, this is a simple story of a boy growing up in rural North Carolina during the Great Depression at the center of a warm and funny extended family that tries to make up for the premature death of his father. It’s one of those rare real-world novels that kids can digest and adults can savor. 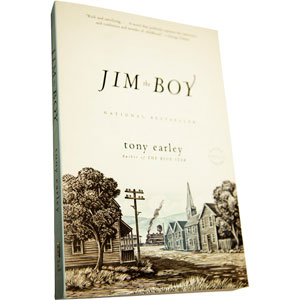 CONTEMPORARY FICTION
Susan Farrell, College of Charleston
Extremely Loud & Incredibly Close by Jonathan Safran Foer ($25-$14, Houghton Mifflin, April 2005)
Jonathan Safran Foer writes funny novels about tragic events. His first, Everything is Illuminated, explored the Holocaust through the eyes of a Ukranian would-be playboy obsessed with American pop culture, and Extremely Loud & Incredibly Close takes on 9/11. Narrated by young Oskar Schell, who sets out to discover the meaning of a mysterious key left by his deceased father, the book is both an ode to New York City and a contemporary fable about the things people do for love. While the novel moves back and forth in time, linking experiences during the Allied bombing of Dresden to the present disaster, it is Oskar’s voice that gives life to the story. Bewildered and deeply sad, the precocious nine-year-old is sustained by his curiosity, inventiveness, and basic kindness to those around him. 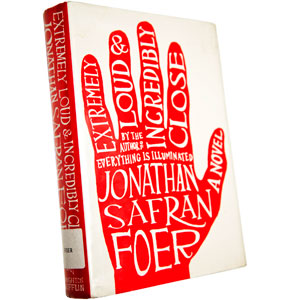 MEMOIR
Carissa Smith, Charleston Southern
Waiting for Snow in Havana by Carlos Eire ($25-$15, Free Press, February 2003)
In Waiting for Snow in Havana, Carlos Eire recounts his childhood in Cuba before and during the early years of the Revolution. Airlifted to the U.S. at age 11, Eire paints the land of his youth in vivid colors. His memoir is organized not by strict chronology but rather themed vignettes, and one of the most powerful recurring threads is judgment and forgiveness—for the sins committed both by and against his family. Catch up on Waiting for Snow in Havana this summer, as the sequel, Learning to Die in Miami, will be published in November 2010. 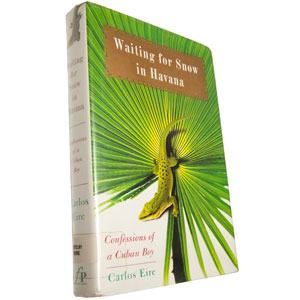 HISTORICAL FICTION
Licia Calloway, The Citadel
Song Yet Sung by James McBride ($26-$15, Riverhead Books, February 2008)
Featuring unforgettable characters like “the Dreamer,” a fugitive slave visionary; “the Woolman,” a legendary denizen of the wilderness; and beautiful Patty Cannon, ruthless head of a posse of slave traders, this action-driven novel appeals to suspense thriller fans as well as those interested in neo-slave narratives and the impact of slavery on contemporary culture. Set on Maryland’s turbulent Eastern Shore, birthplace of Harriet Tubman and the incomparable Frederick Douglass, McBride’s saga reinvigorates the mystery of Underground Railroad operations, enticing readers to attempt to crack “the Code.” 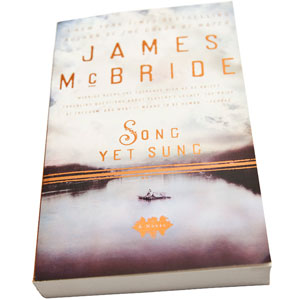 SHORT STORIES
Anthony Varallo, College of Charleston
My Father’s Tears & Other Stories by John Updike ($26, Knopf, June 2009)
John Updike is one of those writers so worthy of being read that he is seldom read. Updike, who died last year at the age of 76, is perhaps the finest prose stylist America has ever produced, but you might not know it if you’ve only tried his novels; Updike’s short fiction affords a better view. My Father’s Tears, his last collection, is also one of his best. Through these 18 stories, the writer gently asserts that the past is always alive in the present, in sentences so brightly lit you’ll need sunglasses—the perfect summer read. 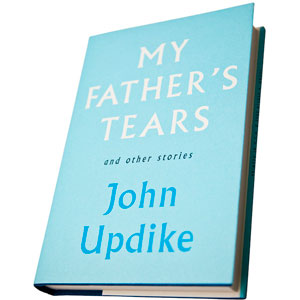 POETRY
Paul Allen, College of Charleston
American Rendering: New and Selected Poems by Andrew Hudgins ($25, Houghton Mifflin Harcourt, April 2010)
American Rendering is a perfect book for summer, the time when we want to be lost in stories and, in doing so, gather ourselves. I know of no one’s poems that accomplish this as well as those of Andrew Hudgins. Each poem tells a story, and each story seems to touch us, move us, and often, shake us. As much as any poet since Frost, Hudgins writes for the general audience who has given up on modern poetry as too difficult or too self-centered, as well as the serious poetry follower who wants well-crafted poetry that says something that matters. 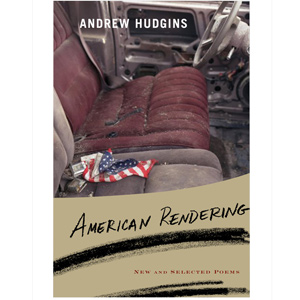 MEMOIR
Jennifer Bernstein, The Citadel
Committed: A Skeptic Makes Peace with Marriage by Elizabeth Gilbert ($27, Penguin Group, January 2010)
With wedding season upon us, it’s easy to get swept up in the activities leading to the big day, whether that day is yours, your friend’s, your daughter’s, or even your mother’s. But make sure to treat yourself to Committed: A Skeptic Makes Peace with Marriage, Elizabeth Gilbert’s follow-up to Eat, Pray, Love. Gilbert’s account of finding her “own little corner within matrimony’s long and curious history” is filled with tidbits that’ll make for engaging conversations at all of the upcoming celebrations. Most importantly, it’ll get you thinking more deeply about the forms of intimacy that structure your own life. 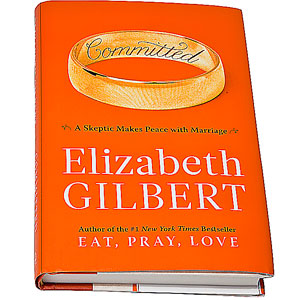 CONTEMPORARY FICTION
Scott Yarbrough, Charleston Southern University
The Signal by Ron Carlson ($26-$14, Penguin Group, May 2009)
One of the great unsung heroes of contemporary American literature is Ron Carlson. His excellent 2007 novel Five Skies showed he was more than a writer of extraordinary short stories. His next novel, The Signal, is a short, tautly written book about a young man who hopes to put his life back together and, if possible, reconnect with his ex-wife. For years, Mack and Vonnie would go camping in the Wind River Range of mountains in Wyoming. Somewhere along the line, Mack lost his way just as he lost his father’s ranch, and now after a brief stint in prison, he hopes to make things better again on this return to the wilderness he loves. The tale of reconciliation becomes a story of courage, however, when the two encounter poachers. The novel will appeal to both fans of smart, tightly written prose and those of page-turning thrillers. 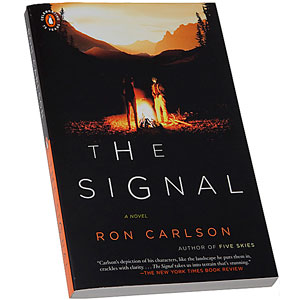 FANTASY
Lauren Rule, The Citadel
The Year of the Flood by Margaret Atwood ($27, Knopf Doubleday, September 2009)


Providing alternate perspectives on the biological terrorism depicted in her previous novel Oryx and Crake, Margaret Atwood’s The Year of the Flood asks us to consider what we are doing to the environment and how we can develop a more sustainable relationship to the world around us. The novel follows the accounts of Toby and Ren, survivors of a devastating pandemic that wipes out almost all of the world’s population. Through their stories, we learn about the God’s Gardeners, a movement that grounds environmental stewardship in spiritual devotion, and other groups fighting for survival in a strange new world. 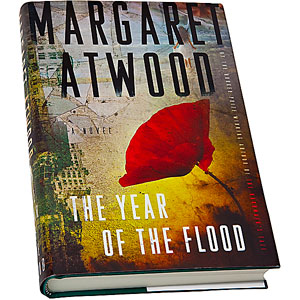 ROMANCE
Conseula Francis, College of Charleston
Captured by Beverly Jenkins ($7, HarperCollins, September 2009)
African American romance novels may be a recent development, but as Beverly Jenkins’ latest historical Captured reminds us, black love is not. The basic premise of this pirate romance is familiar—a pirate captain and his crew overtake and plunder a ship on the high seas, kidnapping a gentlewoman in the process. The details of this story, though, are what make it such a satisfying read. The pirate captain, Dominic LeVeq, is the biracial son of a French nobleman and a free black woman from Martinique. He has gathered around him a multiracial, multinational, motley crew of outcasts determined to be free. And Clare Sullivan is the enslaved black American woman who yearns for freedom, but who values the safety of her children more. Set on the eve of the American Revolution, Captured gives us characters seeking a revolution of their own—a world in which they can live, work, and love freely. 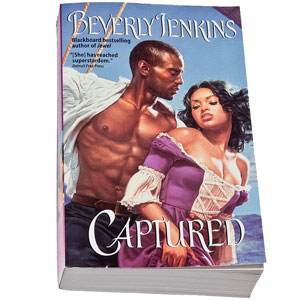 AFRICAN AMERICAN FICTION
Simon Lewis, College of Charleston
Someone Knows My Name by Lawrence Hill ($25-$15, W.W. Norton & Company, November 2007, also in paperback)
No slave narrative, not even Equiano’s, gives as comprehensive an account of African enslavement in America and the long walk to freedom as Lawrence Hill’s brilliantly compelling fictional reconstruction Someone Knows My Name. Kidnapped as a young girl in West Africa, transported to Charleston, and enslaved on an indigo plantation on St. Helena Island, Hill’s narrator, Aminata Diallo, is fortunate enough as a grown woman to be in New York during the Revolutionary War. Taking advantage of the British offer of freedom, she joins the refugees—all meticulously recorded in the Brits’ “Book of Negroes”—who establish a settlement of freedpeople in Africtown, Nova Scotia. The cold of Canada and continued racism drive her to join Thomas Peters’ trip to Sierra Leone, and eventually Aminata finds herself in London on the cusp of the banning of the international slave trade. Hill in no way mitigates the horrors of slavery, but Aminata rises above every challenge confronting her, making the novel as powerfully emotional and uplifting as it is informative. 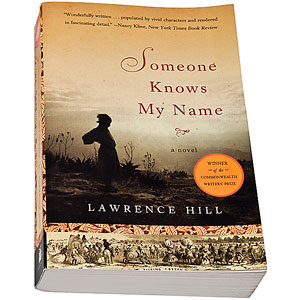 DEBUT NOVEL
Jeremy B. Jones, Charleston Southern University
Strange As This Weather Has Been by Ann Pancake ($16, Counterpoint, September 2007)
Ann Pancake (dubbed “Appalachia’s Steinbeck” by author Jayne Anne Phillips) weaves a compelling debut novel through the voices of a contemporary family living beneath a secretive, mountain-top-removal mining operation in West Virginia. Pancake equips her characters with richly regional prose and a frighteningly real web of plotlines: impending floods, decapitated mountains, and corporate threats. This book voices a traditionally voiceless region of the country and, in so doing, presents a genuinely complicated and charming family working to find its place in a shifting world. This is a novel you’ll want to pick up and put down all at once. 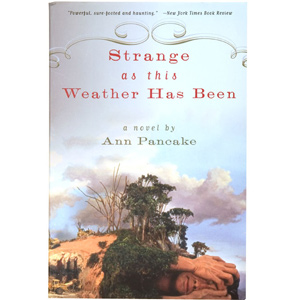 HISTORICAL FICTION
Joe Kelly, College of Charleston
1776 by David McCullough ($32-$18, Simon & Schuster, May 2005)
Everyone knows Washington’s heroic crossing of the Delaware, but how many know his crossing of the East River? Four months earlier, in the dead of night and in strict silence, the Continental Army slipped out of Brooklyn, out from under the muskets of the English and Hessian soldiers, and scrambled ashore at the tip of Manhattan. If not for a morning cloud of fog, the war would have been lost. David McCullough, famous for his biographies of Truman and John Adams, tells the fascinating story of the birth year of our nation, delicate and vulnerable as a fledgling and nurtured by dozens of remarkable officers in the citizen army. You know how it ends, with Washington’s boat nudging its way through the ice. In a fascinating and well-researched narrative, McCullough tells us how it starts. 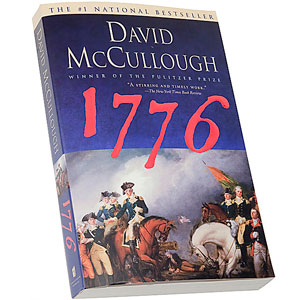 CRIME NOVEL
Scott Peeples, College of Charleston
Motherless Brooklyn by Jonathan Lethem ($15, Doubleday Publishing, September 1999)
Motherless Brooklyn is a clever, moving, and often hilarious detective novel narrated by a small-time crook with Tourette’s Syndrome. At its heart is the relationship between the narrator, Lionel Essrog—“Freakshow” to his cohorts at L&L Movers—and his boss Frank Minna, a not-so-small-time crook who takes him under his wing. When Frank is killed, the “Minna Men” scramble for position, and Lionel tries to solve the murder while confronting life without his protector. The real attraction of the book, though, is Lethem/Lionel’s self-conscious interweaving of verbal tics and wordplay; Lethem makes Tourette’s a central feature of the novel without resorting to caricature or sentimentality. 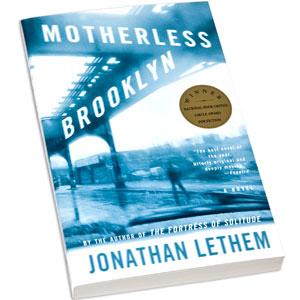 MEMOIR
Bret Lott, College of Charleston
One More Theory About Happiness by Paul Guest ($22, HarperCollins, May 2010)
This extraordinary new book is a quiet, stark, funny, and terribly moving memoir that begins with Paul Guest when he was 12, a boy in Chattanooga at the very beginning of summer, wobbling on a 10-speed bike just enough to fall and break his neck. But the book isn’t about his growing up a quadraplegic. It’s about the power of language, the power of courage, the power of not pitying oneself in order to find one’s way, for better and worse, in this world. 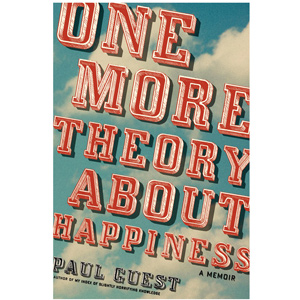