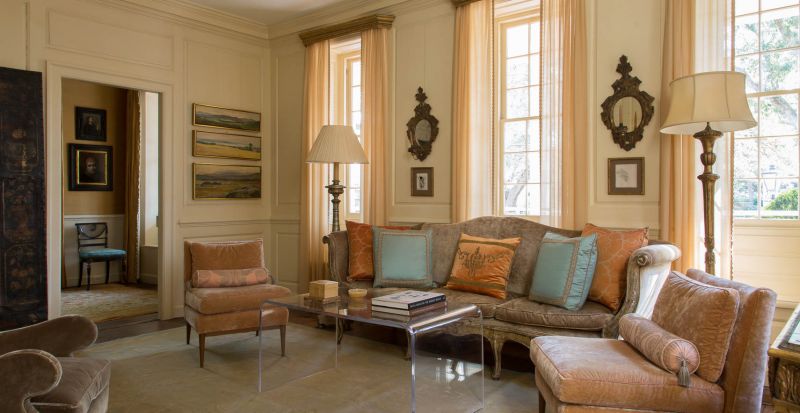 If it weren’t for the luxuriously appointed interiors—and the two adorable Cavalier King Charles spaniels frolicking underfoot—walking the rooms of the 18th-century South-of-Broad manse Ann Long Merck shares with her husband, Tony, would feel a bit like wandering the corridors of an art museum. There are beautiful canvases at every turn; even the butler’s pantry boasts a piece by Thomas Sully, a 19th-century master portrait artist whose work also hangs in New York’s Metropolitan Museum of Art and London’s National Portrait Gallery.

Their stunning personal collection is no surprise given that Ann is the force behind Ann Long Fine Art, the Broad Street gallery that this year celebrates its 20th anniversary. But Ann’s role as an art doyenne is a bit of a surprise to the lady herself. Two decades ago, when she popped by an exhibit of painter Jill Hooper’s work at a second-story loft on Broad Street, just a block east from where her own gallery now stands, she had no idea her life was about to change profoundly.

But while taking in Hooper’s exquisite still lifes, Ann was astounded and inspired. “My first thought was: nobody paints like this today. Who is this girl?” Ann recalls. She was particularly moved by one piece depicting a simple tableau of fish laid out on a wooden table. “It was like something by [Jean-Baptiste-Siméon] Chardin; it was one of the most stunning paintings I’d ever seen by a living artist,” she recalls. Ann bought the painting, and in the process, kicked off a lasting friendship that began with Ann sitting for Hooper, who paints from life, and led to Ann hosting invitation-only shows of Hooper’s work in her own home.

The exhibits were so successful that soon other classically trained painters, such as Frank Strazzulla, Jr. and Kamille Corry, were asking Ann to represent them. By 2001, she had transitioned the operation from her home to an official gallery space, and since then, she has built an impressive stable of artists, ranging from contemporary classical realists like Hooper to 20th-century modernists, including the late William Halsey.

Running parallel to Ann’s love of fine art is a deep appreciation for architecture that extends back to her childhood in Walterboro, South Carolina, and her mother. “She should have been an architect,” says Ann. “She had a real love of Palladio and the classical order.” She and Tony have lived in a number of old homes, and the two share a passion for preservation. “We weren’t actively looking but mentioned to a realtor friend that we wanted a small, architecturally significant home if one ever became available,” Ann says. And so in 2009, when a pre-Revolutionary, three-story brick manse with fine Georgian detailing hit the market for the first time in more than a century, the art dealer and her husband seized the opportunity to buy the place and make their home within the walls of an architectural masterpiece.

Dubbed the George Everleigh House for its first resident, a prosperous trader who made his fortune in deerskins, the circa-1743 domicile and its carriage house offered a treasure trove of special details, including cypress wall paneling throughout the public spaces and original Dutch terra-cotta pavers on the first-floor piazza. The structure’s interiors, facade, and Loutrel Briggs-designed garden are all protected by Historic Charleston Foundation easements, which means renovations are subject to the group’s approval. Rather than being frustrated by the restrictions, the Mercks found them reassuring. “This is just the kind of house we wanted: one that had been protected, and we wanted to do the same,” she says.

When the couple decided to respectfully update the structure for 21st-century living, they curated a team of conservation-minded experts, including restoration specialist Richard Marks and architect Christopher Liberatos, to help guide them. They also recruited design genius Amelia Handegan, renowned for turning out sophisticated rooms with a classical bent, to oversee the interiors. “I’ve known Amelia since I was 16, when she helped my mother with her house,” Ann says. “She’s really an artist, too, and her work is absolutely timeless and beautiful. I knew we were in good hands.”

With Historic Charleston Foundation’s approval, the Mercks reimagined the kitchen, positioned within what was once a rear piazza, with strikingly contemporary Bulthaup cabinetry and appliances. “Tony loves to cook, and instead of doing a kitchen that looks sympathetic to the period, he suggested making it as modern as can be,” Ann says. “Everything that encloses it is classical, but the kitchen itself is Jane Jetson-modern; we wanted that juxtaposition to be significant.” Historically appropriate details, such as patinaed wood pilasters and a brick wall that was once part of the home’s exterior, ensure that the sleek scullery feels in step with the rest of the space.

The team also focused on restoration, custom-milling replicas of door stiles as well as the cypress paneling for a wall and pocket doors that had been removed from the dining room by a previous owner. With the home’s classical bones recharged, Handegan began selecting furnishings and fixtures that complement the architecture, rather than compete with it. “Ann and I worked with an eye toward the same goals,” Handegan notes. “We wanted interiors that would reflect the integrity of the house, be livable, and serve as a backdrop for the ever-changing art collection.”

From apricot silk wall hangings in the foyer to pale melon paneling with a sienna glaze in the dining room, a serene, earthy color palette underpins the decor. “I lead a busy life, and when I get home, I want things calm. The house, along with Amelia’s palette, does that for me,” Ann notes. Atop these soothing hues, Handegan placed a mix of period-appropriate antiques, mid-century pieces, and contemporary furnishings; the accoutrements span centuries but live in visual harmony. Case in point: in the first-floor “morning room,” named for the beautiful light it catches at dawn, an 18th-century Venetian sofa and candle sconces keep company with mid-century slipper chairs and a Lucite waterfall table. A circa-1968 portrait by French painter André Minaux presides over the scene. “Something about her is intriguing,” Ann says of the painting’s subject. “She’s very modern, and it’s fun to hang her right over this Georgian fireplace. My general rule is 80 percent classical, 20 percent modern to give a space that certain twist.”

From room to luxurious room, gorgeous artworks draw the eye—including pieces by Hooper, of course, and other artists represented by Ann Long Fine Art, such as Alfred Hutty and Otto Neumann. Many are timeless masterpieces that, just like the Mercks’ residence, are destined to be around for centuries. “That’s the interesting thing about houses in Charleston,” Ann says. “Some have been here for 300 years. We’re just passing through. We do our best by them, because someday we’ll be gone and someone else will be living in them.”