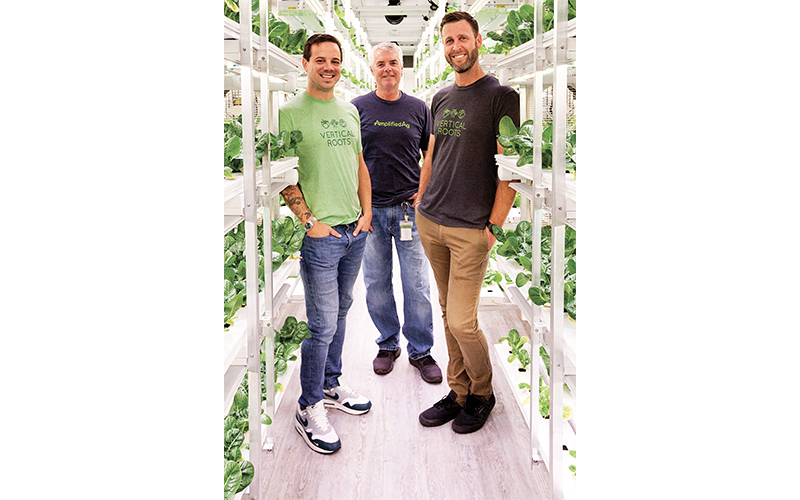 (Left to right) Andrew Hare, Don Taylor, and Matt Daniels have combined software smarts, engineering know-how, and agricultural passion in order to grow Vertical Roots, and parent company AmplifiedAg, into one of the leading container farms in the nation.

Till the soil, plant a seed, nurture it, see what grows. Farming is the original start-up—a monumental, paradigm-shifting innovation. Long before Silicon Valley, there was the Nile Valley, where our ancient ancestors began a dramatic shift from a nomadic hunter-gatherer economy to an agricultural one. Season by season since then, farmers have invested sweat equity in growing new foods, always tinkering with more efficient practices, more resilient business plans. It’s Entrepreneurship 101 at its best—where there’s no planting, there’s no harvest.

Vertical Roots, a Charleston-based agricultural start-up, is working to shift the paradigm yet again. “We want to revolutionize how communities grow and consume food,” says Andrew Hare, a founder along with his friend Matt Daniels. The two high school buddies reconnected in 2016, discovering a shared interest in farming. “Matt, a mechanical engineer by training, was experimenting with peppers and tomatoes. I grew up growing orchids,” says Hare. Curious about the potential for indoor farming, they began scribbling notes on the backs of napkins.

“We started with a small 10- by 12-foot space in a friend’s warehouse, where Matt soldered LED lights, and we built a little retention pond. We took downspouts from Lowes to make our first nutrient filter technologies, or NFTs, which is still how we grow today, only it’s a lot more sophisticated,” says Hare. They grew a few hundred heads of lettuce in their DIY system, and licensed the name Vertical Roots. Soon, they began selling lettuces at farmers markets and eventually to GrowFood Carolina. 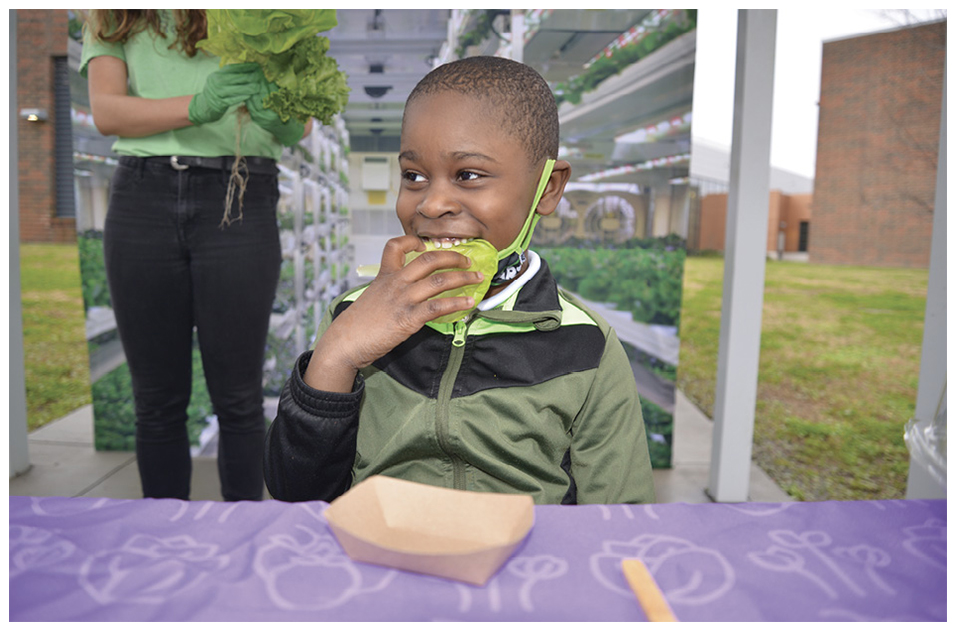 By 2018, Vertical Roots was growing in six containers in Summerville that provided fresh lettuce to Dorchester County schools and two containers on Daniel Island to service area restaurants. Meanwhile, AmplifiedAg secured a location in a large warehouse on Clements Ferry Road for manufacturing and software development, where Vertical Roots relocated its Charleston farm. Now the company headquarters, it has an R&D farm for experimenting with “the next generation of products, such as tomatoes and strawberries, to offer our customers and retailers,” says Hare.

After three and a half years of “massive growth,” according to Hare, Vertical Roots is now the largest indoor container farm in the world, with 120 containers in Columbia, 24 in Charleston, and a recent expansion to Atlanta, with plans to grow in Florida and North Carolina. Their seven types of fresh leafy greens (“Beautiful Butter” remains the best-seller) are available in more than 1,850 grocery stores, food service outlets, schools, and universities in 13 states. You’ll find them tossed in salads at Charleston’s finest restaurants and in school cafeteria lines.

The benefits of CEA farming are numerous—good for the earth, good for the gut, and pleasing to the palate. “Most people don’t realize that 95 percent of ‘fresh’ lettuce sold in stores is grown 1,000 miles away and is usually three weeks old,” says Hare. “Our mission is to be as close to the point of consumption as possible.” This proximity to the plate means lettuce is tastier and more nutritious, as well as safer. Because produce is grown without soil, risk of E. coli and contaminants is dramatically reduced. Vertical Roots’ fine-tuned technologies also mitigate weather risks and challenges that conventional farmers face, and result in 95 percent less water use, reduced labor costs, and higher yield. Plus, the growing season is extended year-round. 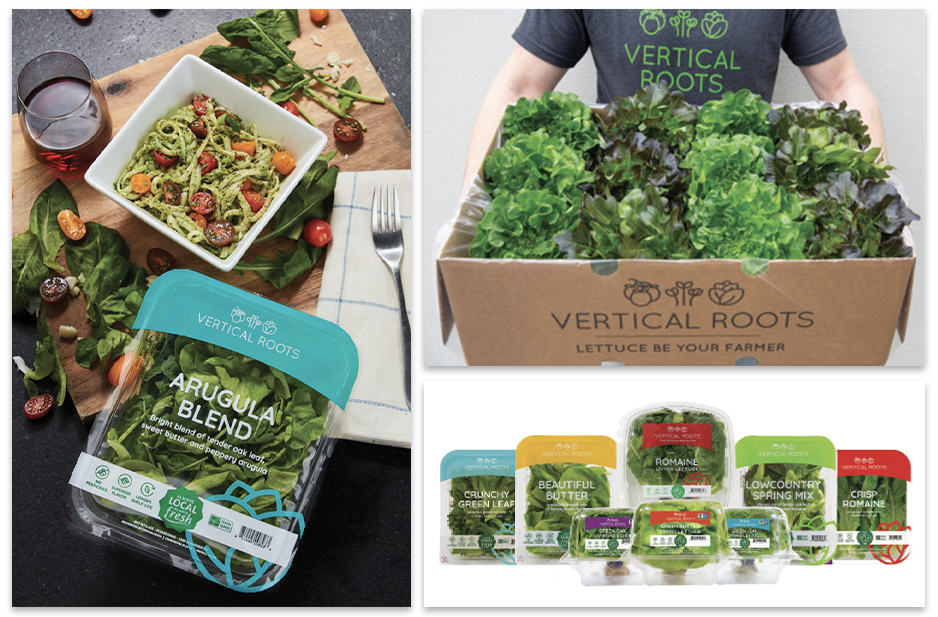 The pesticide-free greens are grown locally year-round. The technology requires a much smaller land footprint and significantly less water than traditionally grown lettuce.

While their growth has been fast and furious, Vertical Roots and AmplifiedAg remain privately capitalized. “We still feel like we’re playing in our own backyard,” says Hare, which suits him just fine. Though the company plans for continued expansion across the US and internationally, he adds, “that growth will come from right here in Charleston.”